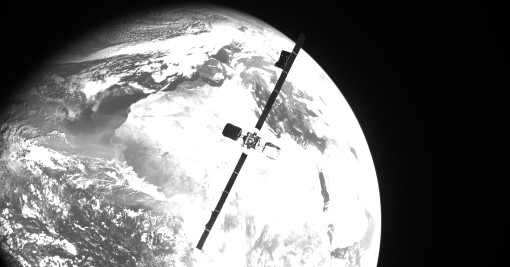 A robotic spacecraft just latched onto an active satellite in orbit


A robotic spacecraft from Northrop Grumman latched onto an old communications satellite in deep orbit and extended its lifespan by five more years. The Mission Extension Vehicle-2 (MEV-2) marked Northrop’s second successful docking of an object in space. The mission is part of the company’s efforts to kickstart an industry of life-extension services for dead, dying or errant satellites.

MEV-2 launched in August last year from French Guiana in South America. It spent six months raising its orbit to rendezvous with Intelsat’s 17-year-old communications satellite in geosynchronous orbit, more than 22,000 miles from Earth. That satellite was running out of fuel and was getting old; it had operated far beyond its expected lifespan while still providing broadband communications to three continents.

On March 12th, the MEV-2 craft started a month-long docking process with the Intelsat satellite. Docking was completed and confirmed successful by Northrop Grumman today at 1:34PM ET. It “was every bit as exciting and successful as the docking of MEV-1,” Joe Anderson, vice president of business development at SpaceLogistics, the Northrop subsidiary that launches MEVs, said during a press conference on Monday. Now, Intelsat’s IS-10-02 satellite can carry on beaming broadband communications to South America, Europe, Africa and the Middle East.

MEV-1 was Northrop’s first docking success last year, a breakthrough in its goal to spruce up dead or dying satellites and save satellite operators the cost of replacing them altogether. Extending the lifetime of satellites also helps tamp down space junk — a growing problem in orbit as the world launches record amounts of satellites to space each year. De-orbiting a satellite from geosynchronous orbit could take decades.

The Northrop-Intelsat servicing contract was a “win-win situation,” said Jean-Luc Froeliger, a vice president at Intelsat, during a press conference on Monday. The IS-10-02 satellite was performing well, Froeliger said, but without Northrop’s MEV-2, they would’ve had to deorbit it because it was running low on fuel.

MEV-2 is currently clamped to the back of IS-10-02, serving as the satellite’s life support by providing renewed power and navigation control. The two will operate as a “combined stack” for the next five years. After that, MEV-2 will undock from IS-10-02 and set off to rendezvous with another client satellite.

IS-10-02 will die after MEV-2 leaves. A company spokeswoman said the satellite will retire to a “graveyard orbit,” or the place in space where old satellites can turn into space junk without getting in the way of younger satellites.

Update Monday 7:10PM ET: This story was updated to add Intelsat’s response to a question regarding the fate of IS-10-02 after MEV-2 leaves. It will die.

Guide To Refresh Rates And Response Times In Gaming Monitors 2021