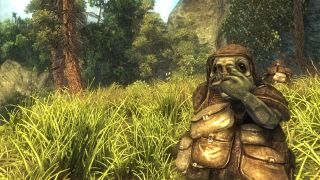 Risen comes out next week, on January 24. It’s a rough-around-the-edges and unforgiving, yet deeply immersive and interesting RPG, that also happens to have already come out 14 years ago.

Re-releases aren’t exactly unusual these days, but something intrigued me about this one. It’s not a remaster, or a remake—it’s just a port to PS4, Xbox One and Switch, accompanied by a modest update on PC. Though it still has players—the Steam version still gets about 100 concurrents a day—it’s not exactly an enduring hit in the way that, say, Age of Empires 2 is. To be frank, I’m not sure it was a smash hit even at launch—it certainly received a fairly mixed critical reception.

So why re-release it pretty much unchanged in 2023? Obviously, on some level publisher THQ Nordic is hoping to make a bit of money off some new sales—I’m not completely naïve—but it hardly seems like an obvious cash grab. Was there a social media campaign by fans? Or a spike in interest kicked off by an influencer? Is it laying the groundwork for a sequel? I felt like there had to be a bigger reason behind this seemingly innocuous release.

Not exactly a high-stakes mystery, but I thought it couldn’t hurt to investigate. After formulating a more diplomatic version of the question “Why are you doing this?”, I sent an email off to a THQ Nordic spokesperson. The answer was a pleasant surprise.

“[For] many years, THQ Nordic [has been] following the so-called “Asset Care” strategy. We’re often porting older games to new platforms or [e.g.] bringing a patch to the then 17-years old Desperados in 2018 to make it run properly with Win10.

“We think it’s important to care for older IPs, especially when they still have an enthusiastic fanbase. The first Risen was a great RPG following the design path taken by the Gothic series, and deserves another shot, especially since its console version back in 2009 was a very bad port. This new version will make Risen for the first time perfectly playable on all popular console systems.”

That’s… actually pretty cool? There’s something a little heart-warming about the publisher having an active policy of doing right by its older catalogue, especially considering this is a series THQ Nordic bought in 2019 along with a slew of others, not something homegrown. At a time when major publishers like EA and Ubisoft are happy to simply hoard IP, ignore their past games, and even pull the plug on new releases that don’t immediately perform, there’s care here for game history that’s refreshing to see.

As to whether a Risen sequel is in the works, there’s currently no plans—but they were keen to remind me about the in-development remake of its close sibling Gothic.

“At this point, we have nothing else to announce regarding the Risen franchise – but never say never. We don’t think many people really expected a Gothic remake and now it’s in full production. So let’s see what future holds for Risen.”

Let’s see indeed. And for those who are tempted to go back to Risen on PC in the near future, here’s what you can expect from next week’s free patch:

“The PC update will feature some gameplay fixes, gamepad controls/UI and achievements… as well as perfect compatibility with modern hardware (including Steam Deck) by using a DirectX 11 and 64bit technical architecture.”