There have been questions about 343’s future following Microsoft’s restructuring. 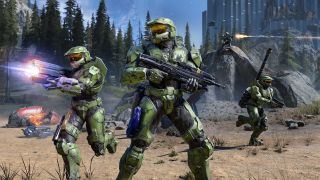 343 Industries studio head Pierre Hintze issued a public statement on Twitter (opens in new tab) declaring that the developer would continue to work on Halo. This statement comes just a few days after 343 was impacted by the 10,000-person round of layoffs at Microsoft (opens in new tab).

“Halo and Master Chief are here to stay,” The statement begins.”343 Industries will continue to develop Halo now and in the future, including epic stories, multiplayer, and more of what makes Halo great.”

It is unclear how many of those 10,000 workers Microsoft laid off were 343 developers. The statement seems to be in response to a story originating with French Halo influencer, Bathrobe Spartan (opens in new tab), who had previously leaked stories like the plans for a Halo Infinite battle royale mode (opens in new tab).

Bathrobe Spartan alleged that 343 saw a major restructuring of its role on the franchise, outlined here on ResetEra (opens in new tab) in English. Bathrobe Spartan specifically claims that 343 lost one third of its workforce including contractors, Halo Infinite missed its sales targets, and that 343 will step back into a “coordinating role” on the franchise as opposed to actively developing new Halo games.

One of the leaker’s claims, that planned Halo Infinite single player DLC was canceled and that this contributed to the departure of creative director Joseph staten, has been at least partially debunked by Windows Central managing editor Jez Corden: “There was never any campaign DLC in active development,” Corden tweeted (opens in new tab), “I don’t know how you scrap something that doesn’t exist.”

The same day as the layoffs, former 343 developer Patric Wren and contractor Nicholas Bird criticized 343 leadership (opens in new tab) for its direction on Halo Infinite and treatment of contracted workers, who were limited by Microsoft to 18-month stints at the company with mandatory six-month breaks in employment.

After a troubled development and seemingly successful launch, Halo Infinite unfortunately had a rough 2022 (opens in new tab), with a slow pace of multiplayer updates and significant delays on features like Forge and campaign co-op. Even with Hintze’s public assurance, Halo was already in a bad place before 343 took this hit, to say nothing of the human cost of so many workers having their lives upended.