The new M2 chips are looking good, but what about the fact there just aren’t any Mac games? 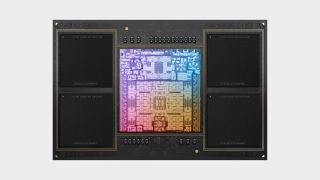 Apple’s new M2 chips announced this week, which will “enable console-quality gaming (opens in new tab).” So claims Apple, but is it true? What does it even mean?

Unsurprisingly, given this Apple we are talking about, no further details are provided. Apple doesn’t say which game console it might be thinking of, let alone any other factors like the game in question, resolutions, refresh rates, anything really.

But we’ll take Apple at its word and compare the new chips to the latest consoles. In pure graphics rendering terms, top of the current console pile is the Microsoft Xbox Series X (opens in new tab). Its AMD RDNA 2-derived GPU is good for 12.1 single-precision FP32 TFLOPS.

Now, TFLOPS is just one measure of performance, that of the pixel-processing shader cores. There are plenty of other important metrics, like texture processing or memory bandwidth, that contribute to the critical end result, namely frame rate.

Likewise, it’s tricky to compare GPUs across software platforms and APIs. 10 TFLOPs on a console isn’t quite the same thing as 10TFLOPs running on DirectX in Windows or Metal in MacOS.

But as a rough guide to the gaming graphics capability of a given GPU, it provides a reasonable steer. With all that house keeping squared away, how do those new M2 chips stack up?

The top M2 chip is the M2 Max, with its 38 GPU cores, up from 32 GPU cores on the old M1 Max. All told, it’s rated at 13.6 TFLOPS. Yup, that’s slightly more than the Xbox Series X. What’s more, the M2 Max has proper bandwidth in and out of that GPU. Its shared memory architecture delivers 400GB/s of total bandwidth for the GPU and CPU.

That’s roughly in the same ballpark as the Xbox Series X, which peaks at 560GB/s for 10GB of its 16GB total memory allocation and 336GB/s for the remaining 6GB.

The biggest M2 Max chip packs 67 billion transistors, not that far off the 76 billion of the beastly Nvidia RTX 4090. (Image credit: Apple)

Perhaps the closest performing PC GPU, in terms of raw TFLOPS, is AMD’s Radeon RX 6700 XT (opens in new tab), which clocks in at 13.2TFOPS backed up by 384GB/s of bandwidth.

On the other hand, those are discrete GPUs and arguably not a fair comparison to what, with the M2 family, are GPUs integrated with CPU and other functions into a full SoC. Perhaps a fairer comparison would be AMD’s latest laptop APU, codenamed Phoenix and announced at CES (opens in new tab)? That sports an RDNA 3-based integrated GPU that achieves 4.3 TFLOPS.

So those new M2 chips do contain some pretty impressive graphics hardware, especially for integrated GPUs, which is broadly comparable with the latest consoles and some decent desktop GPU hardware, too.

Apple’s chips are also looking pretty special when it comes to efficiency. Apple claims up to 22 hours of battery life with the M2 Max fitted to its latest 16-inch MacBook Pro. That may be somewhat optimistic, but even slashed in half that is epic battery life for a laptop with desktop 6700 XT performance. PC gaming laptops don’t even come close.

You’re still left with a fairly pitiful selection of games that are built to run on MacOS and Apple silicon making any discussion of hardware capabilities pretty much moot. Buying an M2 Mac for gaming is a recipe for near total disappointment as a consequence. But, grudgingly, we have to admit there’s some nice graphics grunt in these new M2 chips.