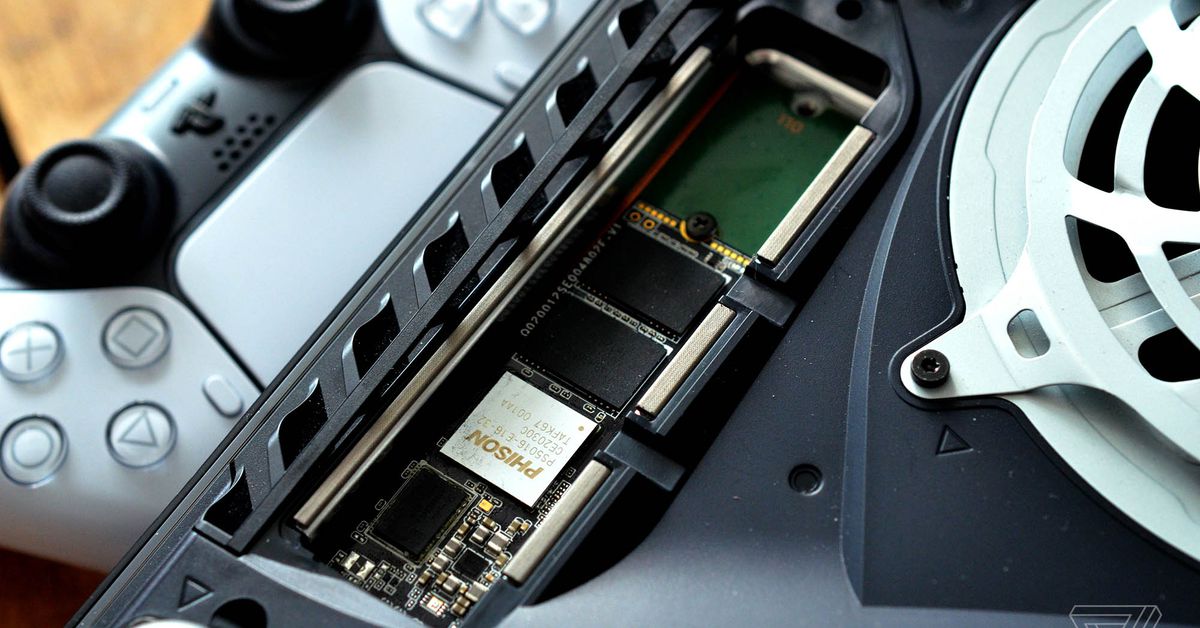 
Sony’s update adding the much-anticipated support for M.2 SSD storage expansion is here, letting you install more PS5 games than the 825GB built-in SSD allows. When the feature first launched in beta, Sony provided a list of requirements, making it clear that you wouldn’t necessarily be able to just grab any SSD and chuck it in your PS5. We’ve tried to list as many of the compatible ones as we can, as stock has seemingly been hit pretty hard — the more options you have, the more likely you are to actually get your hands on one.

Sony’s main requirements are that the SSD is PCIe Gen4 and at least 250GB. However, Sony makes it very clear that your SSD needs a heatsink, which can complicate things, given the limited amount of space in the PS5’s SSD bay. What SSDs you’ll want to consider will depend on whether you want to install a heatsink yourself or not, and whether you’re a “play by the rules” type or a “let’s see what I can get away with” type.

The best no-hassle SSDs: Install them and never think about it again

WD told us that, based on Sony’s requirements, its WD Black SN850 drives (available in 500GB, 1TB, and 2TB capacities) would work, and that it was in the process of testing compatibility. The drive easily surpasses Sony’s speed recommendations, but you’ll want to make sure you’re buying the version with a heatsink — for the 1TB model, the heatsink version costs $20 more than the non-heatsink version and has a big orange line on the front. It’s also the SSD that the PS5’s lead system architect bought for himself.

The WD Black SN850 runs at a blistering 7,000MB/s and can be purchased with a heatsink.

Seagate says its upcoming Firecuda 530 drives, which have the option for an included heatsink, will work in the PS5 as well. When they release at the end of August, it’ll be $160 for a 500GB model, $260 for a 1TB model, and $540 for a 2TB model. You can tell the heatsink models by the orange vertical stripe near the connector.

If you can find one in stock, Gigabyte’s 1TB Aorus Gen4 7000s SSD has a built-in heatsink, and runs at 7,000MB/s. (Note: If you’re willing to spend a ton of money on the 2TB model, you may have better luck finding it.)

A helpful guide to installing an SSD in a PS5.

PS5 heatsinks: For those willing to put in some work and / or roll the dice a little

For an SSD that meets the speed requirements, Crucial told us its newly announced P5 Plus SSD is compatible with the PS5, but you’ll need to install your own heatsink.

Heatsinks should be low profile — for the ones that are just going over the top of the SSD, Sony wants you to add no more than 8mm of height, including the heatsink and thermal interface. Because of that, low-profile heatsinks like the ones below are going to be the way to go.

Comes in 1.5mm or 4mm-thick varieties, both of which fit within Sony’s specifications.

If you’re looking to go all-out on speed but are still okay with installing a heatsink, Samsung’s blazingly fast 980 Pro is another option.

If you’re looking at the 980 Pro, this heatsink from EK Water Blocks is compatible with single-sided SSDs. It also fits within Sony’s height requirements (and looks pretty, though it’ll be buried in your PS5).

This cooler is two pieces, but the manufacturer says it should only be used with single-sided SSDs. Also, it comes in fun colors, not that you’ll ever see it (but please note that price depends on color).

If you’re willing to stick to 1TB of storage, Sabrent’s Rocket 4 Plus is another option. It does come in 2TB and 4TB capacities, but those seem to be double-sided, meaning that heatsinks for them are much more difficult to find. According to Tom’s Hardware, though, the 1TB version is single-sided, making PS5-compatible heatsinks for it readily available.

Comes in 2mm and 4mm-thick variants but has a copper aesthetic to match the Sabrent, if that’s what you’re into.

If you’re looking for something that’s got a built-in heatsink, but you’re willing to roll the dice on speed, Patriot’s Viper Gaming SSD matches Sony’s requirements. However, it falls short of Sony’s recommended speed, though it’s still rated as a Gen4 SSD. There’s also Gigabyte’s Aorus NVMe Gen 4 SSD, which has an official speed rating that’s lower than Sony’s recommendations, though the company says it runs at 5,600MB/s when plugged into a PS5.

The SSD’s heatsink is a fraction of a millimeter thicker than Sony requires, and it isn’t as fast as Sony’s recommended speed. But the company says it’s compatible.

I’m a loose cannon willing to bend the rules to expand my storage.

Some SSDs are double-sided, meaning that they have chips on both the front and back of the PCB. We reached out to StorageIO’s storage analyst and operator Greg Schulz to see if that meant that both sides needed to be covered by a heatsink, and he told us that “the denser the packaging, the more need to remove the heat.” According to him, the heat would have to be dealt with by airflow (which the SSD in the PS5 doesn’t seem to have much access to), or other methods ranging from “heat sinks to small fans to thermo tape among other approaches depending on packaging.”

For that reason, we’re putting the double-sided SSDs without included heatsinks into this category. While there are plenty of heatsinks that are compatible with double-sided SSDs, I struggled to find many that weren’t taller than Sony recommended (though we’ll come back to that note in a bit).

The MC1 non-Pro is one of the few heatsinks that just barely matches Sony’s sizing requirements and supports double-sided SSDs.

If you can’t find a double-sided compatible heatsink that fits with Sony’s specifications, you’d either have to run the SSD with a heatsink on only one side and just hope it doesn’t overheat, or you’d have to try to MacGyver on two ultra-slim heatsinks like the ones below.

So with all those warnings out of the way, here are the SSDs for those who like to live on the edge:

We’ve tested the Sabrent Rocket NVMe ourselves (though without a heatsink). It comes in 500GB, 1TB, and 2TB capacities, and despite the fact that it’s slower than Sony’s recommended speed, it seemed to work just fine. It does appear to be double-sided, though, so the heatsink situation may be sketchy. The same goes for the 2TB and 4TB versions of the faster Rocket 4 Plus.

Our contact at Sabrent told us that he had tested the company’s own heatsink in a PS5 and that it fit — despite the heatsink’s listed height being way outside Sony’s spec (it’s just over double the height). He says that the console can close back up with the heatsink on, and provided pictures, but it’s still going in this category because of how different it is from Sony’s numbers.

Finally, there’s the PNY XLR8 CS3040. It meets all of Sony’s requirements and recommendations, but it also appears to be double-sided. Again, this means your mileage may vary when it comes to heatsinks.

Sony says your SSD has to be at least Gen4 and have at least a 250GB capacity. It also recommends SSDs that run at 5,500MB/s or faster. PCIe Gen3 SSDs aren’t supported (we tried), and neither are SATA ones.

The PS5 is compatible with 2280-type SSDs, which seems to currently be the most widely available size. You can see a list of all the sizes the PS5 supports on Sony’s requirements page.

What are Sony’s heatsink requirements?

It depends on whether the heatsink goes on one side of the SSD or encloses it on both sides, but Sony has diagrams on its requirements page that show the exact measurements that will fit. Basically, though, SSDs with a built-in heatsink, or a double-sided one attached, can be up to 11.25mm tall. If you’re using a single-sided heatsink, you’re limited to one that adds less than 8mm of height. The maximum height not only includes the heatsink, but the thermal pads you use to attach it to your SSD as well.

You’ll also want to make sure your SSD and heatsink are compatible; heatsinks come in the same sizes as SSDs do, and the sizes have to match.

As noted previously, you’ll also want to pay very close attention to whether your SSD is single or double-sided. That can be hard to determine from the product pictures, so you may want to either wait until you actually have your SSD in hand to order your heatsink or take a careful look at the heatsink’s compatibility list (if it has one).

When in doubt, check it out

Sony warns that even a drive matching all of its requirements may still not work. If you don’t want to deal with uncertainty, it’d be best to stick to the SSDs that people have tested and know are good, rather than trying to wander into the Newegg wilderness to find one for yourself.

If you’ve picked up an SSD for your PS5, you can read our install guide here.