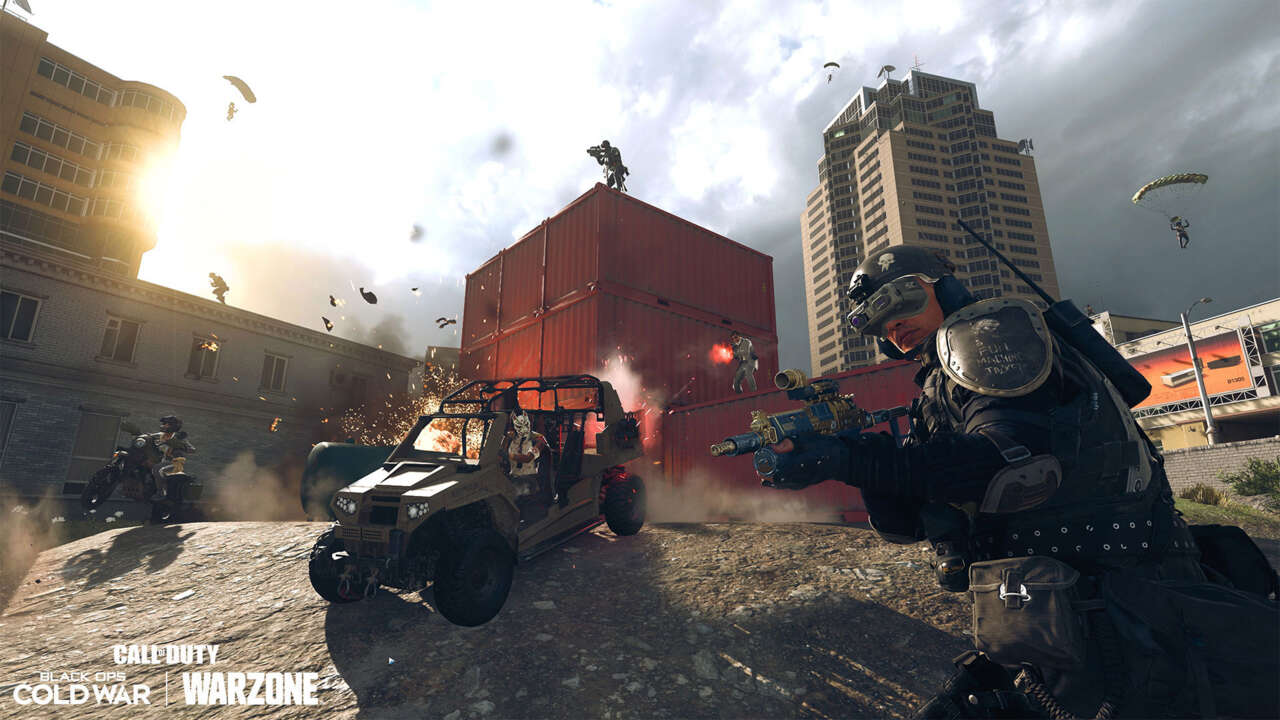 
Call of Duty Season 5 is now live in Warzone, introducing a new 50v50 team deathmatch-style mode, Zombies camos, and some major weapon tuning. Players will likely see a shift in the meta, as many popular guns received a nerf, including the ever-dominant Krig 6.

Clash is Warzone’s new 50v50 team deathmatch-style mode with a twist. Two teams of 50 fight on a much smaller section of Verdansk to eliminate each other for points. Many of Warzone’s features are still active, including contracts, Buy Stations, and loot caches. There are also powerup rewards earned from loot caches and killing opponents that provide game-changing abilities. These range from things like giving players speed boosts to a “hunter” powerup that highlights nearby enemies.

Players have been asking for Cold War’s Zombies camos to be added in Warzone’s gun customization since launch, and Raven Software finally delivered in Season 5 Reloaded. All of the standard Zombies camos are available, but also the popular high-end camos like Plague Diamond and Dark Aether.

Raven Software noted the popularity and performance of Warzone’s long-dominant Krig 6 assault rifle, giving the weapon yet another damage nerf. Nerfs also hit the popular C58 assault rifle, Stoner light machine gun, very powerful OTs 9 submachine gun, and more. While these popular guns were taken down a notch, some of the tactical rifles got a buff to try and make them more viable options. There was also a recoil adjustment made to Warzone’s popular Swiss K31 sniper rifle.

Season 5 Reloaded also makes some adjustments to weapon attachments, including grips and barrels for select weapons. Several barrels received a decrease in recoil control for assault rifle and light machine gun classes. Only time will tell how much these changes impact the meta, but we’ll be updating our recommended Warzone loadouts with any upcoming shift.

The mysterious Mobile Broadcast Stations added at the start of Season 5 have been highlighted for the update. The patch notes state: “It is suspected that they will soon begin amplifying the ‘Dragovich Program’ tapes – A.K.A. the Numbers broadcasts – across the region.” At this time, the stations appear to remain dormant, but hopefully they’ll start activating soon.

Warzone is set to receive The Numbers event later this month, which revolves around the Black Ops campaign narrative of brainwashing with a numbers broadcast.

The full patch notes can be found below, as shared by Raven Software.

Season 5 Reloaded also arrives to Call of Duty as as Activision Blizzard faces a lawsuit from the state of California over harassment and discrimination against women.

Those brave enough to investigate the Mobile Broadcast Stations scattered across Verdansk will receive the following incentives:

This is Team Deathmatch on an epic scale: 50 v 50, all your loadouts accessible, Ping and Armor System, Cash, Buy Stations, and Vehicles from both the regular Battle Royale and Plunder modes.

The rules have changed.

Last week, we gave you a first look at some of the fundamental changes coming to Verdansk via this new Mode:

And as mentioned, those who place first will receive the exclusive Calling Card!

The previously dormant Mobile Broadcast Stations seem to be stirring. It is suspected that they will soon begin amplifying the “Dragovich Program” tapes – A.K.A. the Numbers broadcasts – across the region.

We’ve received reports of new, unusual activity in the Red Door rooms. Operators have been asked to investigate.

Loot that spawns across Verdansk has been adjusted as follows…

While assessing the power level of BOCW Weapons, we have observed some disparities between ease of use and efficacy. The Krig 6 (BOCW) has shown an impressive performance at just about every engagement range. While we believe it is important to have a wide array of Weapons which can be utilized by players of all skill levels — it is critical to the health of the game that their effectiveness scales appropriately with the skill required to wield them. If players can be as effective with a Weapon that is pinpoint accurate that has a marginally slower Time to Kill potential than the hardest to wield Weapons, why would they choose another? As we continue to address these Weapons, we will also be making adjustments to BOCW attachments that offer Recoil Control. We feel these changes will provide a fairer, more diverse long-range landscape.

High damage Weapons like the C58 (BOCW) tend to adhere to a lower Rate of Fire and higher Recoil, which generally balances out their hasty Time to Kill potential. Much like the Krig 6 (BOCW), the C58 (BOCW) was a tad easier to control than we feel is appropriate for a Weapon with its damage profile. While “Recoil adjusted” can be rather nebulous, the exact details of these changes can often be difficult to quantify with numbers alone. While the C58’s (BOCW) Recoil has been increased slightly, the majority of this change will be felt in the Recoil Pattern deviation. When this deviation is increased, it can create subtle shifts which become increasingly difficult to compensate for given distance from the target.

The EM2 (BOCW) is not receiving a direct reduction to its efficacy with this change. However, it will result in the Base Optic being a less suitable substitute for higher magnification optics. This, however, in conjunction with the changes to Recoil Control barrels will make the EM2 a slightly less viable option to lesser skilled marksmen.

To the dismay or surprise of some, our data suggests that the Assault Rifle Bravo (MW) is an absolute monster. The Assault Rifle Bravo (MW) will still be capable of achieving an extremely low Time to Kill, though that speed will now be locked behind an additional Headshot. Changes like these align more closely with our goal to shift consistently acquirable TTKs out of the 300ms range.

The Groza (BOCW) has not yet fulfilled the role we had intended for it. As a more ‘bruiser’ oriented, AR-SMG hybrid, its slow base Sprint to Fire Speed has continued to hold it back considerably. With this change, it will be able to more reliably contest SMGs in short-range engagements.

The Light Machine Gun Alpha (BOCW) had already been an incredibly accurate LMG prior to the changes which added Recoil Control to the Task Force and Match Grade barrels. With a baseline increase to Recoil and a reduction in the total amount of Recoil Control the aforementioned barrels offer, it will be harder to stay on target with Light Machine Gun Alpha (BOCW) at longer ranges.

Of the Tactical Rifles adjusted in this patch, the M16 received the smallest change. This is partly because we feel the M16 (BOCW) is already in an acceptable spot for Burst Weapons.

The Type 63 (BOCW) has become quite infamous recently — and for good reason. With a single Headshot, Time to Kill could be reduced to 332ms and with two, a mind boggling 166ms. A speed which only Sniper Rifles could compete with a TTK of 0 (only the travel time of the bullet). This should put into perspective how out of line the Type 63 (BOCW) was. While these changes seem extreme, a TTK of 332ms is still possible, it will just require three headshots instead of one.

This Maximum Damage change mirrors the adjustment to the base Submachine Gun Charlie (MW) made earlier this season.

The OTs 9 (BOCW) might be a bit stronger than we would like, but we would first like to see how this change broadly impacts the Weapon’s viability. The OTs 9 (BOCW) was always intended to be the quintessence of barrel stuffing Submachine Guns. A Submachine Gun that was intended to challenge Shotguns within their Effective Damage Range. We believe it is achieving that, but its Maximum Damage range, while shorter than each other BOCW SMG, might still be too long. We will continue to closely monitor the performance of the OTs 9 (BOCW) following this change.

While firing the PPSh-41 (BOCW), the Weapon could kick in a manner that would make it difficult to gauge bullet directionality. This is a subtle change that will have a significant impact on the ability to reliably line up shots.

We have improved the firing Recoil behavior for the Swiss K31 (BOCW). We expect this change to go largely unnoticed as it does not have a measurable impact on the Weapon’s effectiveness but should improve its overall feel.

Much like the Swiss K31 (BOCW), the ZRG 20mm (BOCW) has received some changes to its firing Recoil behavior to ensure that it looks, sounds, and most importantly feels like one of the baddest Sniper Rifles in Verdansk.

As we settle on the proper magnitude of Recoil Control for these barrels, we expect this to impact individual Weapons differently. Weapons that more heavily rely on the Recoil Control they received from these barrels may need to be addressed independently to ensure they align with our Weapon mastery goals.

With the aforementioned changes to the DMR 14 (BOCW), we felt it was necessary to make an adjustment to one of the most powerful attachment stats.

To ensure the Groza (BOCW) does not cross too far into Submachine Gun territory following the increase to its Sprint to Fire Speed and given its already SMG-like ADS Speeds, we are reducing the effectiveness of its Serpent Grip.

Rampart crashes a giant tank into Apex Legends next week