“Where the fabs are is more important.” 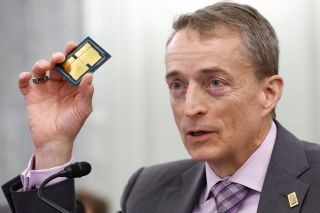 Computer chips are more important than oil and gas. So says none other than Pat Gelsinger, Intel’s CEO. Speaking to CNN while attending the World Economic Forum in Davos, Gelsinger explained why computer chips are the defining technology of our time.

“Geopolitics has been defined by where the oil reserves are for the last five decades. For the next several decades, where the fabs are is more important,” Gelsinger says (opens in new tab), “because every aspect of human existence is becoming more digital. Everything digital runs on semiconductors.”

Yup, those fun little chips in your PC are the new geopolitical battleground.

He also emphasised how supply chain issues during the pandemic and following Russia’s invasion of Ukraine have been a huge wakeup call and demanded immediate action. “We need to go from ‘just in time’ to ‘just in case’. We need resilience,” he reckons.

The most pressing problem, at least from the perspective of Western powers, is the current imbalance in chip production, with Asia and Taiwan in particular dominating the market. Both the US and EU are attempting to address that with new policy and investment initiatives. But just how “bad” is the chip supply imbalance and how soon can it be rectified?

Gelsinger recently said that the US and EU combined could match Asia’s output within 10 years. Currently, the US and EU account for 20% of global chip production with China, Japan, South Korea, and Taiwan hoovering up the remaining 80% (opens in new tab).

Much of that shift will actually be delivered by Asian companies opening chip factories in the US and EU, such as TSMC’s new fab in Arizona. Samsung and SK Hynix are also expanding their production capacity in the US.

In the EU, the European Commission is aiming to double its share of global capacity from 10% today to 20% by 2030.

However, just as the US and EU are planning on dramatically improving their chip production resources, so is Japan. According to Digitimes, Japan is planning to advance their domestic fab capacity from its current 40nm technology to 2nm by 2027.

The impact on all this on PC gaming is arguably pretty small beer. But, if anything, it should help ensure that gaming hardware keeps on improving. The current state of affairs with, for instance, GPU progress acutely dependent on a single company in Taiwan—TSMC—feels extremely precarious.

If cutting-edge chips were being knocked out in the US and the EU, too, not only would supply be more certain, but market competition would be healthier and prices might be a bit more palatable, too. Here’s hoping.