Tron: Ares is currently in early talks, but it’s not the only Tron thing happening this year. 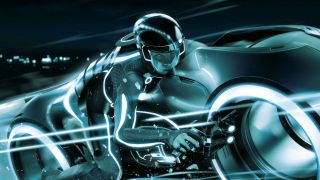 Tron, a series about people who wear electronic pyjamas and ride motorcycles that is cursed to spring back to life once every decade or so, is returning once again.

Deadline reports (opens in new tab) that Disney is in early talks with Joachim Rønning to direct Tron: Ares, the third entry in the film series that will apparently, god help us, star Jared Leto. The film is notable as the first entry in a film series that’s been dormant for over a decade, and for being the first time I’ve written an article like this and not had to mention Amazon (opens in new tab) being somehow involved.

The notion of a Leto-led Tron film has been circulating since at least 2017, when The Hollywood Reporter (opens in new tab) originally broke the news that Disney was looking into the possibility. But those plans apparently went on ice not long after, and have only now been put back on the table.

If the director’s name doesn’t mean much to you, Rønning is the guy who directed Maleficent: Mistress of Evil and co-directed the last Pirates of the Caribbean movie, making him a Disney veteran at this point. The new Tron is set to be a sequel to 2010’s Tron: Legacy, a less-than-great movie which was nevertheless infinitely better than its dire tie-in game (opens in new tab).

Other details are light on the ground right now, which is only to be expected from a film this early in negotiations. We do know the script was done by Jesse Wigutow, but I’d be lying if I told you that meant anything to me at all. According to IMDb (opens in new tab), Wigutow’s other work consists of two shorts and a couple of films between 1999 and 2015. Relevant to PC gamers, though, he is writing an upcoming Thomas the Tank Engine film (opens in new tab), so Tron: Ares is probably gonna be amazing.

It seems Tron is actually set for a bit of a revival this year. Not only is Disney prepping this film, but we’re also getting a visual novel set in the Tron-iverse (opens in new tab) from Bithell Games, maker of Thomas Was Alone and John Wick Hex. It’s not exactly an extravagant festival of Tron, but you get the feeling that someone at Disney has realised they’ve let a potentially-successful franchise lie dormant for over 10 years, and now they’re trying to feel out public sentiment to see if it’s worth pulling it out of retirement.