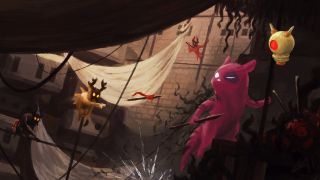 The humble Slugcat—the adorably squishy critter at the heart of Rain World—has long been one of my white whales. I’ve tried (and failed) to master the art of survival in the Slugcat’s uncompromising world several times since 2017. With the release of Downpour, it finally clicked. On top of being a titanic extension for the thorny survival-sim platformer, the Downpour expansion, after five years in development, goes a long way to making the original game more accessible and less intimidating—before unleashing a sequel’s worth of fresh horrors upon me and overwhelming me all over again.

Rain World was the very definition of a cult hit. Originally met with critical confusion (our own Shaun Prescott’s review being one of the few truly positive ones), it’s easy to see why many bounced off it. Rain World is an ornery, uncommunicative beast. Between constant time pressure (a race against flesh-pulverizing rain storms) and unpredictable, untethered AI, many players attracted by cute alien animals were left cold, wet, miserable and confused.

Rain World is a game of often striking beauty, with detailed pixel art backdrops populated by procedurally animated, physics-driven critters. It feels like a living alien world with a complex ecosystem. Unfortunately for the player-controlled Slugcat, this is nature without restraint, red in tooth and claw and rich in ways to die. It’s a truly daunting game, but a mesmerizing one to inhabit, and the promise of discovering another strange new environment (full of new ways to be fangoriously devoured) and unraveling a little more of the story led some brave souls to fight on. Those who did found a game that stuck with them for years.

And so Rain World found its audience at the intersection of nature documentary fans and those who play STALKER survival mods. While many tapped out before discovering Rain World even has a story and dialogue, those who persisted found a game of amazing depth. Rain World has shockingly complex AI (with every creature having complex drives and reactions), hidden systems like creature taming, intensely technical movement despite simple controls, and a morally messy story revolving around karma and cycles of death and rebirth.

A single playthrough could easily last dozens of hours, and thanks to the game’s unpredictable web of systems, no two adventures were quite the same. It felt almost boundless. Almost.

For some it still wasn’t enough. The deep well of lore ran dry, landscapes became overly familiar, and creatures that were once terrifying and majestic became predictable. Wanting more, fans picked Rain World apart, produced mod tools and set to work expanding it. More playable creatures, more environments, more art and music. Many drew fanart and wrote extensive fiction, building on its story of alien transcendence. Downpour is the result of those efforts.

While many mods have been released in the past five years (most found on community hub RainDB), most eagerly awaited was the humbly titled More Slugcats, which started as an attempt to add several new playable critters with interesting abilities but ballooned in scope. Now the work of nearly 40 modders, it’s the central pillar of Downpour. This collaboration was organized by original developer Videocult, reinvigorated after reclaiming Rain World’s rights from original publisher Adult Swim.

Laying the groundwork for Downpour is Rain World Remix, a free upgrade to the original game by More Slugcats’ two lead coders, launching alongside the paid DLC. By default, it rebalances Rain World to be easier to understand (through additional info, tips and tutorials) and a bit less randomly cruel, but it’s fully customizable. Get your feet wet and there’s a dizzying array of buttons, toggles and variables to tune the game to your tastes, plus accessibility options like the ability to slow the entire game down ala Celeste.

Getting into Rain World is far less intimidating now than at launch. There’s still much to learn, but there’s a fully spoiler-tagged wiki with useful technical guides if needed. The original game now serves as a warm-up for Downpour, which is split into three modules—More Slugcats, Expedition and Jolly Co-op.

Wading into the deep end

More Slugcats could easily pass for a full sequel, adding five new characters with wildly different abilities and five linked stories spanning generations. While you can forcibly unlock this stuff early, Downpour recommends completing the original story first. More Slugcats triples the world’s scale, expanding old zones and adding new environments with their own ecologies, creatures, aesthetics and music. More Slugcats also adds a Challenge mode with 70 short score-chasing levels (great for practicing combat and evasion) and a Safari mode that lets you freely observe the world from a distance, or possess any living creature for a taste of what life is like as a Squidcada or Miros Bird.

The additional Slugcats and their strange powers change the game more than I expected. Five high-powered mutants never considered for mass production: Too weird to live, and too rare to die:

The rotund Gourmand needs extra food to survive, but the calories go to its brain, letting it combine items into new equipment and cook up more nutritious meals. It can also throw its weight around in combat, diving onto enemies to damage and stun.

The Artificer is violence incarnate. Immune to blast damage, able to craft bombs and organically rocket-jump through the air. Unfortunately, it starts out in a ruined city full of surly neighbors unhappy at sharing their turf with a living explosion. The Rivulet has few downsides; it’s faster and more agile than average and nearly as good in water as on land, although not truly amphibious. Its main quest is a race against time as rainfall becomes more frequent with each hibernation.

The Spearmaster is a bizarre vampiric mutation with no mouth. To feed, it grows spear-tipped tentacles from its tail to impale and drain life from prey. These endless bone-spears can also be thrown into walls and climbed on, giving it impressive mobility, but it must hunt live prey to survive. Unlocked last is the Saint. Its grappling-hook tongue makes it the most agile of all (plus it’s fun to use), but it’s also frail, half blind and so weak-of-limb that thrown spears just tumble harmlessly to the ground. It also starts out starving and freezing to death, so… good luck?

All eight Slugcats are playable in Expedition, a semi-roguelike survival sandbox that lets you live the Slugcat life without worrying about plot. On top of basic survival, this mode assigns both random and hand-crafted missions, rewarding success with points to spend on perks, score-multiplying difficulty boosts and other goodies for future runs. Judging by Steam reviews, some players have clocked hundreds of hours in vanilla Rain World. I can see them crossing into four-digit obsession here.

The final part of the package is Jolly Co-op, turning story and expedition modes into a local multiplayer romp for up to four. While true online multiplayer isn’t in (though with future mods, who knows?), Rain World does support Steam Remote Play Together, making distance less of an obstacle. With all characters unlocked, it completely transforms the game once more. One Slugcat is easy prey. Four are a squishy, noodly nightmare.

Downpour is a monstrously huge package and a new beginning for Rain World. Now with built-in mod support, Steam Workshop integration and better tools in circulation, the fans who kept Rain World going all these years have a shiny new foundation to build on and plenty of fresh blood to join them. Even after playing a dozen hours I feel I’ve barely explored Downpour’s shallows, but come on in; the water’s fine, and only a little noodly.