343 took a hit in Microsoft’s massive wave of layoffs. 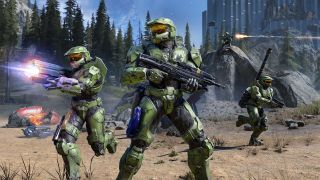 The same day Microsoft announced it would be laying off 10,000 workers (opens in new tab), including employees at game studios Bethesda and 343 Industries, a former senior multiplayer designer on Halo Infinite, Patrick Wren (opens in new tab), had harsh words for 343 management’s direction for the game.

“The layoffs shouldn’t have happened and Halo Infinite should be in a better state,” Wren wrote on Twitter. “The reason for both of those things is incompetent leadership up top during Halo Infinite development causing massive stress on those working hard to make Halo the best it can be.”

It’s clear that the wide sweep of Microsoft layoffs can’t be laid at 343’s feet, but Wren seems to argue that the studio could have spared or at least mitigated the effect this downsizing had on its own team. Halo Infinite has had a strange arc, with its initial reveal met with skepticism, mocking memes, and a year delay. Infinite had a bit of a redemption when it launched in fall 2021, with a decently-reviewed campaign and a warm reception to its free-to-play multiplayer.

Wren and a contractor who worked on Halo Infinite, Nicholas Bird (opens in new tab), both criticized how 343 deployed contract labor in development. “I would have loved to stay on the team if I could have and worked my way up,” Bird wrote in response to Wren, lamenting the Microsoft-imposed time caps on contract workers. “So many amazing people and talent that just disappeared,” Wren agreed.

The layoffs at 343 shouldn’t have happened and Halo Infinite should be in a better state. The reason for both of those things is incompetent leadership up top during Halo Infinite development causing massive stress on those working hard to make Halo the best it can be.January 19, 2023

Bloomberg reporter Jason Schreier wrote on the subject of Microsoft contractors back in 2020. “At Microsoft, contractors can only work for 18 months max (they can come back after a six-month break),” Schreier tweeted (opens in new tab) at the time. “Microsoft uses so many contractors that this limit leads to a lot of attrition⁠—and for games that take four plus years to make, like Halo Infinite, it has been disruptive.”

Wren did have a more positive take on the leadership of Infinite’s multiplayer team, writing “I do want to make sure that I call out how amazing the multiplayer team was during development.”

It’s surprising and uncommon for a developer still active in the industry to speak so openly and critically about a former employer, but to my eye this speaks to how deeply-felt his dissatisfaction with 343’s leadership during Infinite’s development is.

343’s lack of preparedness for launching a live service game after a full year’s delay has been puzzling from the outside, and dismaying for players who were initially excited by the excellent foundation set with its multiplayer. I can only imagine the frustration from those within the studio as layoffs sweep through one of the wealthiest companies on the planet.