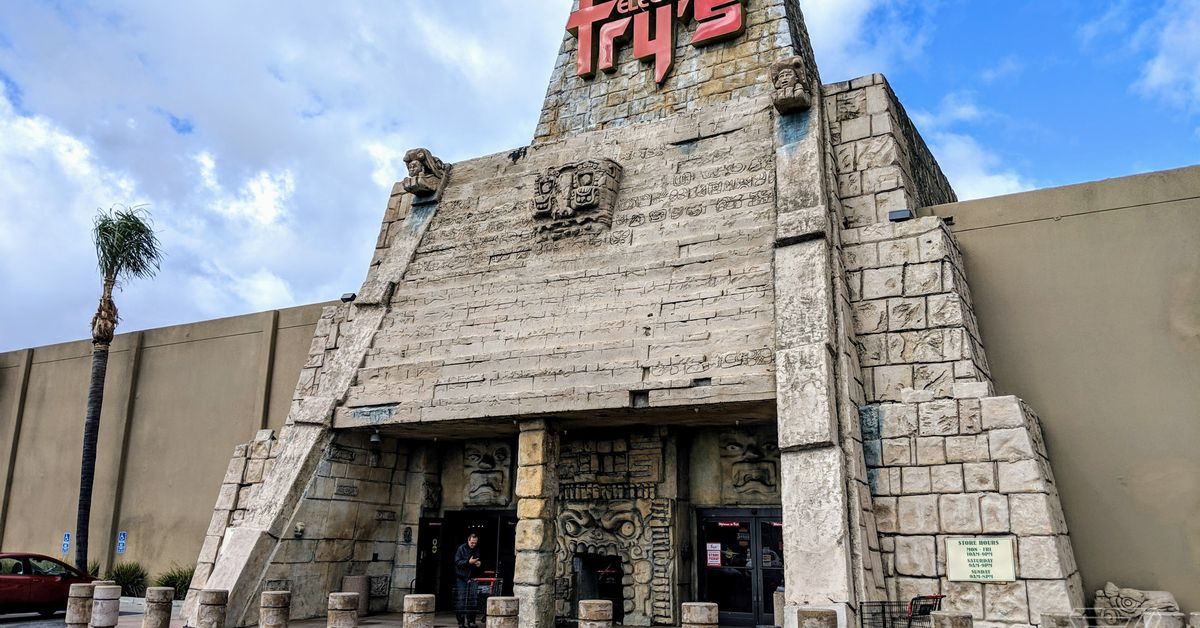 Fry’s Electronics is shutting its doors for good


Fry’s Electronics, one of the last big brick-and-mortar electronics store chains in the United States — and a Silicon Valley institution in particular — is permanently closing nationwide, local broadcaster KRON4 has confirmed, following a report from Bill Reynolds and another from Matthew Keys.

The company’s Facebook page is also gone and its Twitter feed has been set to private — it was public earlier this evening, though it hadn’t tweeted in quite some time.

If you’ve ever visited a Fry’s anytime in the past two to three years, none of this will come as a surprise.

Even before the COVID-19 pandemic, the family-owned business had been pushed to the brink of extinction by online retailers like Amazon, Newegg and more. Initially, the company started a campaign to price-match any item you could find online. It added a children’s toy aisle, huge racks of As Seen on TV gadgets, even perfume. But things got worse. By 2019, what used to be a paradise of gadgets, computers, components, video games, audio equipment and appliances had turned into ghost warehouses filled with empty shelves.

It turned out the company had been forced to switch to a consignment model, only able to attract suppliers willing to get paid for their goods after Fry’s managed to sell them. Many suppliers weren’t.

YouTuber star Bitwit famously conducted a video investigation that showed the depths the once-great stores had sunk to — and how the company shipped extra inventory to its Las Vegas store just in case journalists stopped by during CES 2020.

Soon, the company began closing its stores — and not just any stores, but major ones in the heart of Silicon Valley, like its cowboy-themed store in Palo Alto mere steps away from where my dad used to work on the Danger Hiptop (known better as the T-Mobile Sidekick) and many big tech startups still do business. That Palo Alto store closed in December 2019. I used to ride my bike to the company’s Egyptian-themed, pyramid shaped store in Campbell, which abruptly closed last November.

Egyptians? Cowboys? Yes, setting foot into a Fry’s Electronics was an Experience with a capitol “E” — when I moved to the Bay Area in 1990, one of the very first stores was laid out like the insides of a (now-vintage) computer — you’d walk down the aisles of the motherboard, bumping into giant human-sized capacitors and resistors as you’d go. The Egyptian store had fake columns, mummies and sarcopaghi; laptops were laid out on huge stone slabs held up by statues of black panthers. That Palo Alto store which closed? Fake horses and hot air balloons hanging from the ceiling. Here are a few of the other locations:

“Going to a Fry’s store is entertainment in itself; for a geek, it could be recuperative,” wrote former Apple exec Jean-Louis Gassée in a 2019 blog post. I wholeheartedly agree — I’d even occasionally grab some food, either a packet of discount astronaut ice cream or one of the many, many selections from their tremendous candy shelves attached to the candy line. They’d even do hot dogs and soda some summers when I was growing up. The company’s Black Friday doorbusters were a Silicon Valley event, too, with lines around the block for $200 laptops or a $60 router.

There was the little matter of Fry’s famously bad customer service, though. Rare was the day I’d find an employee who knew anything about their products, checkout lines were long, returns were incredibly slow, and the company was well-known for taking product returns, slapping on a discount label, and sticking them right back on the shelf. They’d also try to check every item against your receipt as you left, something that (unlike Costco, where you sign a member’s agreement) you didn’t need to let them do.

(I can’t figure out where to fit it, but there was also the amusing incident where a Ferrari-driving VP was found to have embezzled $65 million.)

The writing has been on the wall for Fry’s since last April, I would say, when reports surfaced that its San Jose store might be replaced with an office campus — reports that often neglected to mention that Fry’s corporate headquarters also occupied the same address.

For a lot of readers, I bet this news is more of a nostalgia trigger than a real loss. But for me, it feels like we’re at the end of the era of gadget stores, now that the one I grew up with is gone. Over the years, we’ve lost Radio Shack, Toys R Us, The Sharper Image and Brookstone, the Bose stores, and the Microsoft Stores. In the Silicon Valley many smaller chains like CompUSA and Micro Center, and stores like Halted (known for actual circuits, not computers) and WeirdStuff Warehouse (a wild experience itself!) have long since closed their physical doors as well. Some of the bigger ones have become zombie brands, but they’re effectively gone. (Micro Center still has stores outside the Bay Area.)

I’m trying to think of any Silicon Valley electronics stores left, save Central Computer and of course Apple and Best Buy. If you think of any, let me know in the comments below? I might like to visit while that’s still an option.

Roblox Has Finally Set A Date To Go Public

The studio that made sci-fi shooter Disintegration is...