Not even Squad is immune to monetization, it turns out. 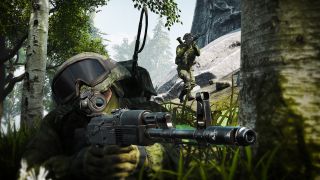 Longtime players of the milsim FPS Squad were blindsided yesterday when developer Offworld Industries announced (opens in new tab) that the game once promised to never sell paid DLC will, in fact, start selling paid DLC in its next update. Offworld is starting small with two packs of paid emotes accompanying one set of free emotes that all players will receive automatically.

“Emotes are animations which you can use to express yourself, interact with each other, celebrate in-game situations, or brighten up down time. We hope they will enhance the social and cinematic aspects of your Squad experience,” says the announcement post.

Offworld says the first batch of emotes is the beginning of a new form of support for Squad that it’s “excited to try,” but to some players, Squad’s foray into microtransactions feels like a betrayal. It’s certainly taking me by surprise as a fan—I’ve celebrated (opens in new tab) Offworld’s determination to keep Squad a one-time purchase multiple times on this website, but times are changing.

“If it becomes a cash grab then I have got my $60 out of the game,” commented FDM_01 (opens in new tab) on the current top post of Squad’s official subreddit. “I will retire it right beside BF2.”

To its credit, Offworld addressed the unexpected policy change directly in its communication, saying in no uncertain terms that, contrary to old promises, Squad needs new sources of revenue to stay healthy.

“We understand that paid content in gaming can be controversial and that previous leadership at Offworld had stated that paid DLC would never be added to Squad. Given this we wanted to inform you of this change prior to the release of v4.2 early,” the post reads.

I like playing Squad and the devs need funding.

“As we look into the future we see a long and healthy life for Squad. It has a large and dedicated playerbase. We have plans for more updates and to support the game beyond 2023. While many of these planned updates will be free, we also realize that we need a way to continue to fund the development of Squad. Paid content like Emotes is one such way to help fund that development and continue our work on improving the game.”

Squad’s subreddit is abuzz with reactions to the emotes announcement. Some are understandably peeved, as evidenced by one top-upvoted post by user Sullixio (opens in new tab): “DO NOT BUY EMOTES!!!” Others are receptive to Offworld’s reasons for the policy change.

“I like playing Squad and the devs need funding,” wrote 92nose (opens in new tab).

“I’m buying emotes because I want to support the devs. It’s a small studio and they’ve been releasing free updates with great new content for years. They deserve to make money for their efforts, and there’s nothing unethical about adding purchases that are purely cosmetic and won’t affect gameplay,” added jmac1066 (opens in new tab).

For some players, their beef isn’t with the decision to have microtransactions, but the possible slippery slope that they represent. Sure it’s just emotes right now, the argument goes, but how long until Squad’s clean, realistic military aesthetic is painted over by gaudy soldier skins (opens in new tab), Santa hats, and immersion-shattering media crossovers?

“Don’t forget the LED spinners on the wheels and neon purple tracers for the M2. Only $4.99 for 50 Chevrons, first-time buyer deal,” commented Which-Forever-1873 (opens in new tab).

If it becomes a cash grab then I have got my $60 out of the game. I will retire it right beside BF2.

There is no immediate sign that Offworld wants or plans to go Full Fortnite, but I can’t help but share in this particular cynicism. I watched firsthand as Rainbow Six Siege, a military FPS that once had a unified style of tacticool anti-terrorist operators, descended into tacky hell with grotesque Rick and Morty (opens in new tab), Nier Automata, and most recently WWE crossover skins. I wish that I had sounded the alarm years ago when Ubisoft gave one operator a goofy pizza helmet, but instead I told myself that it was just one silly skin, and bought it.

It’s true that since its early access release in 2015, Squad has stood out as a well-supported FPS with zero microtransactions. Last year alone, free updates added a new faction, weapons, maps, and amphibious vehicles (opens in new tab). Its only major price increase happened when it released out of early access in 2020, moving from $40 to $50. I understand why Squad’s old model could become unsustainable—milsims are inherently a niche genre and there is, at some point, a limit to how many new people want to buy the game. In an environment where $30-$70 skin bundles sold on top of $10 battle passes are increasingly the norm, it’s impressive that a reasonably popular FPS like Squad has held out this long.

That said, there is one comment in Offworld’s emotes Q&A that’s giving me pause:

“Will you start charging for maps or factions in the future?

Our approach to the future of Squad is to keep it as inclusive as we possibly can. Creating maps and factions takes a lot of time and effort and we wish for our entire community to be able to enjoy the fruits of our hard work.”