He’s got some hidden functionality under that innocent, chrome exterior, as it turns out. 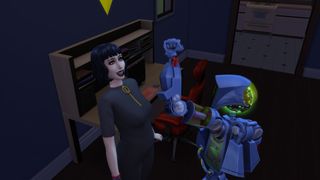 Great moments in PC gaming are bite-sized celebrations of some of our favorite gaming memories.

In The Sims 4, as in reality, finding the time between working your way up the corporate ladder and running a household is hard. It’s particularly hard when you mix in the twin timesinks of laundry and hoovering. Why anyone would play with these features turned on I know not, but if you’ve ever tried it you’ll undoubtedly understand the need to nab yourself a sim butler ASAP.

I was playing the Discover University DLC. I’d just made my way through the backbreaking educational system, onto a middling rung of a tech job. I had a bit of extra cash, so I hired myself a butler to take care of the family stuff while I pursued some fun hobbies. Now for a life of luxury, I thought.

However, having witnessed the butler putting the toddler in his highchair, then taking him out, then putting him back in 17 times in a row, I now hold that butlers in The Sims 4 are about as useful to me as a left-handed screwdriver. They’re also expensive. So I decided to pursue another kind of help. The kind that I could create for myself—cue mad scientist laughter.

The Sims 4 Discover University pack gives you the option to build a robot called Servo, which I thought was a fantastic idea—a fully programmable friend to help me around the house, a controllable character in fact, with emotions and needs just like those of your sims. The perfect AI friend that definitely couldn’t go wrong, ever.

The first step was to build my robotics skill to level eight, which took the best part of what felt like a decade in human years. The trick to expedite the process is to get on with making Mechanisms (x18) and Computer Chips (x12) once you hit level two, so you can use them later down the line to build your Servo. These cost three Robot Parts each, which you can buy from the computer under “Buy upgrade parts.”

Then came a mindless clicking fiasco as I loaded my online cart up with Plumbing Upgrade Parts and the rest of the components, with no way to enter the order manually:

All that strain on my clicking finger was worth it when Servo finally whirred to life, greeting me with an upbeat trill and a twirl of his shiny torso.

And if you were thinking the “AI friend that couldn’t go wrong” segment earlier was a Chekhov’s gun you’d be right. What I didn’t realise when creating Servo was that not only can he flirt with the electronics around your sim’s home, he can also give your sim a baby.

Yep, turns out you can woohoo with Servo, and the baby does come out human… So that’s what those Plumbing Upgrade Parts were for.