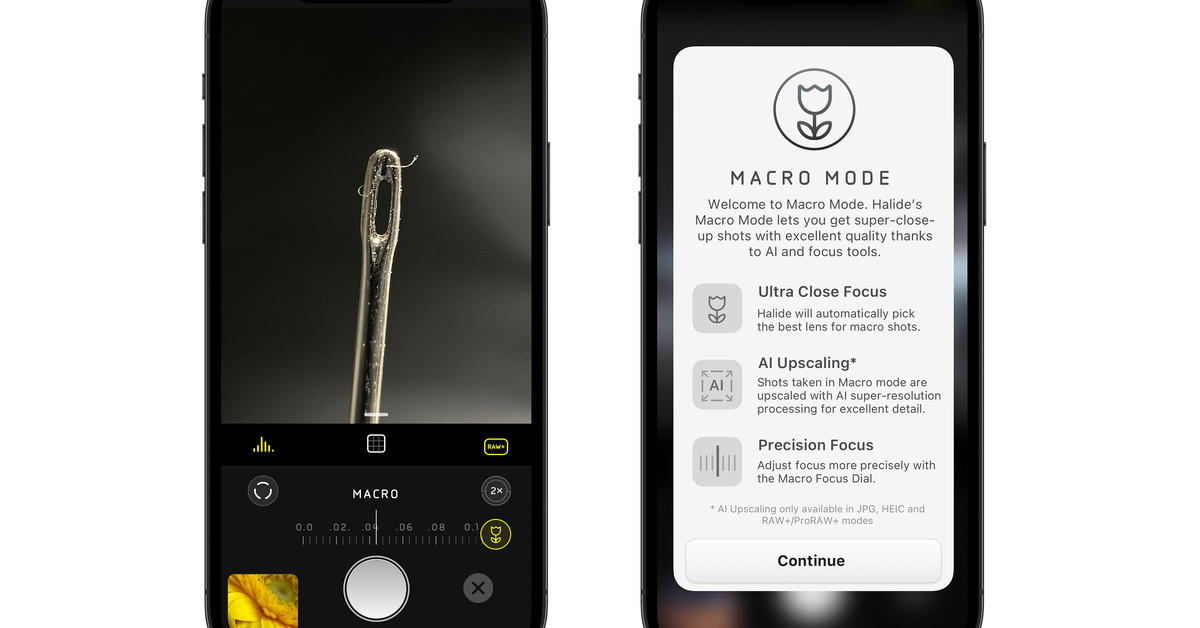 
Halide is one of the best photography apps on the iPhone, and the company has just updated its app with a new macro feature, designed to perfectly complement the new macro mode that Apple added with this year’s iPhone 13 Pro models.

But Halide’s 2.5 update doesn’t just add support for the iPhone 13 Pro’s existing macro feature that Apple made. It takes things a step further and adds a macro mode for older iPhones, too, using Apple’s Neural Engine for “AI-based detail enhancement,” which uses a neural network to squeeze extra detail out of the close-up shot, even when you crop in.

Close up pictures taken using Halide 2.5 on regular mode (left) and the new macro mode (right) on an iPhone 12 Pro.

The “official” macro mode on the iPhone 13 Pro and 13 Pro Max uses the new ultra-wide lens that Apple offers on its more premium models, which — unlike the ultra-wide on the regular iPhone 13 models or older iPhones — add an auto-focus mode that makes the ultra-close up photography possible.

Halide is mimicking that effect in two ways: first, it determines what camera lens on your device can focus the closest, and then the app offers “sub-millimeter” focus control to get the perfect shot. Then, it uses the aforementioned “Neural Macro” feature to upscale the image, allowing for sharp photos even when cropped in by 2x or 3x.

It’s not quite as good as the iPhone 13 Pro, but it’s a fun tool to try

To use Macro Mode in Halide, you’ll first need to update your version of the app to Halide 2.5 from the App Store. Then, tap the “AF” button to toggle off autofocus, which brings up the manual focus menu, where you’ll be able to tap a new flower icon to enable Macro Mode.

I was able to briefly test out a beta of the new update on my iPhone 12 Pro, and the results are pretty impressive. It’s still not quite on the level of the iPhone 13 Pro’s macro capabilities — there are still limits to what the older hardware is physically capable of doing — but it’s certainly a better solution than simply holding your phone close to your subject and hoping for the best and a fun tool to play around with. And while I don’t have an iPhone 13 Pro handy to test with further, Halide says that its Macro Mode enhances that feature for even better macro shots, too.

The new Macro Mode addition works on any iPhone that offers Apple’s Neural Engine (which includes the iPhone 8 and all subsequent releases) and is a free update for Halide owners. Halide itself can be downloaded for free from the App Store with a seven-day free trial and can be purchased for either $2.99 per month or $11.99 per year subscriptions or a flat $ 49.99-lifetime price upfront.