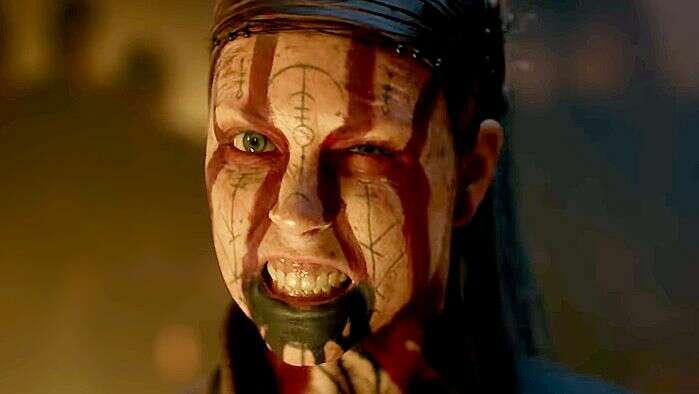 Senua’s Saga: Hellblade II developer Ninja Theory has revealed that not all solutions in game development are high-tech. A video that the developer posted on Twitter showed how the game’s lead actress, Melina Juergens, sometimes uses unexpected objects to help her with her motion capture for the game.

In the video, Chris Wilson, Ninja Theory’s expert look developer, is seen capturing high-resolution shots of Juergens’s eyes. Presumably, these shots will be used in the game, perhaps during scenes that have close-ups of Senua. In order to achieve these still shots of Juergens’s eyes, Wilson created a household contraption that she rested her chin on, consisting of a stand, a frame to center the shot, and a toilet plunger.

The outside frame is made out of wood, while the top part looks to be some sort of taped headrest for Juergens’s forehead. The plunger, where Juergens rests her chin, provides stability so Wilson’s camera can take accurate shots.

Or the whole thing could just be an impromptu eye exam and has nothing to do with the game at all! Juergens has been going under intense warrior training in order to portray a more realistic Senua for the sequel. We don’t know much about the game, but so far it’s been confirmed that it will take place in Iceland and will be utilizing Unreal Engine 5.

Senua’s Saga: Hellblade II was revealed back in December 2019, and is set to launch on Xbox Series X|S and PC. Ninja Theory also showed some behind-the-scenes footage of the game at the Xbox Games Showcase back in June. A release date hasn’t been announced yet.