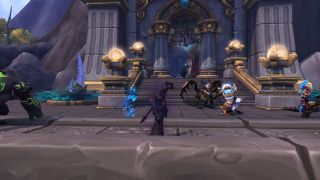 The Revival Catalyst has arrived in World of Warcraft: Dragonflight, alongside the 10.0.5 update. It’s a pretty big deal if you take part in a lot of endgame activities, such as raids or Mythic+. It’s also beneficial to more casual players as it can help you significantly increase your character’s power.

If you played in the later part of Shadowlands, you might be familiar with the Creation Catalyst found in Zereth Mortis, which allowed you to convert regular gear into tier set pieces. The Revival Catalyst is the Dragonflight version, and I’ll show you where to find it in this guide, along with the weekly quest that allows you to unlock the charges to use it.

You can pick up the Revival Catalyst quest, Reviving the Machine, from the Seat of the Aspects in Valdrakken. Look for Watcher Koranos to the left of the dragon aspects—though I should point out that it appears you’ll need to be level 70 to pick up the quest, so if it isn’t an option, that’s probably why.

This quest directs you to the Revival Catalyst’s location, which can be found to the east of Valdrakken at Tyrhold. Antuka, the Catalyst Steward, can be seen standing to the right of the Revival Catalyst console. She’ll offer you the weekly quest, Revival Catalyst, to earn charges that let you use the catalyst. This quest is fairly simple to complete, and any Dragonflight group content should go towards filling the progress bar. It’s also account-wide, so you can do it on any character.

It’s also worth noting that Antuka will only offer this quest if you’ve picked up the Reviving the Machine quest from Valdrakken.

How the Revival Catalyst works

Non-tier gear pieces from Season 1 content—Mythic+ or the Vault of the Incarnates raid—can be transformed into a tier set piece using one charge at the Revival Catalyst. The item you want to transform also needs to be for one of the following slots:

You can transform gear for the slots not listed here, but they won’t become tier pieces and will instead just take on the appearance of the tier set. So, unless you’re big into transmog, it’s unwise to waste a charge. Crafted gear cannot be changed this way.

To use the Revival Catalyst, drag the piece of gear you want to change to the console’s interface and check the previewed result is what you’re expecting. If it looks good, click “Transform” to get your new tier set piece.