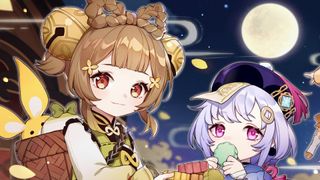 Yaoyao is one Genshin Impact’s newest characters; a four-star Dendro healer who can run around firing radishes that give you health or hurt enemies using her special plushie friend, Yuegui. After Collei (opens in new tab), she’s the first four-star Dendro character to be added to the game, and the good news is that just like Collei, you can get her for free.

If you’re venturing into the Desert of Hadramaveth for the first time, be sure to search underground for new domains like the City of the Deceased (opens in new tab), or Alhaitham (opens in new tab)’s not-at-all gross-sounding ascension material, Sand Grease Pupa (opens in new tab). Now, here’s how to get Yaoyao for free in Genshin Impact.

How to get Yaoyao for free in Genshin Impact

As it was with Yun Jin (opens in new tab) during last year’s Lantern Rite event, there’s a possibility to get Yaoyao for free this year. Previous events have offered the opportunity to “invite” characters to your party, and that’s what you’ll be doing to get Yaoyao this time. If you earn 800 Festive Fever in the Lantern Rite event, you can invite any of the Liyue four-star characters to your party by clicking on the Festive Fever button in the event page. These include:

Even though some of those other characters are very good to grab if you don’t have them, such as Xingqiu, Yun Jin, and Yanfei, this is the only way to get Yaoyao right now apart from wishing on the main banners. Next version she’ll likely be added to the Wanderlust Invocation character pool, but with so many other four-stars, the chance you’d get her there is quite low. This is a rare opportunity to grab a new Dendro character without having to wish on a banner.

You can get Festive Fever by completing any of the four Lantern Rite mini-game events once you’ve finished the first stage of “The Exquisite Night Chimes” quest. If you’re strapped for playing time, I recommend waiting until all of the Paper Theater scenes are up and then completing those. These speedy little puzzles give you 25 Festive Fever each for a max of 300 overall, which is a big chunk of what you need to collect right off the bat.