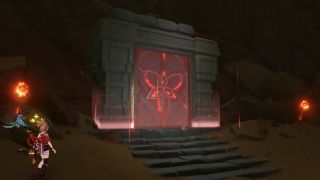 The City of the Deceased is a new domain that was added with the Desert of Hadramaveth region in Genshin Impact 3.4 (opens in new tab). Like other domains, this mini-dungeon offers rewards to those willing to go in search of it and complete the puzzles required to unlock its door. Since a lot of the new region is contained underground, though, it can be a little tricky to locate.

If you’ve got Alhaitham (opens in new tab) and plan to level him fully, you might also want to know how to get Sand Grease Pupa (opens in new tab), his new ascension material. Otherwise, here’s how to find and unlock the new Genshin Impact City of the Deceased domain so you can get those Primogems and one-time rewards.

How to unlock the City of the Deceased Domain

The easiest route is from the Qusayr Al-Inkhida waypoint (Image credit: miHoYo)

There are four torches to light; two next to domain, and two directly behind you (Image credit: miHoYo)

As with a lot of the Desert of Hadramaveth’s special locations, the City of the Deceased domain is located underground in the Wenut Tunnels. The easiest way to get there is to head to the Qusayr Al-Inkhida waypoint. From there, jump off the cliff to the north-east and wind glide down to the giant robot’s hand. Drop down again next to the hand and you’ll find a passage leading underground into the cliffs. Head through the tunnel, past a ruin grader by a tree, and you’ll find the buried entrance to the City of the Deceased. Completing the domain will get you:

First you’ll have to unlock the new domain though by completing a quick torch puzzle, so put on your best Pyro character. There are four torches to light overall; two of them are located to the left and right of the sunken domain door, while the other two are directly behind you, a little lower down. Light all of them, and you’ll be able to use the console that raises the domain door. Now you can head inside and complete the challenge.