Self-care is buying a comically large display to watch anime and play XCOM 2 on. 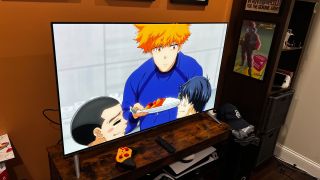 Last year, a Prime Day deal on a monitor caught my eye (opens in new tab), and I vowed to myself that if I ever had a little extra cash to burn (and if it went on sale again), I’d treat myself to it. The Aorus FO48U (opens in new tab) is a 48-inch 4K 120Hz beast of an OLED gaming monitor and exactly the last thing I needed to make my little office/gamer dad den complete.

I’ve been in the market for something to put into my home office solely for gaming, as I currently do all my work and gaming on a really nice 32-inch ROG 4K gaming monitor. I wanted something larger to act as a TV as well to pull me away from my desk after hours to play games or stream movies to help wind me down from a day writing about smelling in VR (opens in new tab).

I’ve never owned an OLED gaming monitor before, but whenever one comes in for review, I’m often left with a tremendous amount of jealousy, wondering to myself, “Man, I want my games to look that good.” With the picture quality, insane response time, and nice viewing angles, OLEDs have it all. The biggest barrier has always been price because let’s face it, even the cheapest OLED at this size and spec will still cost around $800-900 on sale.

After spending some time with the FO48U, I think I made the right choice. The first thing I did was get back into Fornite, my first time playing since its shift to Unreal Engine 5 (opens in new tab). My Master Chief looked great beating up a bunch of soccer players with a giant gravity hammer. OLED displays shine when showcasing games or video with vivid colors, and a chromatic game like Fornite pops on it.

Of course, I’ve been on a sports-anime kick and watching way too much Blue Lock, which has many bright colors and effects. My slow watch of HBO’s The Last of Us was great for showing off the TV’s contrast. Because it’s an OLED, you’re looking at near-perfect blacks and little to no blooming around bright objects on screen. It makes two vastly different viewing experiences equally incredible.

I was torn between this, the LG 48GQ900-B (opens in new tab), and the very popular LG OLED C1 TV, which often ends up in the top spot on our best gaming TVs page. All three are pretty close in specs, picture quality and have similar glass panels. What ended up being the deciding factor was that Aorus has DisplayPort(supports G-Sync and FreeSync), which plays nicer with my gaming PC than an HDMI 2.1 port, though it is nice that there are two of them leaving room for PlayStation 5 and Nintendo Switch.

LG OLED C1 is also a TV, so it comes loaded with many smart TV features I frankly don’t need since all the streaming apps I use are on my Nvidia Shield Pro or gaming consoles. I don’t want a bloated TV OS that needs to be connected to my WiFi. If you were looking for something to put in my living room, on the other hand, the C1 probably gets the edge. LG 48GQ900-B is nearly identical to its TV brother, but the awkward stand at the bottom is a non-starter for me. What can I say? Looks still matter.

Another feather in the FO48U’s cap are some of its extra features that aren’t available on the LG (and other TVs for gaming) and are better for me as a PC gamer such as a black equalizer, a dashboard that displays critical PC info (FPS, CPU/GPU temps, etc.) and a KVM switch if I ever decide to mount this thing above my current monitor for kind of an epic workstation set-up.

I also wish it had more HDMI ports than just the two HDMI 2.1 inputs because it makes it hard to choose which two game consoles to have plugged in at any given time. The FO48U’s front-facing speakers leave a lot to be desired, too.

Aorus FO48U | 48-inch | 4K | OLED | 120Hz | $899 on Newegg (opens in new tab)
If you are primarily a PC gamer looking to go big, this Aorus 48-inch OLED 4K display supports 120Hz to get the most out of your GPU and consoles. It’s had another significant cut in price now that a larger model has been announced, and at this level, it’s a fantastic OLED deal.

LG OLED C1 | 48-inch | 4K | OLED | 120Hz | $799 on Amazon (opens in new tab)
This is the granddaddy of OLED TVs for watching and gaming. It’s fully cut out for fast-paced gaming, whether you’re rigging up a gaming PC or next-gen console to it, thanks to its HDMI 2.1 low-latency connection and G-Sync and FreeSync support. This definitely feels like the pinnacle of TVs, and it sets an exciting precedent for big-screen gaming to come.

I’m glad I was able to get past my crippling shopper’s anxiety and was able to treat myself to something nice that’ll showcase the graphical power of all my gaming hardware and more importantly, pull me away from my work desk. Even as slick looking 1440p 240Hz displays start emerging from CES, I don’t think it’s the right choice for me and the types of games I play, 4K 120Hz is a good spot for me. I also don’t think I can put this huge thing back in the box, so I’m stuck with it.