The beauty of Tchia’s tropical island is matched by all the exciting and fun ways to traverse it. 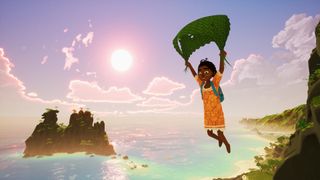 I’ve solved puzzles in adventure games by using a crab before, but I’m pretty sure I’ve never solved a puzzle by becoming a crab.

But that’s what I do in the beta of open world adventure Tchia when I come across a chain I need to cut. Earlier, I picked up a crab on the beach and stuffed it into my backpack. Now I take it out, drop it on the ground, and “soul jump” into it—basically, I’m possessing the crab. Then I scuttle over to the chain and use its (now my) pincers to snip it in two. Then I pop my soul back into my own human body, pick up the crab, and store it in my pack again. Neato.

That’s just one instance of the useful soul-jumping magic on display in Tchia, an open world adventure from developer Awaceb. The game is inspired by the island of New Caledonia in the southwest Pacific Ocean, where the co-founders of Awaceb grew up. In the beta I’m playing I’ve got access to only one of the game’s three islands, and while exploring a third of a game world seems like it would be restrictive, the island I’m on is genuinely massive.

It’s also stunning to look at: a lush and tropical world with beaches, forests, mountains, rivers, villages, camps, hidden grottos, and deep caverns. Plus it’s packed with all sorts of beautiful wildlife like deer, boar, lizards, a number of different birds, plus aquatic life like fish, sharks, and sea turtles.

Thanks to my magic soul-transferring powers, I can become any of those animals, at least briefly. All I need to do is get close to a creature and I can leap into its body. If it’s a bird, I can take flight, if it’s a turtle I can glide through the water, and if it’s a deer I can thunder across the landscape much faster than my human legs can carry me. The magical possession only lasts until Tchia’s soul meter runs out, but while that’s maybe 30 seconds or so, it’s plenty of time to have fun and even solve a few little problems.

Often these animals I briefly possess have abilities I can use, like the crab I possessed to cut that chain. But that’s just the start. One quest required me to find a chicken egg, but even after finding a small farm with a bunch of chickens strolling around, I wasn’t sure how to acquire an egg from one. I tried talking to the farmer, I searched the area near the chickens, but I was stumped until I remembered, oh yeah! I can become a chicken.

I zapped my soul into one of the chickens and sure enough, I could click the mouse button to lay an egg. It was cracked—that’s the risk with carelessly firing an egg out of your butt, I guess—but I could still zip my soul back out of the chicken, become human, pick up the egg, and put it into my backpack. Mission complete.

Other animals have skills I haven’t found a use for yet, but I’m confident I will. Possess a bat and you can use night vision while flapping around on your leathery wings. Both dogs and wild boars are able to dig holes in the ground, which I’m sure will be useful at some point—I just need to find the right spot to dig. And I’m sure becoming a sea creature will lead to some undersea discoveries once I have more time to explore the depths of the ocean surrounding the island. One bird I possessed could poop at will when clicking the mouse… I’m not sure if that’s a skill I’ll need or if it’s just a gag, but either way it’s fun to do.

If that’s not enough, Tchia can possess not just living creatures but also inanimate objects, though once she’s soul-hopped into a rock, lantern, barrel, or coconut, those objects definitely become animated. Don’t want to risk climbing down a steep cliff? Just leap Tchia’s soul in a nearby rock and roll yourself off the edge. Rocks can handle long falls, even if people can’t. And you don’t even need a particular reason to possess something: rolling down the road as a barrel is fun on its own.

Possession is also handy for taking on Maano, the villains of the island. The Maano are weird, spooky humanoids made of fabric that can be found in small camps around the island, sort of like cloth zombies. They’re pretty slow, but they’ll fling scraps of fabric at you, which will tangle you up, requiring you to hammer the space bar to escape. To defeat them you need to set them on fire, which is where the possession skill helps.

Sure, you can grab nearby lanterns or gas cans, hold them over your head, and fling them at the cloth zombies, but it’s far more effective to possess a lantern, fling yourself at a Maano, then de-posses it just before it hits. Boom! The lantern will ignite the enemy as you safely leap away in your own body. With some possession practice you can take out a camp of Maano in seconds, burning the creepy, clothy ghouls to ash.

But don’t think for a minute that Tchia needs to soul-hop into birds or dogs or gas cans to get things done: she has plenty of talents herself, especially when it comes to traveling across the island. She can slide on her butt down steep hills, gently soar through the air with a glider (until her stamina runs out), and even clamber to the top of a tree, rock it back and forth, and fling herself from it like a catapult. With the soul-jump and her natural traversal skills, Tchia is like Spider-Man crossed with Corvo Attano, only, you know, she’s a sweet little kid. Once I’ve got some practice with her skills and powers, the island quickly transforms from a beautiful view to an acrobatic playground.

Just one example: While at the top of a mountain I spotted a tiny seaside town along the coast, far off in the distance. I leapt off and sailed in the town’s direction using my colorful glider, but as my stamina ran out I was still far, far above the ground. I soul-jumped into a passing bird and flapped my wings to cover more distance, but was still pretty high up when my soul-meter started running low. I leapt back into human form, fell for a while, then spied a rock on the ground, which I soul-jumped into. Bingo. I was now safely on the ground and had nearly reached the distant town in under a minute, while it would have taken ages to get that far on foot.

Tchia’s goal isn’t just exploring for the fun of it (though there’s plenty of that). She is searching for her father, who has been abducted by an evil tyrant named Meavora—the same guy who animated those creepy cloth zombies. And while searching for her dad, there are plenty of other quests to complete, some given by other inhabitants of the island. In fact, the beta began with a woman getting my attention by firing a rifle in the air—a pretty alarming moment considering Tchia is just a little kid.

But it turns out this gun-toting villager just wanted me to find her a crab to cook for dinner, which I eventually did (it might have even been the same crab I possessed to snip that chain). Once I deliver her crab, she invites me to dinner, and during a cooking minigame I bond with her daughter, who is about Tchia’s age. Despite the jarring gunshot that started this relationship, it turns into a sweet and gentle friendship and there’s a nice moment of community after dinner where I play my ukulele (another minigame) with other musicians while the townsfolk dance.

Also helping me forget that this woman fired a gun in my vicinity is the fact that she rewards me with a treasure map, my number one favorite item in open world games and the perfect excuse to explore more of the vast island. At a dock on the coast I help myself to a raft, raise the sail, and cruise serenely around the blue waters of the island looking for the landmark shown on the map, which takes me to a treasure chest… which contains another map. In fact, it leads to a chain of treasure hunts, which not only provide me with new maps but a story that gives me more details about the island’s troubled history.

It encourages me to close the map and look around at the landmarks to figure out where I really am.

When I can pull my eyes away from the beautiful island vistas and take a break from possessing sharks and boars, there are a lot of details to admire, too. When Tchia swims underwater (as a human) you can actually see her holding her breath, her cheeks puffed up with a gulp of air. One of my favorite little touches involves the game’s map. Tchia has a map of the island, and while it shows the shape of the island and the locations you’ve discovered, there’s an interesting little feature where you can tap C to ask Tchia where she is.

And the thing is, she doesn’t quite know. She’ll mention she thinks she’s close to a major location and draw a big circle around the portion of the island she’s on, but it’s vague. And it feels honest, like the way I’d probably have to guess roughly where I am if I were on an island holding a map, and it encourages me to close the map and look around at the landmarks to figure out where I really am. It’s a nice touch.

Despite several long sessions of the Tchia beta ranging all over the island I feel like I’ve only found a portion of the mysteries and activities it hides. I’ve done a lot of exploring, sailing, and spelunking. I’ve played minigames like platform diving, rock-balancing, and totem carving. I’ve found collectibles, and I’ve unlocked fun outfits and accessories and backpacks for Tchia.

I honestly can’t wait to dive in completely when Tchia releases later this year. It feels like an enormous ode to the real-life island, packed with details about its people and culture—even the voice actors are locals of New Caledonia. I’m eager to keep exploring the beautiful and diverse world and uncovering more of its treasures, and not just the ones inside locked chests.