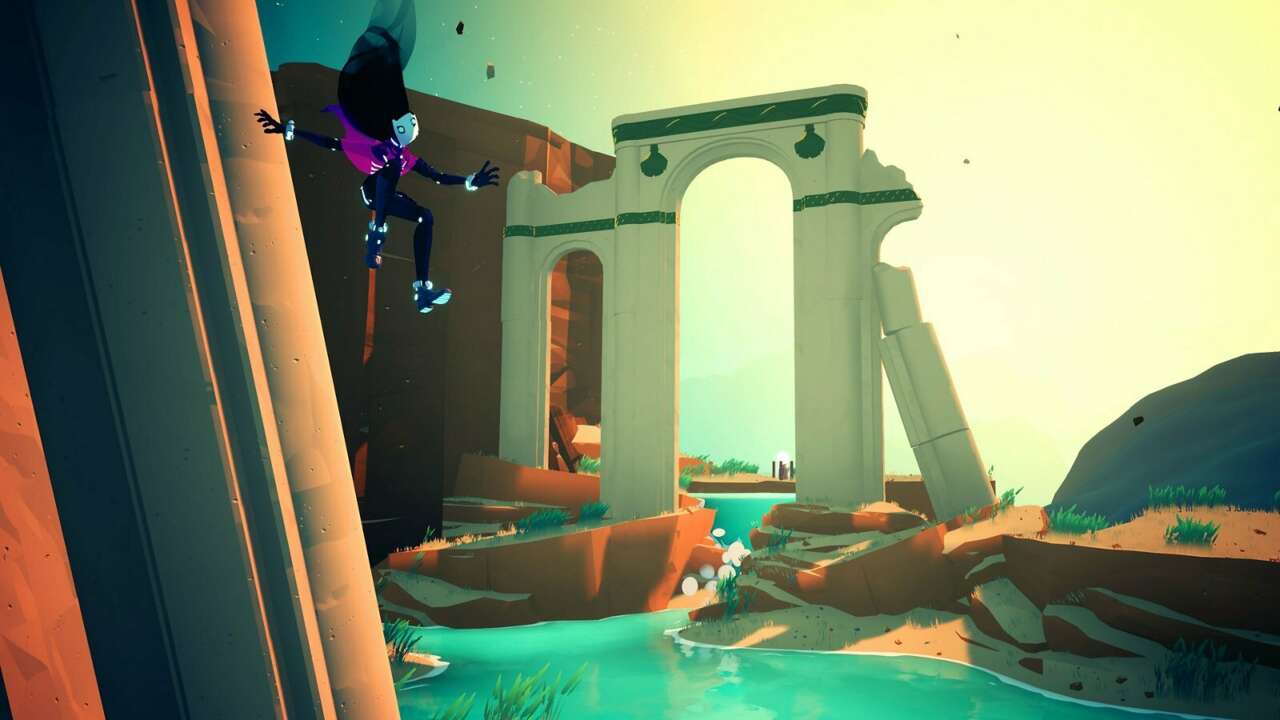 Like Super Mario 64, Solar Ash Is Built Around Mastering Mechanics You’ll Know From The Start

I recently got the chance to attend a hands-off preview for Solar Ash to get eyes on how the game looked outside an orchestrated trailer. Despite the seemingly effortless movement behind protagonist Rei’s actions, there was a palpable tension surrounding her as she skated over clouds, grinded across rails, and dashed from one end of a room to another. Since I didn’t have the chance to try out the game myself, I couldn’t tell, but it seemed as if every movement was carefully calculated.

With how graceful Rei was moving through the level, it all looked rather simple. But if the repeated efforts to correctly maneuver through the same time-based puzzle or multiphase boss fight were any indication, Solar Ash is anything but simple.

Though Solar Ash is a movement-based game, creative director Alx Preston told me that just going fast isn’t the goal. Solar Ash is a game all about using different moves to achieve the right level of speed and get the ideal window for timing an attack. It’s as much about achieving mastery in how you move as it is about moving quickly.

To that end, Rei doesn’t grow stronger and acquire new moves over the course of Solar Ash to help her go faster. The player has all of her moves from the start, but the game’s high skill ceiling will push you to perform those same moves in different combinations to pull off faster and more efficient means of movement–think freerunning in Titanfall 2 or air dribbling in Rocket League. Solar Ash pulls from earlier inspirations, however; Preston compares it to Super Mario 64.

“[Solar Ash] is intentionally set up to be a little bit Mario-style where you have your suite of moves from the start,” Preston told me. “You can get some different [abilities] throughout via different suit powers, but you can beat the game without getting any of them.”

“It’s a little bit like Super Mario 64–the depth of control out of the box, you have a lot to learn in order to build your skill and get better. To me, that’s the most enjoyable start–good character controls out of the box.”

Solar Ash is the sophomore effort from developer Heart Machine, the studio behind 2016’s Hyper Light Drifter. You play as Rei, a voidrunner who enters a black hole in order to save her planet. According to Preston, Solar Ash is a game where everyone is trying to “escape their own pain.”

“You’ll learn about the story in a multitude of ways,” Preston said. “We have a lot of visual storytelling that’s prominent throughout the game. It’s all very meticulously crafted. We introduced [voice-over] with our characters as well. It’s going to run the gamut of storytelling methodologies. We put a lot of time and care and effort into those story spaces and set pieces to make sure it communicates things about the world that you wouldn’t otherwise know through just pure text. So that observation is going to be important.”

As just mentioned, Rei and the other characters actually speak in Solar Ash, a major departure from Hyper Light Drifter which didn’t feature voices (or even words) and conveyed conversations via still images. When speaking to other characters in Solar Ash, the player is given dialogue options that allow Rei to dig deeper into the lore of the game–based on the hands-off preview, it looks like something that will regularly pop up throughout the campaign.

Which isn’t to say that Solar Ash is crowded with folks to talk to–similar to Hyper Light Drifter, this is a lonely experience. But even that loneliness will be different this time around, as Rei will quietly muse about what she sees and is feeling instead of remaining stoically silent.

“She definitely has her own handful of bits of dialogue in any given zone,” Preston said. “She comments on things. She reminds players of certain things at different times. We have her speaking a good amount.”

“But we try to leave enough open for interpretation for the player, because those are the types of stories that I enjoy the most–the ones that can have explicit components, where they can be telling a clear story, but they have an implicit nature to really let the player make the story their own.”

So even though Solar Ash isn’t a linear game, it’s been designed with a definitive overarching narrative path. You can wander off that path for optional content, but you can’t explore all of the biomes from the very start and break the intended arc of the story. Heart Machine designed Solar Ash with movement mechanics in mind first, but this isn’t like Neon White where speedrunning and sequence breaking has been planned for in advance.

“You will learn the spaces pretty well and learn which things you have to do and which things you don’t,” Preston said. “I’m very curious to see if anybody will be able to sequence break things–I’m sure that they’ll find some way, but there’s nothing explicit.”

There are tools in the game to help you stay on the right track. Solar Ash doesn’t have a map; instead, the design of each biome guides the player towards their objective. “We spent a lot of time on the environments and sight lines, guiding the player’s eyes to certain things,” Preston said.

And beyond that, Rei carries a scanner to help her highlight and pinpoint objectives, though it won’t provide the player with as much information as the Arkham series’ detective vision or Assassin’s Creed’s eagle vision. “It’s really just about your core objectives,” Preston said. “It’s not going to do anything too much more granular than that. We want to let players explore and not hold their hands.”

We’ll be able to see soon enough, given that Solar Ash’s release date is right around the corner. Solar Ash is scheduled to launch for PS5, PS4, and PC on October 26.