It joins the company’s already substantial collection of word games and quizzes. 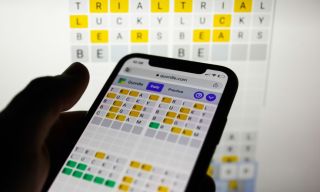 Quordle asks you to solve four Wordles simultaneously, all on one big grid. Every guess you make is applied to all four—even with a generous nine guesses, it’s still a nightmare of brain multitasking.

Quordle’s certainly not the first word game in the genre to get snapped up. Wordle was, of course, acquired by the New York Times (opens in new tab) at the start of last year for an amount “in the low seven figures”, while Heardle (Wordle with music) was bought by Spotify (opens in new tab) last summer. If you’re a company CEO looking for your own Wordle-like to buy, perhaps as a gift for your secretary, why not have a browse of our list of the best ones (opens in new tab)? I bet you could get Squareword (opens in new tab) for a fair price these days.