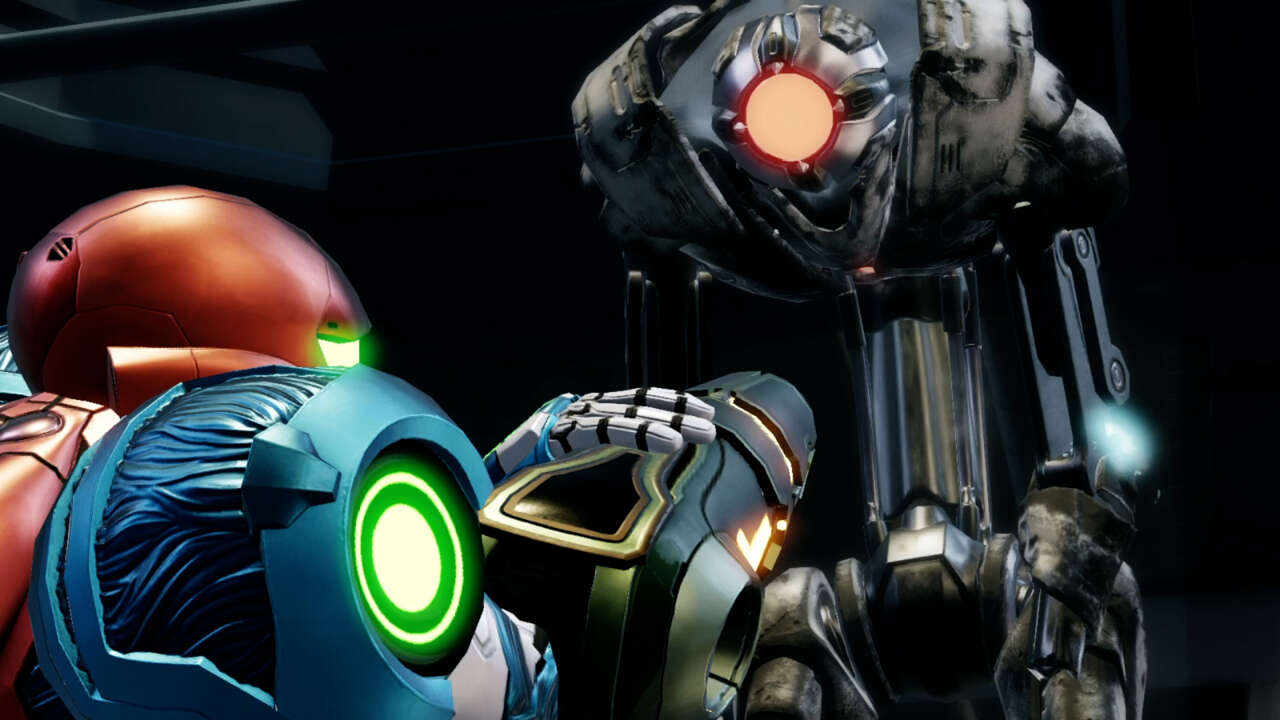 Metroid Dread evolves upon its predecessor, Metroid Fusion, by taking that game’s SA-X and multiplying it by seven. Similar to the SA-X, Dread’s seven EMMI pursue Samus upon seeing her, and most of them possess the abilities that the Federation made for Samus or Adam (a Federation-designed AI) observed her acquiring in Fusion. Given their designation numbers refer specifically to Samus’ abilities, it’s likely the Federation originally built each one as a means of replacing and/or killing Samus following her insubordinate actions in Fusion. But regardless of their original intended purpose, all that matters is that these robots have been reprogrammed to hunt Samus and they are uniquely tailored for the job–even when seriously damaged, all seven are immune to Samus’ traditional attacks and they all can kill her in a single, hard-to-avoid strike.

If you’re struggling with overcoming the seven EMMI that Samus encounters in Dread, we’ve got a few tips and tricks for handling each one. Though all EMMI (with the exception of the first one) move about the map in the same way, each hunts Samus differently depending on the unique ability they have. You’ll usually encounter each EMMI several times before being able to defeat it–the key to destroying each one is to find an area’s map room, which will reveal the location of the area’s Central Unit. Destroying a Central Unit allows Samus to temporarily unlock the Omega Cannon, the only weapon in her arsenal powerful enough to destroy an EMMI. Samus can then take that EMMI’s unique skill, reclaiming her lost abilities through the Federation’s copies.

Of general note: All EMMI can be countered, though it’s tough to do so. Samus can counter the EMMI when they initially pin her to the ground and if she misses, there’s another opportunity to do so as the EMMI stabs into her to extract her DNA–countering an EMMI stuns it for a few seconds, giving you ample chance to flee or slide beneath them if they’re blocking the exit. Both opportunities to counter are marked by a very brief flash, so you’ll have to be exceptionally quick on the draw. It should become a naturally easier process over time though, as you begin to recognize the different tempo patterns of each EMMI attack and can predict when to counter based on its movements. And as Adam tells you, once you unlock the Phantom Cloak (you’ll need to beat Corpius, one of the game’s 10 bosses, to do so), you can more easily hide from each EMMI–a much simpler process than countering them.

The first EMMI you face is almost completely broken and very much not a threat. Simply run away from it and follow the directions for charging and using the Omega Cannon and you’ll take it out, no sweat.

Samus does not unlock any abilities for defeating EMMI-01P, implying it could be too damaged or Samus already possesses whatever ability “P” stands for. The “P” could also just as easily stand for “Powerless,” meaning it’s the only EMMI to not have a copy of one of Samus’ Power Suit abilities encoded into it, and thus there’s no relevant data there for Samus to absorb.

The second EMMI actually puts up a fight. This sucker can climb on walls and the ceiling like a spider, so fleeing from it is a bit trickier than EMMI-01P. Because this EMMI can easily chase you upwards, running from it in long horizontal rooms with lots of small crawl spaces is the easiest way to get away with enough time to hide.

Once you find the Omega Cannon, you’ll have to melt away the faceplate protecting EMMI-02SM’s weak point. This is a lot easier to do if you find a room with a long corridor, allowing you the time to land your hits–if you don’t completely melt the faceplate in a single attempt, it will cool down and reset, so you have to find enough space to get all the necessary shots in. Defeating this EMMI allows Samus to take its ability to cling to walls and ceilings, unlocking Spider Magnet.

The third EMMI has the ability to shrink its overall size and fit into narrow spaces, allowing it to chase you through narrow crevices that Samus can slide through. Fortunately for you, this EMMI is rather slow when it’s not sneaking through crawl spaces. It will struggle to catch up to Samus if you get into open spaces where you can more easily run and jump.

Like EMMI-02SM, this EMMI has a faceplate you have to melt off before you can finish it with the Omega Cannon. Unlike EMMI-02SM, EMMI-03MB doesn’t struggle when crawling so don’t think you can slow it down by trying to hit it as it’s slinking out of a vent. Defeat EMMI-03MB to take its ability to fit into small spaces, unlocking Morph Ball.

EMMI-04SB is the opposite of EMMI-03MB, excelling in places where there are no crawl spaces. When it gets to large open areas, this EMMI can dash forward with tremendous speed. Sliding into crawl spaces and jumping from platform to platform in vertical rooms are the easiest way to escape this speedy EMMI.

Same deal as the past few EMMIs: You have to melt this robot’s faceplate before finishing it off with the Omega Cannon. Easier said than done, of course, given the speed this EMMI can achieve in long hallways–just be strategic, and then you can take its ability to reach high speed in open spaces, unlocking Speed Booster.

The fifth EMMI has the just wonderful ability to freeze you in place, embodying the most annoying and terrifying quality of Metroid Fusion’s SA-X. With its attack, EMMI-05IM can stop you in your tracks mid-escape, giving it the opportunity to easily chase you down and kill you. This is the EMMI that is going to get you to regularly use Phantom Cloak. EMMI-05IM’s biggest weakness is that it needs to see you in order to chase after and shoot you.

EMMI-05IM’s icy attack can also be annoying to deal with when you’re trying to melt off its faceplate to kill it with the Omega Cannon, so you’ll need to be ready to shoot at it before it can get a lock on you. Defeating EMMI-05IM unlocks Ice Missiles, which grant Samus the ability to freeze enemies.

In comparison to EMMI-05IM, EMMI-06WB isn’t all that bad. Granted, it’s got a powerful ability–EMMI-06WB can fire a beam through walls that stuns Samus. The beam doesn’t stun for as long as EMMI-05IM’s Ice Missile attack though, and it moves relatively slowly, making it easy to dodge. Put enough distance between you and this EMMI and it doesn’t pose much threat. Plus, you’ve got Space Jump now–it doesn’t matter how fast or relentless an EMMI is, it can’t follow Samus into the air.

Though EMMI-06WB is easy to escape, it’s rather difficult to defeat. There aren’t many spaces within the area it patrols that afford you enough room to get your shots in. But succeed in doing so, and Samus will take EMMI-06WB’s ability to shoot enemies and objects through walls, unlocking Wave Beam.

The seventh and final EMMI can plant explosives strong enough to destroy huge parts of the environment. Thankfully, in the midst of your confrontation, Samus unlocks a powerful new skill, one that will help you take down EMMI-07PB without the need to use the Omega Cannon. Defeat EMMI-07PB and Samus will absorb its ability to plant explosives, unlocking Power Bomb.

Apple removes the Apple Watch Series 6 from its official lineup