My nemesis has been defeated. 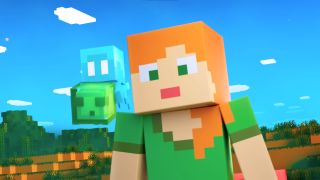 In my many years of playing Minecraft, one foe has plagued my every step across the cubic landscape. My enemy waits until I am complacent and attacks. I’m usually at my most vulnerable when I’ve stopped thinking about my nemesis, and then a new update lands. Other players may fear the creeper, lie awake contemplating the enderman, or swear vengeance on the illager, but my sworn adversary is buried in Minecraft’s settings menu:

In the latest snapshot 23W03A for Minecraft, my antagonist has finally been put to rest. The auto-jump feature is now off by default. Buried amongst minor changes like a fix for armor stands retaining their custom names when broken and the addition of arrow key controls for menu navigation, the real star of the snapshot show is auto-jump no longer being auto-on.

First introduced from Pocket Edition to Java in the 1.10 update back in 2016, auto-jump launches your character up whenever you bump into basically anything you’re capable of jumping on. A frustration familiar to Assassins Creed fans who find their parkour-happy characters constantly sticking to walls against the player’s will, Minecraft is constantly forcing me to jump onto, off, and into things I’d rather not.

While it does save wearing out your spacebar, auto-jump also routinely tramples crops, throws you off cliffs and scaffolding while building, and generally can make your life a living hell if you’re used to jumping manually. Each new major update, reinstall, or even a fresh install of Minecraft mods has me causing all sorts of mildly annoying havoc with auto-jump turned back on by default.

Auto-jump truly became my sworn blood enemy when it threw me into the endless void on one of my Skyblock playthroughs, carrying an entire inventory of critical items with me. As I shouted and shook my fist at the sky, I vowed never to forgive Minecraft’s most obnoxious helper. You might say it’s my fault for carrying so many critical items, instead of, you know, putting them in a chest. But let’s not lose focus on the real enemy here: a helpful accessibility feature.

While it’s a victory for me to have auto-jump disabled by default, this is also a critical feature for gamers with a wide variety of disabilities, and it’s still going to be available for anyone who needs it—or for those who just prefer it, you monsters.

If you do need to turn auto-jump back on, it’s a fairly simple process:

Open the options menu from either the in-game ESC menu or Minecraft’s main menuOpen the “Controls” submenuClick “Auto-Jump: OFF” to set it back to onClick “Done” and you should be all set

Minecraft potions: Recipes and brewing guide
Minecraft enchantments: Magical reference list
Minecraft villagers: All the jobs and trades
Minecraft realms: How to start your own server