Ubisoft said it halted work on Project Q, which it announced last year, in order to focus resources on “priority projects.” 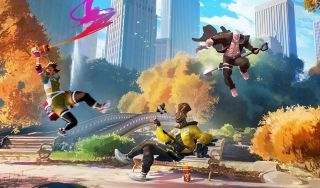 Ubisoft has confirmed today that Project Q (opens in new tab), the “PvP battle arena game” that was officially revealed in 2022 after numerous leaks, has been cancelled. This continues the wave of tribulations at the publisher that saw it cancel three unannounced projects and delay Skull & Bones (opens in new tab) for at least six times, news that has seen the studio’s share price cut in half over the last six months.

Project Q first came to light in September 2021 courtesy of a GeForce Now database leak that contained a slew of unannounced game titles—many of which have since proven to be real (opens in new tab). Also included in the list were four games purportedly from Ubisoft with “Project” codenames: Project Meteor, Project Orlando, Project Over, and Project Q. Ubisoft denounced the whole thing as “speculative (opens in new tab),” but of course that was a mistake: It was the only publisher making a stink about it, and so everyone’s attention immediately focused on Ubisoft’s listed games.

In April 2022, more information about the game leaked on Exputer (opens in new tab), and at that point Ubisoft threw in the towel.

“‍Introducing codename Project Q, a team battle arena letting players truly own the experience!” it tweeted (opens in new tab) a couple days after the second leak. “The game is in early development and we will keep testing, so for now all you can do is register for upcoming tests.

“By the way, this is not a Battle Royale. The game will feature a variety of PvP modes with one single goal in mind: FUN!”

Unfortunately, it now seems that the fun is done. Following a report of the cancellation on Insider Gaming (opens in new tab) yesterday, Ubisoft has confirmed with VGC (opens in new tab) that Project Q is no longer in development.

“We can confirm we will no longer support the development of Project Q in order to focus on priority projects, to which our teams are being reallocated,” Ubisoft said.

Ubisoft announced last week that it had cancelled the development of three unannounced projects (opens in new tab) in order to focus its resources on existing brands and live services—and, more broadly, to turn around its badly flagging fortunes. My assumption is that Project Q was not one of them because it had previously been announced, although it’s arguable that the use of a codename means it’s not fully revealed and thus possibly one of the three games confirmed as cancelled last week.

I’ve reached out to Ubisoft to clarify the situation and will update if I receive a reply, but either way it’s more bad news for Ubisoft. Project Q probably wasn’t on anyone’s extremely informative most anticipated games (opens in new tab) list, but it was at least a known quantity, and far enough along in the development process for Ubisoft to talk about it and take playtest signups. Shutting it down may not deprive the world of a potentially great game—honestly, the one piece of concept art I’ve seen makes me think of a slightly less hyper Hyper Scape (opens in new tab)—but Ubisoft’s reputation is already badly battered, largely by its perceived inability to simply complete and release games. Adding another log to that fire is something Ubisoft does not need right now.