The Chinese publisher’s staff went on a raid. 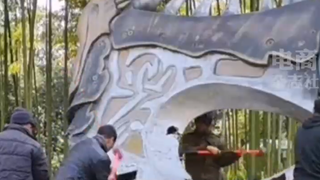 Blizzard’s games have been published in China by NetEase for 14 years, a partnership that has been enormously successful for both companies. The Chinese publisher’s rapacious growth over the last decade was turbo-charged by the money it made from the games’ success and, while NetEase’s success can hardly be attributed solely to that, it is now one of the largest internet and videogame companies in the world.

But things have gone sour in a manner that, given the size of the respective companies, can only be called hilariously petty.

It was announced late last year that the Blizzard-NetEase deal would not be renewed. This sparked a minor war of words between the companies and, last week, Blizzard blamed NetEase for the problems (opens in new tab) after it refused to agree to a six month extension of the current terms. Now NetEase has come out swinging, literally.

The importance of the Blizzard deal to NetEase had a symbol: A giant statue of World of Warcraft’s legendary two-handed axe Gorehowl outside the studio that handled the Blizzard licenses. On a livestream, segments of which have subsequently been uploaded to social media (thanks, WoWhead (opens in new tab)), NetEase employees surround this statue and begin smashing it to pieces.

By the end there’s nothing left of Gorehowl but rubble: Funnily enough, in the lore this weapon is involved in some epic betrayals. After the statue is destroyed, and seemingly to rub salt in the wound, the NetEase employees are seen drinking ‘Blizzard’ green tea. I can’t speak Chinese so take this with a pinch of salt, but this has been theorised to be a reference to a misogynistic piece of internet slang that translates as “green tea bitch” .(绿茶婊). The implication is essentially of someone who presents as pure but is devious and greedy.

NetEase wasn’t done though. It also published a strongly worded statement (opens in new tab) about what’s been going on on its official Weibo page. Firstly NetEase claims that the extension Blizzard offered was “unequal” and “unfair”, and that its subsequent public statements were “outrageous, inappropriate, and not in line with business logic”.

Then it really kicked off. “[Blizzard’s] arrogance did not take into account the position it has left players and NetEase in by demanding everything. It is like riding a mule to find a horse, the behaviour of people divorced but still trying to live together”.

NetEase denies it ever sought any IP rights from Blizzard, then goes on to criticise the save transfer functionality that Blizzard China has released for the game (which users have also said there are problems with). It says Blizzard “unilaterally” developed this, NetEase hasn’t tested it, warns of security risks, and says Blizzard bears full responsibility for any problems.

NetEase then signs off in rather poetic fashion, with an odd coda:

“Of course, the most important thing is to wish everyone a happy new year”.

Well. I’ve reached out to Blizzard for comment, and will update with any response.

There is often bad blood in the corporate world but, with companies of this size, rarely is there such a public airing of grievances. NetEase clearly feels that Blizzard has somehow disrespected or wronged it, while Blizzard may well be wondering what it ever did to turn such a successful partnership so utterly sour.

The publishing deal between Blizzard and NetEase expires on 23 January, at which time the former’s games will cease to operate in China. Their return depends on Blizzard finding another publishing partner in the region, but NetEase may well be delivering a stark message from the CCP to western companies making these kind of huge and time-consuming games: We don’t want your sort round here no more.