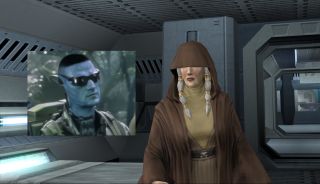 GamePressure (opens in new tab) recently published an interview with Feargus Urquhart, RPG standby Obsidian Entertainment’s CEO and one of its founders. The sweeping interview touched on Obsidian’s key moments and future plans after one of its best years ever (opens in new tab), but I was most intrigued by the snippets of CRPG deep lore that were dredged up over the course of the conversation.

Most shocking to me was the mention that Obsidian was, at one point, in talks to create a videogame based on Avatar 2. “Back then, we were talking with them [James Cameron and 20th Century Fox] about making an Avatar 2 game,” Urquhart explained. “I don’t even know how long ago. Eight, six years, something like that.”

That would date this proposal to the mid-2010s, prior to Avatar: The Way of Water’s official reveal and well before Obsidian was acquired by Microsoft. As both an Obsidian fan and a true Cameron head, a devotee of The Way of Water, my mind boggles. Maybe they would have had an angry old nihilist Na’vi (opens in new tab) lecture you about how Eywa (the immortal world spirit connecting all life on the Planet Pandora) is actually evil?

These days, Ubisoft is quietly working on its own Avatar videogame, while this actually wasn’t Obsidian’s first brush with adapting the work of Box Office Jimmy C⁠—a canceled Aliens project in the early 2010s was a contributing factor to Obsidian’s dire straits at the time, inspiring the Hail Mary play to Kickstart Pillars of Eternity, saving the company. Urquhart credits this move to Obsidian employees Josh Sawyer and Adam Brennecke “pushing” him to consider crowdfunding.

Urquhart also reiterated his interest in, as well as the lack of any concrete action on, Obsidian returning to the Fallout series: “We’re not working on Fallout, and we haven’t even talked about what it would be.”

The whole interview at GamePressure (opens in new tab) is well worth a read for any Obsidian heads out there. Of course, if you decide you don’t like Urquhart for whatever reason, you could always send him, his Black Isle Bastards, and the good ship The Heaving Harlot to the briny deep in Pillars of Eternity: Deadfire (opens in new tab).