In the absence of anything else to talk about, Overwatch players look to Mercy. 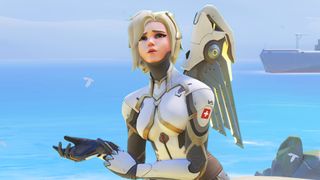 The Overwatch 2 community, particularly influencers and those in their orbit, are upset once again about Mercy, a hero many have maligned since the original game’s 2016 release. She is often the scapegoat for the shooter’s balance issues, a healer who many players point to as the parasite leeching away Overwatch’s competitive integrity. Instead of focusing on the new problems with powerful heroes like Sojourn and the lackluster events (opens in new tab), they’ve traveled back in time to reignite the tired debates about Mercy.

Overwatch 2 is currently in its second season after replacing the original game with a prettier and buggier sequel last October. Players are unhappy with a lot of things about its switch to a free-to-play, live service model, but one issue that many people can agree on is the slow pace of balance patches. Whether you play Competitive or stick to Quick Play, Blizzard’s infrequent patches have led to some frustrating periods with overpowered heroes and annoying metas.

Sojourn, a new DPS hero with a railgun and the ability to quickly slide around the map, continues to be a thorn in the game’s balance even after Blizzard’s attempt to loosen her grip on the meta in its December patch. In the span of a few seconds, Sojourn can fire her main machinegun at enemies, charge up her secondary railgun shot, and land a headshot that will instantly kill most heroes if they’re not at full health—all while sliding in and out of cover. With a Mercy damage boost, the headshot is a guaranteed kill.

Overwatch 2 games are often decided by which team can secure the fastest kills, because it’s hard to win a team fight once someone has a numbers advantage. Sojourn, despite some slight nerfs to her damage, is the most consistent hero for scoring rapid kills and is one of the most played DPS heroes among Overwatch 2’s top-ranked players. Her ability to suddenly one-shot enemies without cleary telegraphing her attacks is unique to Overwatch’s hero roster (Widowmaker is another sniper who can one-shot, but she has to stand still and charge up her scope). Her dominance has driven players of all ranks (opens in new tab) up the wall for so long that some are starting to scrutinize the entire state of the game (opens in new tab). And whenever players and content creators talk balance, the conversation inevitably comes back to Mercy.

Playing a healer in Overwatch 2 right now is rough (opens in new tab). With the sequel’s reduced team sizes and faster pace, support players are often more effective at dealing damage and setting up eliminations than they are at saving lives. That hybrid healer/damage role doesn’t really work for Mercy, as she’s the only hero that lacks a reliable way to score kills herself. With her staff that can heal single targets or buff their damage, Mercy is best used as a way to help other heroes do the killing for her. In season one, she was widely considered one of the weakest supports (opens in new tab). But when Blizzard nerfed Sojourn’s one-shot, Mercy’s pick rate in the highest ranks of Competitive went up because of her ability to essentially undo Sojourn’s nerf with her damage boost. Overpowered Sojourn is back, and in the absence of another much-needed Sojourn nerf from Blizzard (that we know of), the most competitive and dedicated players have now decided that Mercy, not the hero actually doing all the killing, is the real culprit.

mercy is the biggest balance problem in overwatch and it will not be fun until shes fixed or out of metaJanuary 11, 2023

One thing that players tend to ignore when complaining about Mercy’s powerful damage boost is the fact that someone is actively playing her while she’s doing this. To them, she’s a free, unearned buff, not a hero with a high skill ceiling for movement and healing priorities, a distinct role with extensive guides and resources (opens in new tab) on how to master her kit. Mercy is “unhealthy” (opens in new tab) for the game because she supports her teammates like her role is intended to do. The argument tends to frame a Sojourn with a Mercy boosting her as one player with an unfair advantage, not two players working together.

In a team-based game like Overwatch 2, this criticism doesn’t make any sense: collaborative combat is the entire point. Mercy has been in the game since (opens in new tab)day one and has rarely been at the center of its strongest metas.

Mercy has historically been a topic for debate in the community for a number of reasons (opens in new tab), but primarily because her pacifistic kit is built exclusively around helping others. She can heal, damage boost, and resurrect allies as well as fly between them. She’s almost entirely reliant on her team to stay alive and meaningfully contribute to the match. Alone, Mercy isn’t that threatening, but surrounded by a team of heroes that synergize with her elusive mobility, she can feel as oppressive and dominant as any other support.

Those looking to knock Mercy down a peg argue that her powerful ability to resurrect a teammate and essentially undo an earned kill betrays the spirit of a competitive shooter, but it actually perfectly the fits the spirit of Overwatch—a game about the clash of traditional FPS skills with non-traditional support skills. Aim versus tactics, and the synergy that’s born out of the two, is the core of Overwatch. It’s what makes Overwatch so distinct from CS:GO and Valorant. Compared to those games, Overwatch is much closer to a MOBA. Mercy’s pacifist design doesn’t break the rules of shooters, it expands what it means to be a skillful FPS player. Playing Mercy well means fighting to stay alive and min-maxing your healing and damage boost uptime.

Mercy isn’t unhealthy for the game, she’s essential to its DNA.

You could teach a college course on how to best use her limited flight ability, when to heal versus damage, and how to exploit weird movement tricks. But because she doesn’t have to aim, the effort it takes to play her well is often undervalued by those who’d like to see Overwatch’s asymmetrical design sanded down until it resembles more “fair,” traditional shooters.

In a game about unfair abilities that are kept in check by an opposing team with their own unfair abilities, Mercy’s kit is no different from Baptiste’s Immortality Field or Ana’s Sleep Dart. Part of the fun of Overwatch is its blend of mechanical skill and rock-paper-scissors interactions within the framework of an objective-based FPS. Mercy isn’t unhealthy for the game, she’s essential to its DNA.

Mercy’s damage boost, the ability that prompted this week’s discourse, isn’t unique either. Players have pointed out that other damage boosts in the game don’t get the same level of vitriol.

“Mercy is the problem but I get more damage amplified using Zen,” wrote thewinterofmylife (opens in new tab) in a Reddit thread about Mercy. “No one is out here crying about [Orb of Discord].”

Outside of the top Competitive ranks where most of these complaints come from, coordination is loose, and when your team isn’t playing together, Mercy’s impact sinks. “In gold/platinum where [the] majority of the playerbase play, she really isn’t that big of an issue,” wrote pepelepewpew_ow (opens in new tab).

“I feel like Mercy often gets blamed when there’s balance issues with other heroes, simply because she tends to amplify those issues by nature.” YouTube commenter Namtellectjoonal (opens in new tab) wrote under Stylosa’s video (opens in new tab) about the topic.

Overwatch is a fragile ecosystem. When you change one hero, it affects another. Speaking to NME (opens in new tab), game director Aaron Keller pointed out how Roadhog managed to become the new king of the tank role despite the team making no changes to him. The game’s lack of shields, stuns, and the recent introduction of an ability that cleanses harmful effects with Kiriko, all contributed to Roadhog’s rise. And yet, nobody is calling for more shields and stuns, nor a removal (opens in new tab) of Kiriko’s Protection Suzu. Instead, Blizzard is tackling the problem directly and has said it will cut Roadhog’s ability to one-shot-kill enemies after hooking them in an upcoming patch.

These promised changes to Roadhog have been largely accepted by the community as a smart decision. If Roadhog is overtuned, then it makes sense to dial him and only him back. Blizzard hasn’t said anything about nerfing Sojourn again though, and the silence around her seems to have convinced the community’s loudest members that nerfing Mercy is the next best way to get what they want.

What’s frustratingly misunderstood about balance in Overwatch and competitive games in general is that ideal balance isn’t a finish line; it’s a constant race for the best version of fairness as player skill and sentiment change over time. The tastemakers of the Overwatch community have to acknowledge that most players don’t care all that much about balance or care about the state of the meta. I doubt the Mystery Heroes mains feel as strongly about balance as Top 500 competitive players do. Overwatch 2, contrary to what its most devoted players seem to think, isn’t made with only the top 1% who put in thousands of hours and talk about it online. And assuming so creates backwards conversations like this that obfuscate the actual issues with the game.

The conversation ignores the fact that Mercy wasn’t a problem until Sojourn came around because it’s not really about the health and balance of the game. It’s about the Overwatch community’s long-held bias against heroes that don’t fit an arbitrary definition of skill and the fraught cycle of discourse that emerges when a videogame becomes a 24-hour news cycle.