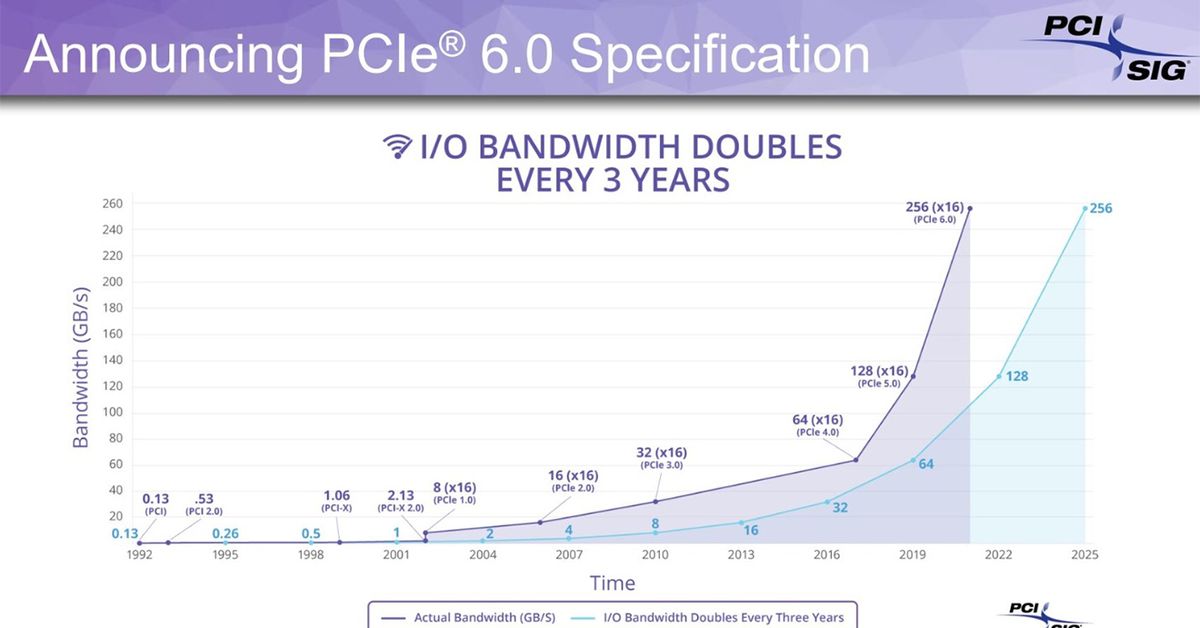 Home » PCIe 6.0 is coming for the SSDs and GPUs of the future
Game News

PCIe 6.0 is coming for the SSDs and GPUs of the future

PCI Express 5.0 is just getting started on the consumer side, but the specification for PCIe 6.0 has just been finalized. The PCI Special Interest Group has released the final specifications for PCIe 6.0, with bandwidth doubling from the 5.0 version to a theoretical maximum bi-directional speed of 256 GBps on a x16 slot (128 GBps in one direction).

The first super-fast PCIe 5.0 SSDs appeared just before this year’s Consumer Electronics Show and promised read speeds of up to 14GBps. That was already double what we’re used to seeing with PCIe 4.0 drives, and with PCIe 6.0 doubling, we expect SSDs to offer up to 28 GBps in the future.

The PCI Special Interest Group has doubled PCI Express speeds approximately every three years since the specification was originally introduced in 2003. PCIe 6.0 has revised the signaling technology to achieve the bandwidth gain this time, while maintaining low latency. It’s a move that Anandtech describes it as “a more major overhaul, arguably the largest in the history of the standard.”

The PCIe 6.0 architecture also maintains compatibility with all previous generations of PCIe. This will allow any existing hardware that uses previous specifications to work in PCIe 6.0 hosts, and it will certainly aid in the adoption and transition to this new specification.

While PCIe 5.0 is still in its infancy and being showcased with enterprise-grade SSDs, we shouldn’t expect PCIe 6.0 hardware in the next 12 to 18 months. That means some servers will likely start adopting the new spec sometime in 2023, with consumer hardware to follow in 2024 or 2025. Until then, get ready to hear a lot more about PCIe 5.0 SSDs, GPUs, and more in 2022.

PUBG 15.2 update makes the game free for all