The nefarious Nexto’s getting booted into touch. 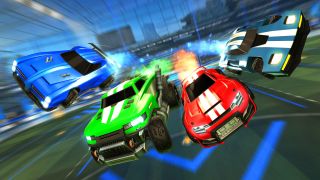 A few weeks ago we reported on a new trend in Rocket League: A bot that had been built for fun and learning, Nexto, had been reconfigured by bad actors and used in widespread cheating (opens in new tab). Player clips of the bots in action abound, and all show a preternatural command of the ball, as well as a suspicious tendency to stay on the ground most of the time.

At the time, Psyonix told us it was “actively investigating solutions” and now it looks like Nexto’s time is up. In an update posted to the Rocket League subreddit, the studio posted a statement (opens in new tab) acknowledging that this was “a very active topic” around the community, and what it’s done about it.

“Earlier today, we took action against a number of accounts running bots in Rocket League,” said Psyonix. “This banwave should cover the vast majority of accounts that have used bots since they first appeared in online matches towards the end of 2022, and we will continue to monitor for bots and take appropriate action against any players/accounts using them”.

It’s also added a “cheating” option to the usual reasons one can give for reporting another player, and says this is far from the end: “We are taking steps to introduce additional anti-cheat functionality into Rocket League. This is in-progress with the engineering teams, and we’ll share more on this once we’re closer to implementation”.

The studio adds that although it’s been “quiet” about the topic, it’s been investigating the bots since they first appeared in late 2022. “We are always going to be more deliberate on issues related to game security and competitive integrity, withholding comments until we are ready to take action,” Psyonix said.

The statement ends by reiterating Rocket League’s zero tolerance approach towards using bots in online play, and asking anyone “interested in working with Psyonix directly on anything bot-related” to make contact with the studio.

As we expressed last year, AI isn’t going away (opens in new tab). Psyonix may well have squished the Nexto bots well enough (though we’ll have to see how the next few days play out in the game for confirmation) but there will always be a next bot. They may turn out the next frontier of cheating, as well as the next step in creating great and more lifelike bots for good purposes. But for the moment at least, it looks like Rocket League players can relax. What a save!