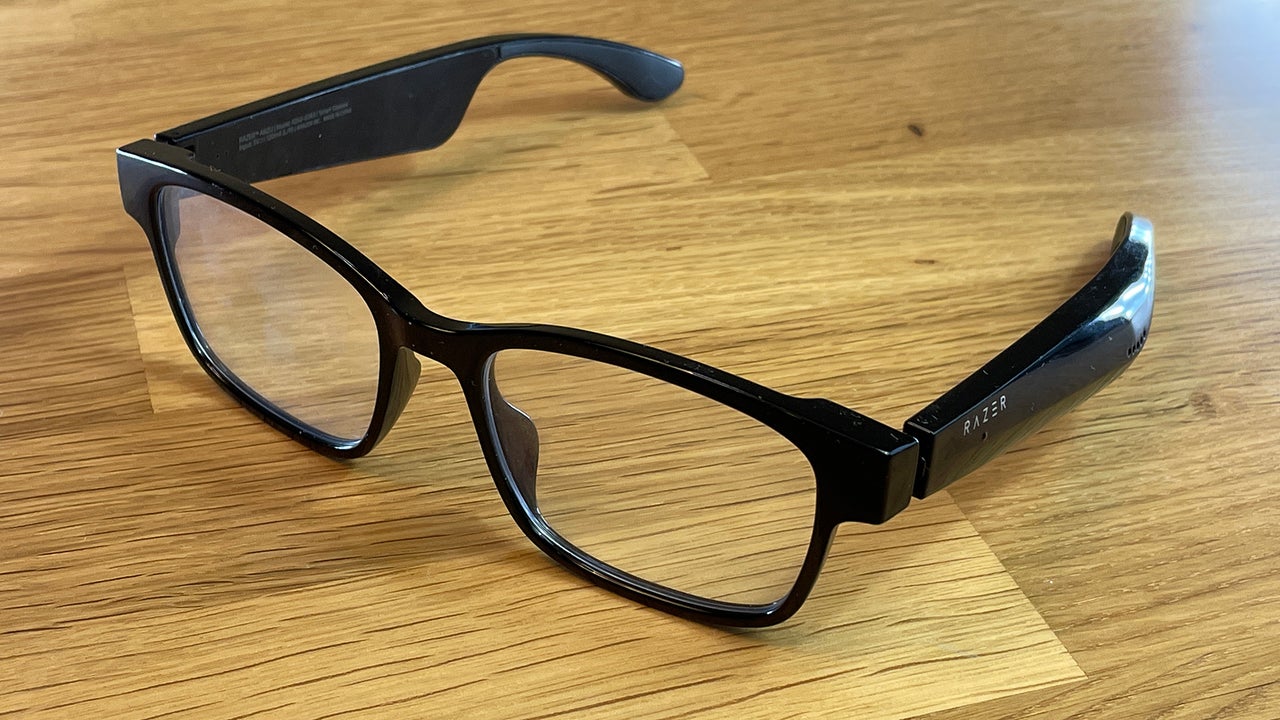 Razer’s Anzu Smart Glasses are extremely convenient. A hybrid of blue light blocking anti-glare glasses, sunglasses, and bluetooth headphones, Anzu is a one-stop for gaming and everyday lifestyle headwear. It’s not the absolute best at any one thing: the sound isn’t incredible and its clear anti-glare lenses don’t block as much blue light as bright orange gaming ones. Anzu has its advantages, though: for starters, it’s more comfortable and looks better than its competition on the gaming glasses front, the sound is good enough for casual play, and, obviously, it’s very versatile. With Anzu, chill vibes supersede high performance, and that’s what I’m looking for sometimes.

Unlike most gaming glasses, the Razer Anzu frames look like a generic pair of Ray-Ban-style sunglasses. Made of thick, black plastic, the frames are classically stylish and more comfortable than my metal Gunnar glasses. The rectangular Anzu frames – you can also get round ones – literally look like a larger clone of my Ray-Ban shades. I see their innocuous design as a big upgrade over most gaming eyewear I’ve used or seen. No one’s going to give you a funny look walking down the street because you’re wearing a piece of tech on your face the way they might if you wore Google Glass, or even a gaming headset.

Anzu is made for both indoor and outdoor use, and the glasses come with two sets of lenses. By default, they have a pair of clear blue-light blocking lenses to minimize the negative effects of staring at a screen all day. Anzu uses clear blue light blocking lenses, and are rated to block 35% of blue light. That’s the same amount you’d get from most clear gaming glasses, but it’s not as effective as more expensive models with bright orange lenses. On the other hand, between their comfortable fit and frames that look like normal glasses, I would be much more comfortable wearing these glasses on a video call or stream than a pair of bright orange Gunnars.

They also come with a pair of polarized sunglass lenses, which you can swap in at any time. You can literally push the lenses out and snap the new ones in. You want to be careful while doing it to avoid scratching the lenses going on the way in or out, so it’s not something you’d want to do while you’re out and about. Still, it only takes a couple of minutes to go from blue-blockers to shades, or vice versa.

The “smart” components of the Anzu are the speakers, which are built into the front section of the frames, just in front of your ears. The 16mm drivers pump out of the underside of the temples, so while you are playing your audio “out loud,” it’s going directly into your ears. Even at max volume, only people who are standing within a couple feet will hear anything, and even then, it will be a soft, illegible ambient noise.

Pairing the Razer Anzu is remarkably easy, even relative to your average Bluetooth device. All you need to do is open the hinges of the glasses, and they automatically enter pairing mode and become detectable on your devices. The glasses turn off and unpair when you close them, which helps stretch out battery life and forces your gaming PC or smartphone to switch to another audio option when they aren’t in use. It’s a very elegant, seamless experience that takes the last bit of hassle out of setting up Bluetooth headphones.

As someone who wears over-ear headphones all day, almost every day, there is something very freeing about mixing things up and using an open air audio device like Anzu. While noise cancelling is generally a boon for better listening and filtering out the stress of the world, I felt more relaxed than usual strolling through the grocery store with just glasses on. I wouldn’t say it’s better on a pure technical level – it definitely isn’t – but having the freedom to choose between chill glasses sound and focused headphone sound is luxurious, and that shouldn’t go overlooked at a time when small acts of self-care and relaxation can be a real comfort.

Near the speakers, on the underside of the temples, you’ll find two sets of copper contacts that magnetically connect to the Anzu’s bespoke two-pronged charging cable. It’s worth noting that the two speakers each have their own batteries: When you check the battery life in the Anzu mobile app, there are two battery meters. Having run through the battery a few times, I found that they’re almost universally in sync, so you aren’t going to run out of battery on one first. (Though that may change a couple years down the line as they independently lose the ability to hold a charge).

The Anzu gets pretty good battery life, but not quite as much as I’d like. According to Razer, the Anzu should run for “over five hours” on a single charge. That’s in line with similar devices like the Bose Frames (5.5 hours) and Flows smart glasses (5 hours). Anecdotally, I found that translated to just under a day, using them on and off at my computer and whenever I left the house. The glasses’ battery lasts longer than you’d expect, thanks to battery-saving shutoff after a few minutes of inactivity, and the fact that they automatically turn off when you fold the hinges. Still, the Anzu doesn’t quite have enough juice to replace a good pair of headphones or the primary audio solution to go with your PC. They’re equipped to handle short-medium length bursts like your commute, playing a game on your phone while waiting in line, or the occasional meeting. If you need audio all day, you’ll want to complement them with some Bluetooth headphones or a headset.

Anzu has a pair of omnidirectional microphones – purely for calls, from what I can tell – built into the front of the temples right behind the hinges. (They’re pretty small. You have to look close to see them). You can find them easily when pairing the sunglasses, though, as there are small indicator lights next to the mics. The call quality on the mics was, by all accounts, excellent. My family didn’t notice a difference in sound quality between when I took calls on Anzu, versus using the phone directly.

The sunglasses also have very subtle, somewhat finicky, touch-based onboard media controls. Using a set of quick taps and long presses, you can pause, skip back and forward, activate Siri or Google Assistant, and toggle the glasses’ low-latency gaming mode. The same controls also let you answer, hang up, and reject phone calls. Some of the inputs work every time, but a couple, including the basic tap to pause or pick up the phone, are fairly inconsistent. It can be hard to identify the exact spot on the glasses to press – there’s a small bump on the front of each temple marking the spot, but it’s shallow and easy to miss. Even when you know the spot, though, the glasses don’t always pick up the difference between the first of two or three taps and a single press.

Razer Anzu allows for some light configuration and customization through a dedicated mobile Anzu app on iOS and Android. The app, which automatically syncs with the glasses if they’re paired with your phone, allows you to swap from three EQ settings, reassign the onboard controls, and toggle the glasses’ low-latency “gaming” mode. The app works fine: All of these settings are easy to find and change. Given the basic nature of these features, though, you’ll rarely need to use it to adjust anything. There are no alternate options for the onboard controls, so you can move the inputs and functions around, but that’s it. And, by default, you can toggle gaming mode using the onboard controls.

That said, you’ll still open the app pretty often, because it’s the only way to check the Anzu’s battery life. Given that Anzu won’t last through a full day without a charge, it’s something you’ll want to keep an eye on. It’s a little annoying that there’s no external meter or way to prompt an audio version of the batteries’ levels, but there is a low battery warning so you won’t get caught completely off-guard if you forget to peep the app for too long.

As you might expect of a pair of sunglasses with Bluetooth speakers jammed inside, the Razer Anzu isn’t the pinnacle of audiophile technology. The sound quality is fine for casual listening and play, though the open-air delivery leads to you losing a lot of the fine details in music and sound effects. It also allows ambient sound to get in.

Anzu’s speakers work best when you’re listening to something with a single primary focus. When listening to podcasts or using it for phone calls, for example, I never felt like I lost any detail or that the sound quality was even slightly diminished.

When you switch to music, either on Spotify or in a game, parts of a song that are “in the background” tend to be softer, and don’t come through at low volume. If you’re working out or going to the store, you probably wouldn’t notice the difference, but there’s a noticeable gap in quality between listening with these and with a nice pair of over-ear headphones like my current go-tos, the Drop Pandas.

With a Bluetooth connection, audio lag is unavoidable, but the gap between your inputs and the music created by Anzu’s connection is fairly small. In most games with only passive audio like Spelltower on iOS and Dorfromantik on PC, I only noticed the lag when I actively looked for it.

The compromises are more severe in games where the music is more central to the experience, as the gap between my inputs and the audio responses impacted my play quite a bit. In Taito No Tatsujin Pop Tap Beat, the Apple Arcade-exclusive version of the longstanding Japanese drumming rhythm game, the delay between my taps and the sound of the Taiko drum made it impossible for me to keep rhythm. Likewise, in Call of Duty: Black Ops Cold War on PC, the gap between when bullets fire and when I heard them led to me getting killed a lot more than usual. I also had problems keeping track of footsteps and other, more subtle sounds.

Anzu comes with a low latency “gaming mode,” which Razer claims cuts down on audio lag, but I found that isn’t really the case. I noticed little to no difference in performance. Worse, there’s a noticeable decline in audio quality when you use it. The effect varies from game to game, but every game I tried across both iOS and PC sounded better with gaming mode off.

Razer Anzu smart glasses are available now for $199.99 at the Razer store‘ and Best Buy. The glasses come in two styles, square and round frames, and two sizes, small and large. For reference, the photos in this review feature the large, rectangular frames.

Prescription lenses for the Anzu are available through eyeglass lens replacement service Lensabl, for which Razer offers a 15 percent discount coupon. Based on the Lensabl website, prescription blue-light lenses cost $97. Polarized prescription sunglasses lenses cost $177-$217, depending on style. (These prices do not factor in the coupon).

Fortnite: How to get the Transforming Neymar Jr....