This monster PC case could be the most extra chassis ever 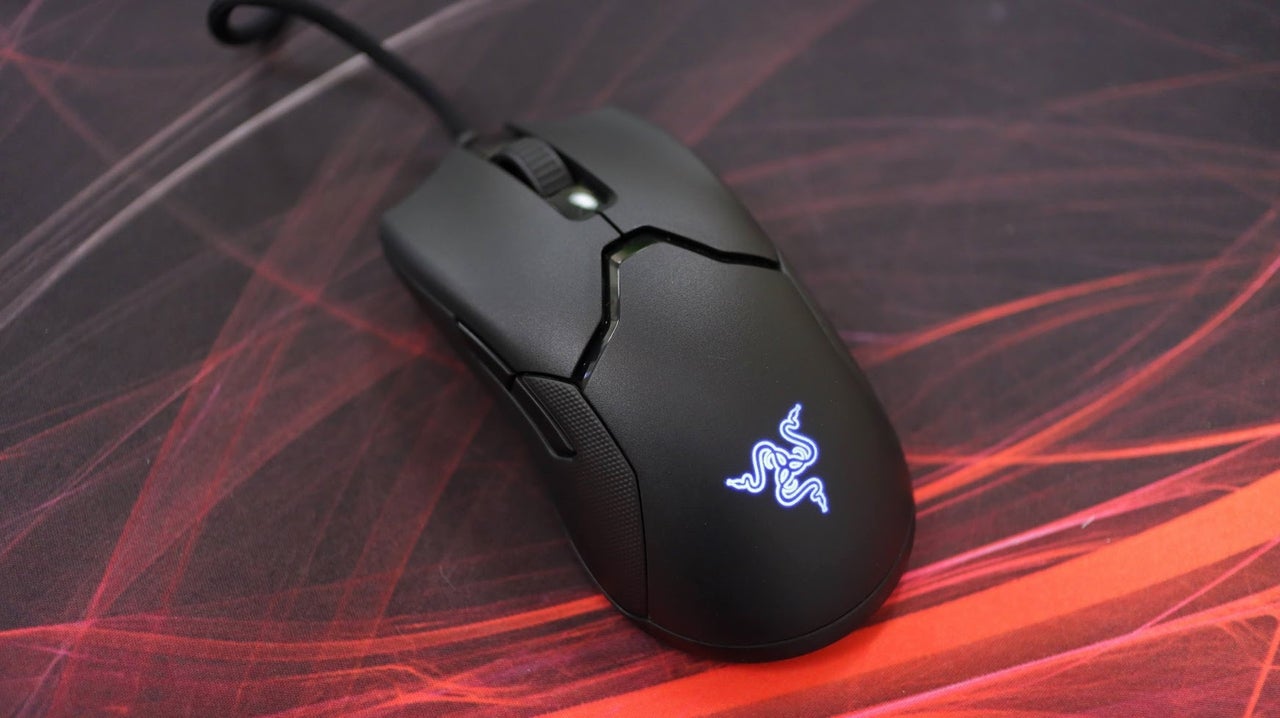 The Razer Viper 8K feels familiar. In fact, in look and feel, it’s the same gaming mouse as the original Razer Viper. But make no mistake, the Viper 8K is at the cutting edge of gaming mice today. Featuring Razer’s top of the line Focus+ sensor, optical triggers, and an incredible 8,000 Hz polling rate, the Viper has the gaming rigs of the future squarely in its sights. But is it worth upgrading to in the present?

The Razer Viper 8K feels like an old friend — and it should. There are virtually no differences between the original Razer Viper and the Viper 8K I’m reviewing today. That’s a very good thing, as the original Razer Viper is one of my favorite mice ever. It’s also good because the original Viper is being phased out and replaced with this upgraded version at no extra cost. It’s a medium-sized ultralight mouse (71 grams) that works well whether you’re a palm, claw, or fingertip gripped gamer. That versatility even extends to being a righty or lefty thanks to its 8-button ambidextrous design.

Since the launch of the original in 2019, I’ve owned every version of the Razer Viper and some version has lived on my desk ever since. The full-size Viper mice are easy to shift between, including the new 8K, because the hallmarks of the series are the same: the low contour of the shell and slight texturing of the plastic feels great in the hand; the rubber side grips keep them from slipping even on hot summer days; the optical switches are fast, reliable, and satisfying (if a bit softer than the likes of the Logitech G502); and the tracking feels pixel perfect. The Viper 8K carries on every bit of this and improves upon the internals.

Under the hood, the Viper 8K has been upgraded with Razer’s latest Focus+ sensor. On paper, it’s a substantial bump in performance. The DPI has been boosted from 16K to 20K, the max speed has increased to 650 inches per second, and a quoted “industry best” accuracy of 99.6%. In practice, these upgrades won’t mean much to the average gamer (I couldn’t really feel them) but just might to competitive esports pros or those looking to break into the scene. This sensor also features Razer’s Motion Sync technology, which aligns the pulse of the mouse’s polling rate with the pace the host PC seeks updates to increase accuracy.

Like every Viper gaming mouse released so far, it comes equipped with Razer’s in-house optical switches. Rather than rely on mechanical contacts, the Viper 8K uses beams of infrared light to recognize button presses. This allows for near-instantaneous triggers without the need for debounce delay to smooth out electrical interference caused by mechanical contacts. Razer quotes this as “three times as fast” but in real-world tests against my trusty Logitech G502 or Ducky Feather, they felt equally responsive.

What matters more is that by their very design these switches are more resilient to wear and tear. Since there are no mechanical contacts, common pain points like the dreaded double-click issue that plagues dying gaming mice should never come into play. That translates to an expected 70 million click lifespan, which is a large improvement over the 50 million expected from many flagship mechanical-switch gaming mice.

Razer has also made two other small improvements. The first is that the Viper 8K glides much better than the original thanks to its new 100% PTFE mouse feet. The second is that the buttons on either side are now more flush with the rest of the shell and harder to hit by mistake. That was a constant aggravation on the original, so it’s a big plus to see that improved here. These two changes might not seem like much but they’re solid upgrades to day-to-day use and make the whole mouse nicer to use.

The big upgrade here is right in the name: the 8K, or 8,000Hz, polling rate. The vast majority of gaming peripherals still operate at 1,000Hz, so to say Razer upped the ante here is an understatement. Polling rate, measured in Hz, is how often the mouse communicates its position to the PC every second. In that context, even 1,000Hz seems like a lot, but as gaming monitors push to higher and higher refresh rates, issues like microstutter can occur as refresh rate and polling rate begin to diverge. This picture (created by Razer), demonstrates the issue well:

Increasing the polling rate decreases the distance between a mouse update and screen refresh.

It makes sense — in theory. The Viper 8K reports its position 8,000 times a second. But there’s an important link here between your monitor’s refresh rate and whether a higher polling rate will even matter. Unless you’re running a 144Hz monitor, and maybe not even then, you aren’t likely to notice any difference whatsoever. Likewise, trying to run such a high polling rate actually has a noticeable impact on CPU usage, which is probably why this was the first mouse I’ve ever reviewed where the manufacturer sent me recommended system requirements:

The reason for this is because of CPU use, it’s possible that 8K could actually lower your in-game FPS if you’re running an processor or graphics card.

That said, the Viper 8K also supports lower polling rates too, from 4K all the way down to 125Hz. Since it’s replacing the original at the same price, it’s entirely reasonable to view 8K as a side-benefit to take advantage of down the line if your system can’t yet support it. This can be easily changed inside Razer’s Synapse software, which is also where you’ll control the palm lighting and programming custom keymaps.

For all of the subtle but important upgrades the Viper 8K brings, there is one important downgrade and that’s in the Speedflex cable. Compared to other Vipers, I find it slightly stiffer and that it has more bend memory from packaging. It’s still an improvement from normal cables and has reduced drag with the Speedflex weave, but the wiring to support 8K appears to be slightly more resistant than past models. It’s not a big deal but definitely noticeable if you’ve used another Speedflex-equipped Razer mouse.

I have to admit to being a bit skeptical of the 8,000Hz polling rate. Reporting 1,000 times a second for a 1,000Hz mouse already felt fast but eight thousand? That struck me as well into the land of diminishing returns, but I went into this review with an open mind. My system meets the specifications (Ryzen 3950X, RTX 3090), I use a 144Hz gaming monitor, and I was ready to see if the mouse helped my gameplay or felt more responsive.

The first thing I’ll say is that the Viper 8K does offer a better gameplay experience than the original Razer Viper. The PTFE mouse feet made a huge impact on how smoothly the mouse glided across my mouse pad. I swapped between the hard-surface Razer Firefly and the Razer Gigantus mouse pad. The Viper 8K is fast. The extra two grams in weight really didn’t make any difference at all, and the new Focus+ sensor tracked accurately without needing to re-calibrate in the software thanks to its Smart Tracking technology.

The improved side buttons also prevented misclicks, which was a regular problem of mine when I would grip the mouse in tense shootouts in Call of Duty: Warzone. I also really liked the added tension when scrolling between notches on the scroll wheel. There’s nothing quite so frustrating as bumping a sensitive scroll wheel mid firefight and swapping to your sidearm by mistake. Not here. Scroll steps are always going to be intentional.

Like the Vipers before it, I also found it to be extremely accurate and responsive under my fingers. The mouse clicks respond instantly. The improvements to the sensor are welcome but overkill for a casual shooter fan like myself. Still, the tracking felt pixel perfect. Whether I was playing Doom Eternal or Warzone, if I messed up a shot, it was because I messed it up, not the mouse.

The most important feature, the 8kHz polling rate, is tougher to evaluate. There were times I thought it felt more smooth, especially in quick turns, but I really can’t say if that’s because I expected it to be or because there was actually something there. I tried the mouse in a wide variety of games — Apex Legends, Warzone, Rainbow Six: Siege, Valorant, Fortnite, Doom, Destiny 2 — and I can’t say conclusively I felt any improvement at all.

In fact, trying to run at 8K even caused some problems in Apex Legends. When making fast turns, my game would sometimes stutter like it was trying to catch up in frames. Considering the specs of my gaming PC, it shouldn’t be a hardware limitation. In my search for an answer, I came across reports from other gamers experiencing the same but the only consistent factor between them seemed to be that turning down the polling rate fixed the problem. In my case, dropping to 2,000Hz fixed the issue. I wasn’t as bad off as some, but clearly even high-end systems can experience issues.

With all this in mind, 8K strikes me as a very forward thinking technology. Not all games or systems are ready for it and only very high refresh rate monitors are likely to see a big boost in performance. In my reading, I came across a number of gamers who claimed they could feel a noticeable improvement at 240 and 360Hz. I can’t say the same, but I’ve also never found microstuttering to be an issue at 144Hz. If you have, this mouse might be the answer.

The Razer Viper 8K retails for and it’s available from Amazon and direct from Razer.

Free hearts across Japan with the Phantom Thieves in Persona 5 Strikers, out next week on PS4 – PlayStation.Blog

Curse of the Dead Gods Review