The RTX 3070 performance is just about what you’d expect, but what if Nvidia also matches RTX 3070 pricing? 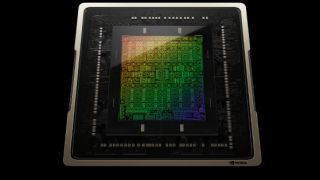 The rumour mill is kicking into high gear for the next next-gen graphics card from Nvidia, but somewhat bizarrely that’s not the RTX 4070. Instead, following on from the RTX 4070 Ti (opens in new tab) released at the start of January, you’d maybe expect the noise out in the twittersphere to be all about the next card launching on the same GPU.

But no, what we’ve actually got is regular Twitter snooper @kopite7kimi (opens in new tab) with their own rolling ‘leaks’ about the inevitable RTX 4060 Ti graphics card launching… well, some time later this year.

Some folks have spoken about a Computex reveal, which feels like a good frame to me, but that sure feels a long way off in a cold January.

Following on from an initial leak in mid December last year—stating the card would be based on an AD106 GPU, with 4,352 cores, 8GB GDDR6 memory, 32MB of L2 cache, and a 220W TGP—they have revised down those power demands. The figure now being bandied around is 160W, which makes it around 80% of the total graphics power of the 200W RTX 3060 Ti (opens in new tab) and the RTX 3070 (opens in new tab) cards of the last generation.

We’ve spoken about our fears for the previous specs (opens in new tab) before, mostly around the fact the GPU itself looks so much weaker in raw shader terms compared with the RTX 3060 Ti. The fact that it would still likely outperform it is almost a given seeing the frame rates on offer with the previous RTX 40-series cards, but there is a feeling Nvidia has cut this GPU to the bone.

Still, outperforming the RTX 3060 Ti with a 160W TGP highlights the efficiency of the Ada architecture. Now, @kopite7kimi is claiming that the RTX 4060 Ti is going to match the RTX 3070 of the last generation in terms of performance, which seems… fine.

That’s surely the minimum target for a new GPU; performing at least at the same level as the card one tier above. It makes the RTX 4060 Ti minimally effective, if largely unexciting. The fear, however, is going to be just how much Nvidia is willing to price the mid-range card at.

The RTX 3060 Ti was a $399 card at launch, and you’d hope the RTX 4060 Ti would match it. That’s the logical view. The pessimistic realist in my though can’t help but worry over the likelihood of the mainstream Ada card getting itself a $500 sticker price.