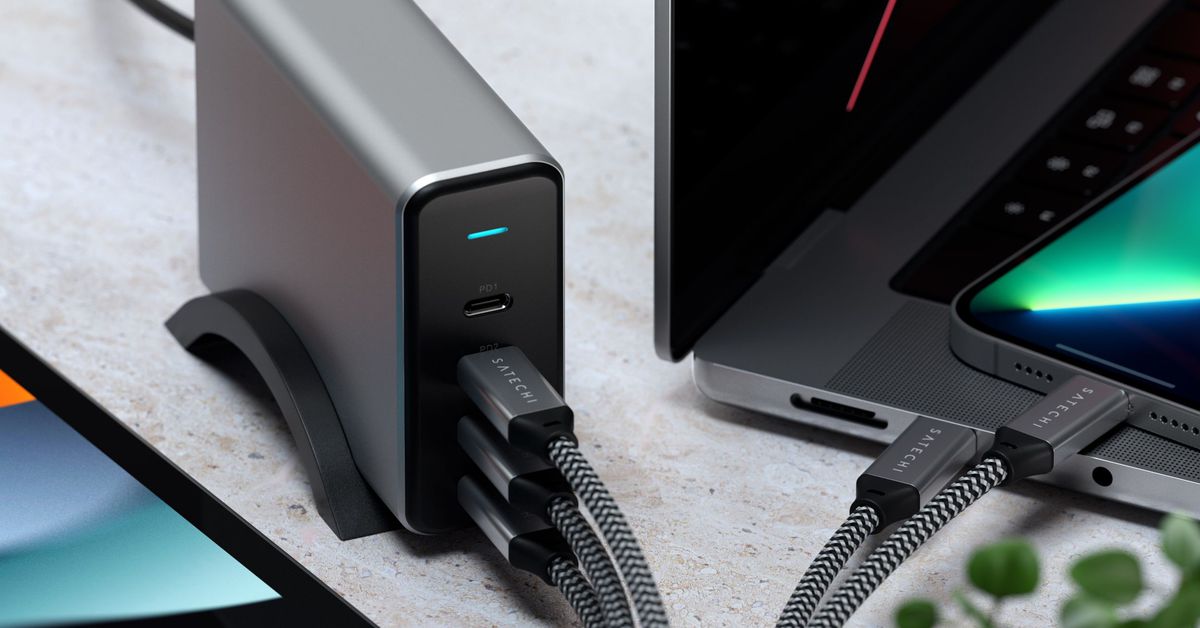 Satechi has announced a charger with some interesting specs: it has four USB-C ports that can deliver 165 watts simultaneously, and it will retail for $120. It’s capable of pumping 100W of power for a single device and can even do that while charging one or two other devices depending on how much power they consume.

That’s impressive, considering the 120W Anker brick we wrote about last month (which also had four ports) wasn’t able to do the same – it could only charge with a 60W/30W/20W split, where the Satechi 100W / 30W / 30W. It can also power two devices at 60W and give the third 45W if you’re more into charging a few lighter computers at once — perhaps a 13-inch MacBook Pro, a Chromebook, and a MacBook Air.

However, that 100W charging will disappear if you plug in four devices – from there it will drop to 60W/45W/30W/30W. Still, that’s not bad for a device that’s spec sheet says 12 ounces (or about 340 grams) weighs. If you’re someone who carries a lot of USB-C devices with you when traveling, the Satechi can be a good way to charge them all at once without having to juggle multiple bricks and outlets.

All that juice is great and all, but my favorite feature has to be the little kickstand that comes with it to hold it upright on a desk. Not only would it make the charger easier to use as a home charging station, but it also looks like a cute little robot (at least in my eyes). It can also help with tedious things like cable management by keeping the detachable charging cable away from the up to four USB-C cables that come out on the front.

The charger can be pre-ordered on the Satechi website for $120, but the company says you can get a 20 percent discount through January 13 by using the code “CES20,” dropping the price to $96 excluding any applicable taxes and fees. shipping costs. According to the product page, the US version will ship on January 14.

If you don’t need that much power and carrying capacity, Satechi sells a 66W charger with three USB-C ports for $55. Anker also announced a $79 100W charger with two USB-C ports at CES and one USB-A port, claiming it will be the world’s smallest 100W gallium nitride wall charger.