Step outside your comfort zone. 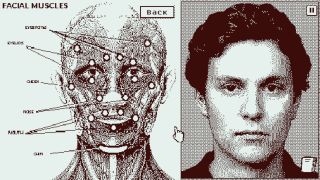 We are living through a golden age of videogame horror. 2022 saw the indie scares ramp up, and 2023 is poised to pick up the pace even more, promising to be a landmark year (opens in new tab) for big-budget horror. The deluge of unsettling and sometimes downright terrifying misadventures seems to be unstoppable. But for all their grotesque monstrosities and various manifestations of trauma hovering over their troubled protagonists, most of these games are instantly classifiable, beholden to a rigid set of tropes and genre conventions.

Despite its unusual perspective and distinctive melancholy mood, the breakaway indie hit of 2022, Signalis (opens in new tab), was marketed as a “classic survival-horror experience”. The Excavation of Hob’s Barrow (opens in new tab), meanwhile, merges a rarely-mined source of inspiration—cinematic folk horror—with the recognisable trappings of a typical point-and-click adventure game. The shock of the new is tempered with the comfort of the familiar.

This is not necessarily a criticism. Many memorable games have emerged from this delicate balancing act. But horror thrives on uncertainty, its impact enhanced when you’re not quite sure what to expect or how to react to it. Α glowing enemy weak-spot, a clearly designated safe room—these are the kind of well-worn conventions that serve to deflate players’ anxiety when faced with the unknown. Little wonder, then, that some of the more unsettling experiences of this recent horror wave eschew long-held traditions in order to restore precisely that vulnerability, a mood of disoriented unease.

Not that making an unclassifiable horror game inherently excludes you from citing a celebrated classic as an influence. Take last year’s Endoparasitic (opens in new tab), whose debt to Resident Evil is evident in its fiddly inventory and slowly depleting resources, as you make your way through the labs and offices of an evacuated research facility, fighting off bloodthirsty mutants or evading them to the best of your ability after your ammo has run out.

A single arm attached to your haemorrhaging torso provides the only means of locomotion.

Another branch of its lineage is more surprising. You start your gruelling trek after being dismembered by a host of creatures that have infested the asteroid-bound lab. A single arm attached to your haemorrhaging torso provides the only means of locomotion, which entails clasping the ground ahead and clumsily hauling yourself forward by the use of your remaining limb.

As a result, your balance and orientation are all askew, as the right arm predictably favours one side of the body; you have difficulty aiming at threats beyond a narrow arc ahead; and reloading weapons becomes a lethally time-consuming and error-prone process. The sheer unwieldiness of actions that, in more straightforward games, are summarily executed via a single button press or nudge of the controller, brings Endoparasitic closer to an experimental oddity like QWOP (opens in new tab) than conventional survival horror but, at the same time, reinforces the sense of helplessness. Comedic and panic-inducing in equal measure, the awkwardness makes for a unique experience and some highly tense moments as the monsters advance while you laboriously remove each used-up shell from your shotgun individually, then manually grab new ones from your inventory to reload.

Speaking of unusual control schemes, Who’s Lila? (opens in new tab)—arguably 2022’s weirdest horror title—tasks you with manipulating not arms or legs but 17 individual facial muscles. William, the high-school student you play as, describes his plight early on: “I have to make a conscious decision each time I move a muscle”. But William’s main problem is not so much an inability to channel his emotions; it’s that a sinister entity called Lila, a separate consciousness vying for control of his actions, occasionally takes over and cannot help broadcasting her murderous intentions to the rest of the world. Cue plenty of misunderstandings and quizzical looks when, for example, the news of a classmate’s disappearance whispered among a group of friends is met with a beaming smile by yours truly.

A high-school drama given the David Lynch treatment, your main task is to force the kind of expression on William’s face that will disguise your inner turmoil as nostrils flare, lips quiver, and eyes narrow to betray Lila’s malicious influence. It’s reminiscent of World of Horror (opens in new tab), not just in its use of a monochrome palette but in the way it plays out in short vignettes gradually revealing more of that twisted universe. With each playthrough fresh information becomes available, new locations unlock, and Garage Heathen’s deeply unnerving game acquires the troublesome implications that come with plumbing the depths of darkness that lie under an innocent façade.

Other than idiosyncratic controls and bizarre concepts, another avenue to developing unconventional horror games is via subverting a popular genre. Walking simulators have been ubiquitous in the last decade and have produced some of horror’s most memorable stories in SOMA (opens in new tab) and What Remains of Edith Finch (opens in new tab). But with Titanic 2 – Orchestra for Dying at Sea (opens in new tab), indie developer flan has adopted the measured pace and combat-free exploration that typify the genre to come up with what could accurately (if inelegantly) be described as a floating-through-the-abyss-while-asphyxiating-and-hallucinating sim.

It’s reassuring to see the field’s borders expand to embrace games that are less easy to define: the weird, the unclassifiable, the obscure.

A fever-dream dive into the depths—alongside the sinking ocean liner—Titanic 2 is, at the same time, eerily tranquil and profoundly unsettling. Various clues, not least a rendition (opens in new tab) of Celine Dion’s famous anthem caught in a maelstrom of industrial noise, suggest that your unseen protagonist is, in fact, Leonardo DiCaprio’s doomed artist, Jack Dawson. Whether the vivid images of giant sea monsters and the alien tongues reverberating in his head are real or illusions desperately conjured by a dying mind remains tantalisingly open to interpretation.

It’s reassuring to see the field’s borders expand to embrace games that are less easy to define: the weird, the unclassifiable, the obscure. And with several upcoming releases that refuse to be contained within the usual categories—the grim dissections of Autopsy Simulator (opens in new tab), the online hell of Darkweb Streamer (opens in new tab), the cursed mazes of They Speak from the Abyss (opens in new tab)—connoisseurs of the bizarre can rest easy knowing there’s more to videogame horror than zombies, abandoned mansions, and Lovecraftian first-person shooters.