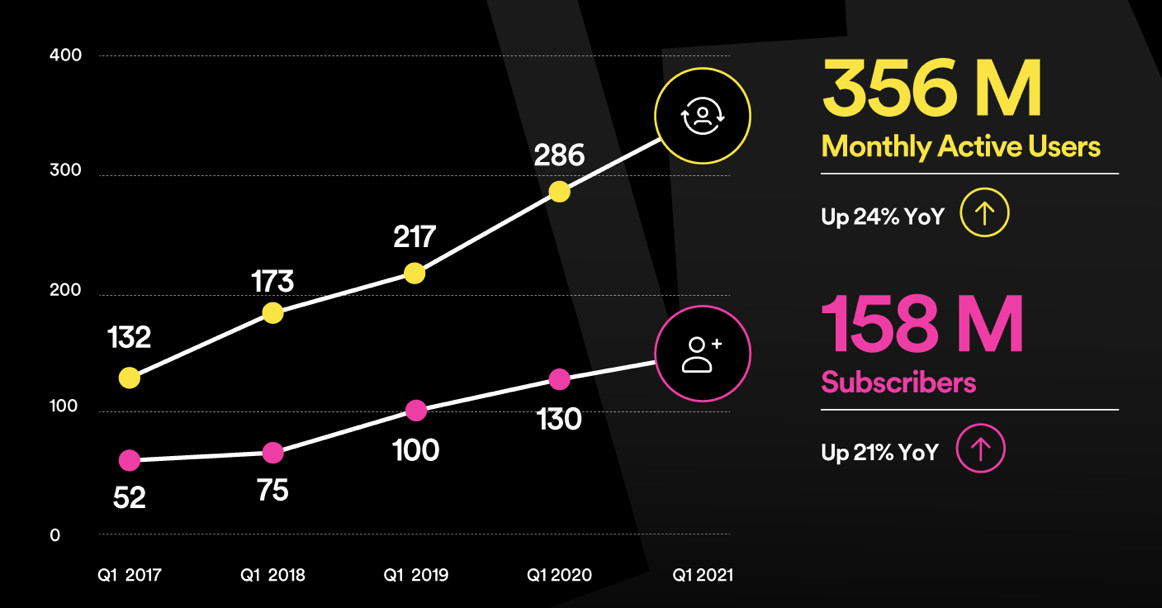 The streaming service has continued to focus on podcasts both as a way to convert free listeners to premium subscribers, and as a way to generate ad revenue. Spotify said that ad-supported revenue outperformed its forecast thanks in part to its podcasting efforts. In particular, the company said the Joe Rogan Experience, which it now exclusively licenses, “performed above expectations.”

Just yesterday Spotify announced the launch of podcast subscriptions. However, it’s only rolling them out for select partners at the moment and has said podcasters won’t have to pay it for the service for the first two years, meaning we’re unlikely to see it generating any extra revenue for Spotify until 2023.

It’s a similar story with the company’s Car Thing music player which is only getting a limited launch for now, and which the company is currently giving away rather than selling.

Today’s release follows Spotify’s announcement that it will soon be increasing prices for its family plan in the US and Duo, Student, and Family plans in the UK and some European countries. Today’s numbers give a possible reason for the increases: Spotify’s falling average revenue per subscriber. Spotify says it earned an average of €4.12 (around $4.97) per premium subscriber. That’s a decrease of 7 percent compared to the same period the previous year. Within Spotify’s premium business, average revenue per user has declined for five out of the six previous quarters due to Spotify using discounted plans to attract subscribers in new markets like Russia and India, according to the WSJ.

Spotify consistently cites “product mix” as the reason for this decline, suggesting that more of its users are opting for cheaper subscription bundles. Increasing the price of these bundles could help slow the trend. Today’s earnings release only covers the period up until the end of March, so we won’t see any impact of this week’s price increases until next quarter, if that. But Spotify reports that the increases have shown no “material impacts” on cancellation rates.

Amidst these price increases, Spotify is also attempting to push back against criticism that it doesn’t pay artists enough to stream their music. Last month it launched a new website called Loud & Clear where it attempted to offer more transparency about its payments.

Overall, Spotify made a profit of €23 million, up from €1 million a year before, The Wall Street Journal reports.

Perhaps the biggest change to Spotify’s core music streaming business is due to arrive later this year when it launches its HiFi lossless streaming tier. The service promises it “will deliver music in CD-quality, lossless audio format to your device and Spotify Connect-enabled speakers” in the “select markets” where it’s launching. Pricing for the new subscription tier is yet to be announced.