Google introducing a feature in Chrome 90 to create links to highlighted text on...

Amazon has reportedly canceled its Lord of the Rings MMO game 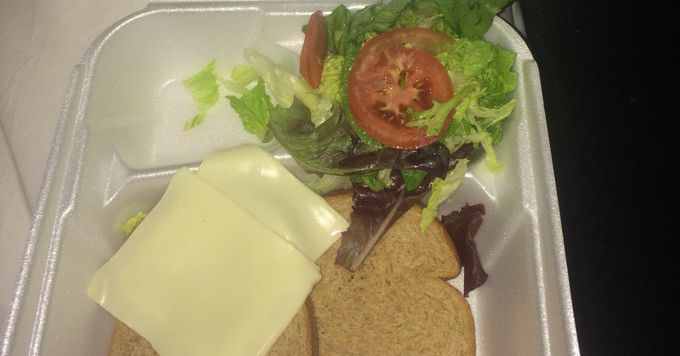 
Trevor DeHaas is auctioning his 2017 tweet of the “dinner” he received at Fyre Fest as an NFT. But unlike the Fest itself, the tweeted photo of the limp cheese slice on wheat bread with some greens and a sad tomato in a styrofoam container isn’t a grift; as first reported by Axios, DeHaas is hoping to raise $80,000 which he plans to put toward his medical bills.

The organizers of Fyre Fest billed it as an exclusive, luxury music festival in the Bahamas, which would include top-notch catering, big-name performers, and transportation via Jet Ski and yacht. Kendall Jenner was among the celebrities paid $250,000 to promote the event, which guests paid up to $12,000 to attend.

That is not what happened, however.

Social posts from attendees like DeHaas showed images of a poorly organized, subpar event that wasn’t close to what was advertised, and soon the lawsuits began. In 2018, Fyre Fest organizer Billy McFarland was sentenced to six years in prison after pleading guilty to wire fraud charges.

DeHaas told Axios that he was inspired by Twitter CEO Jack Dorsey’s auction of his first-ever tweet, which sold for $2.9 million on March 22nd. “Now, a few weeks before the 4 year anniversary of the festival (4/28) I’m selling the most iconic cheese sandwich on the blockchain along with the ownership of copyright,” he said.

DeHaas clarified on Twitter that he was selling the tweet on flipkick.io, a New York-based company for artists and musicians to “monetize their work with Physical NFTs,” according to its website. Ironic twist: Fyre Fest co-organizer Ja Rule is a partner in Flipkick, but DeHaas says the musician is not directly involved in the auction of his cheese sandwich tweet. However, Ja Rule, who was cleared of wrongdoing in connection with Fyre Fest, recently sold an NFT of a painting of the Fyre Fest logo for $122,000.

DeHaas says he plans to transfer copyright and ownership rights for the NFT to the auction winner. His aim is to raise money for his medical expenses; according to his GoFundMe page, DeHaas is in end-stage renal disease and needs a kidney transplant.

Which raises a troubling question: are NFT auctions going to become another tool — like GoFundMe pages — to raise money for costs not covered in America’s abysmal health care system? If something good comes out of the debacle that was Fyre Fest (other than the dueling documentaries on Hulu and Netflix), that’s certainly a win. But using NFTs to pay for surgery and treatment introduces an even bleaker scenario for people desperate to pay their medical bills who aren’t Walter White or independently wealthy.

Google introducing a feature in Chrome 90 to...

Amazon has reportedly canceled its Lord of the...