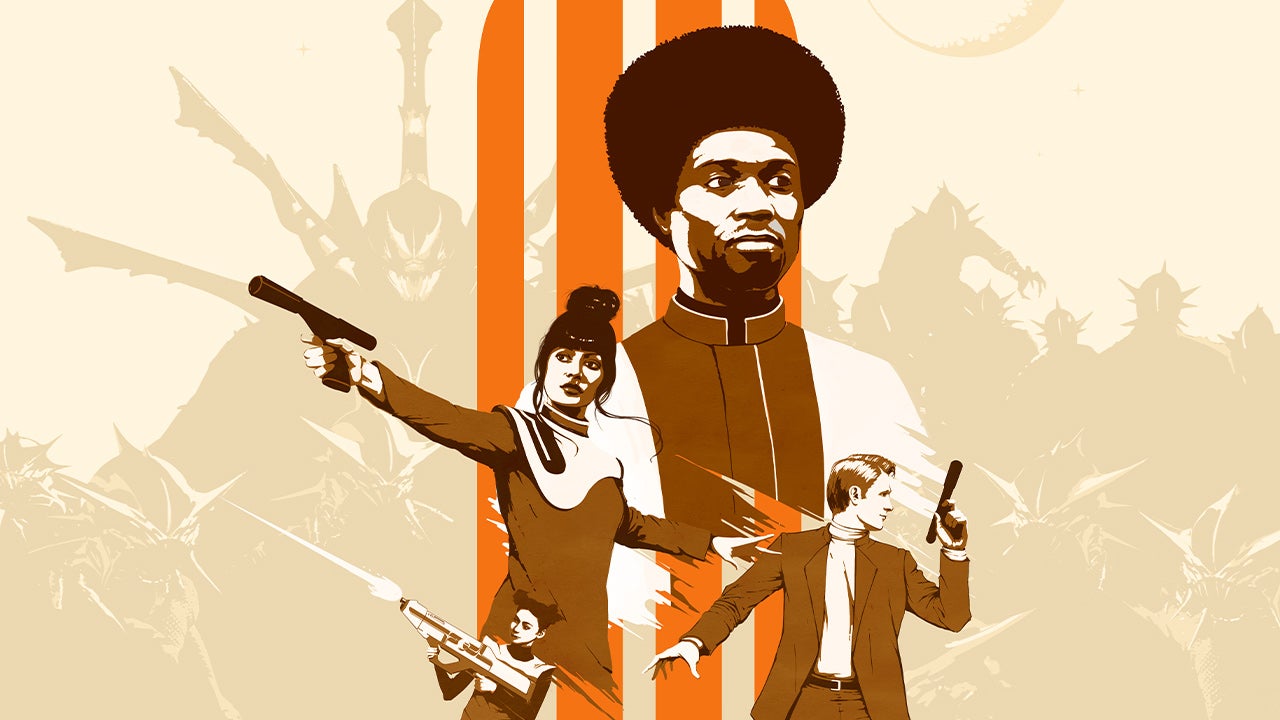 The Anacrusis rightly believes that co-op shooters desperately need a new flavor. Nearly every game that follows in the footsteps of Left 4 Dead places four players in a desolate zombie apocalypse and asks them to plot an escape route before succumbing to the horde. The gloom can become overbearing; does teamwork really have to be this dark? The Anacrusis refutes that idea with bright pastels and a beefy Jetsons-inspired verve, which stray delightfully from the broken cities in Back 4 Blood or the depths of hell in GTFO or Call of Duty’s Zombies modes. Unfortunately, The Anacrusis is unable to generate the crucial muscle tone that makes a co-op experience unforgettable. In fact, after playing the three episodes available in the early access version of The Anacrusis, I think the only new idea it brings to the genre is a fresh coat of paint.

You and your friends embark on a slick, tangerine-colored spaceship adrift in psychedelic space. Guns and ammunition are scattered throughout the safe room – all shrouded in a porcelain 1960s sci-fi aesthetic – and together you’ll try to fend off a massive incursion of possessed, Cthulhu-headed crewmen who march through the corridors between you and the next checkpoint. It’s not hard to understand exactly where The Anacrusis gets its main inspiration: Chet Faliszek, co-founder of developer Stray Bombay, logged time on both Left 4 Dead and Left 4 Dead 2 while he was with Valve, and despite the vast differences in tone and setting, The Anacrusis still has you hacking down thousands of twittering zombie facsimiles before closing the swarm behind a magically impenetrable door.

The goal, I think, is for you to survive through the skin of your teeth; to wipe the sweat from your brow after your party sparks another unlikely breakout. Instead, I felt an annoying feeling of malaise before I even completed the first level. For whatever reason, Stray Bombay turns all his cards face up from the start so there are no surprises for later. The aliens I fended off in the first few minutes had the same shape and strategy as those found in the arctic stages at the end of the game. Meanwhile, there are only three basic weapons, and each of them feels almost identical to and lacks the same kinetic, meaty feedback you’ll find in, say, Back 4 Blood. I’m pretty sure the only difference between the Plasma Rifle and the SMG is a slightly slower firing cadence on the former. By the second episode, I didn’t care at all about which weapon I had equipped, as they were all equally effective at dealing with any threat, big or small.

I didn’t care anymore which weapon I had equipped because they all felt equally effective.

The crowd appears, absorbs a ton of bullets and disappears. There are a few named special Infected-style villains to increase the constant churn: the Gooper can wrap you in a crippling green slime, the Flasher fills the screen with a corneal-destroying flashbang effect, and the Brute hits hard and costs a lot of bullets . They demand a rudimentary dose of coordination from your friends, but my party rarely felt threatened. For the most part, everyone held down the trigger button until the win was achieved. In fact, despite The Anacrusis’s customizable difficulty levels that dynamically scale with the party’s performance, it’s only served me on two encounters where I was truly terrified of a wipe, and unsurprisingly those were the only instances where it was. really gripped my nervous system.

To be clear, some of the best co-op games of all time enjoy sublime brainlessness (think the early Serious Sams). Faliszek has said in interviews that he wants The Anacrusis to be a game we can hanging out indoors – treating it as passive entertainment, akin to talking through a movie. But I think that philosophy dampened the drama of The Anacrusis. There is never a harsh punishment for death; if a party member goes down, they can be quickly revived, and besides that, they can always be recalled from the void, in full health, after a brief cool down. That robs it of some of the suspense that made Left 4 Dead so successful – the way it forced its parties into a constant state of despair created magical moments where you step into the rescue helicopter knowing you couldn’t have lasted a second longer. As it stands, The Anacrusis can’t quite bring up that key element, and that gives it a strangely lifeless feel.

The setting is a great idea, and yet this spaceship is chronically barren.

I blame much of the emptiness on The Anacrusis’ environmental design, which is frustratingly bland across the board. This is such an incredible backdrop: the Summer of Love in the dark reaches of the galaxy? A soundtrack etched with Isaac Hayes-esque guitar scratches? It’s a great idea, and yet this spaceship is chronically barren. In the first hour of gameplay, I found myself in a huge winding shopping center, and loved getting a glimpse of how the inhabitants of this trippy dystopia lived… but as I navigated the corridors and shops, I found no taste text or artistic flourishes to ground me in this world. The atmosphere is paper thin. Hell, it wasn’t even clear what was being bought and sold in all those identical standard boutiques.

The Anacrusis is light on traditional storytelling (each episode starts with a short cutscene and that’s about it), and that’s a great approach to take, but it doesn’t even bother letting us in an acquaintance. stumble that transforms this technicolor shooting gallery into a recognizable, contextual universe. I quickly became exhausted from breaking doors open to find yet another grenade store, rather than a spate of tales of the environment that left the slightest sense of what went wrong here. The summary screen at the end of the first episode told my party that we had killed over 4,000 aliens, but I still had no idea who they were, who we were, or why we were here in the first place.

A slightly different alien composition didn’t change the overwhelming dryness of the action.

While the early access launch is decidedly lacking in substance, with only three levels to play in an evening, Stray Bombay highlighted The Anacrusis’s replayability as a strong point. To that end, it borrows the “director” concept from the Left 4 Dead games – an invisible AI orchestrator that works behind the scenes to change the types of items the party finds in their campaigns, as well as the size and composition of enemy encounters. based on your skill level, to keep you on your toes. It’s true that the exact setup of the encounters varies between each playthrough, but I found the firefight to be repetitive enough that a slightly different alien composition didn’t change the overwhelming dryness of the action.

There’s also a slight roguelite advancement device in each episode, in that you can find upgrade stations around the ship that offer mild bonuses to your ammo stash, damage output, and revival speed. But these straightforward stat boosts just aren’t enough to open up new play styles, meaningfully differentiate your character from the rest of the party in how you play, or even change your approach from your previous run. I found myself wishing Stray Bombay would embrace a class-based arrangement, where everyone I dungeoned with had their own gear and role to play. That alone would lessen the toil of The Anacrusis; I could at least experience the struggle from multiple perspectives.

I should mention there’s a switch in the main menu that ostensibly equips character and weapon skins (I’m guessing they’re acquired in the levels or through some sort of in-game currency), but I was never rewarded with any cosmetics or cash. I imagine that job posting has something to do with the ‘SEASON’ tab in the top bar, which leads to a blank page with the words ‘Coming soon’. The ambitions of the Anacrusis are high, but honestly the biggest problem is that after completing my first run I felt no urge to return to any of the challenges.

After completing my first run, I felt no urge to turn back.

I did anyway, for the sake of this review, but repeated playthroughs didn’t do much to cash in. There are glaring problems with polishing this spaceship, to the point where certain parts of the cards look like they were plucked from a game running on Unreal Engine 2, circa 2005. It’s a shame your party’s characters have the same handful lines of speech repeat over and over to the point of bordering on high comedy. (They’re constantly yelling out the word “Goo.” You’ll hear it in your dreams.) Playing on PC with Windows 10 and an Nvidia GeForce RTX 2070 Super I ran into a chronic, fidgeting stutter that infects the frame rate and animation faithfully. , and if you shoot an alien in the head from behind, they fly to the ceiling – either an insect or a hilarious joke, I couldn’t see. The signage within levels is laughably maddening; there are no fleeting waypoints to be found, and I would often have to rely on the semi-audible speech lines announced by the party to know what to do with, say, the nuclear bus I just picked up. This was even worse when I tried to play with a group of bots (which Stray Bombay only recommends as a last resort) that were often tethered to geometry. And at one point I ran into a bizarre bug that made my entire interface unreadable, with an ominous red “X” crossed out on my character’s portrait. (For a moment I thought it was a mocking of the fourth wall, rather than just another little early access.)

Many of these oversights and bugs are to be expected in any game still in active development, and there is certainly a world where The Anacrusis irons out the problems in a reasonable amount of time. But what will we be left with after that? A more functional, but still uninspiring co-op shooter? That’s my fear. If The Anacrusis is going to be successful as it works towards a 1.0 release date, it just needs to find a more compelling spark.