The Gunk Review - All Gunked Up - Gamezigo 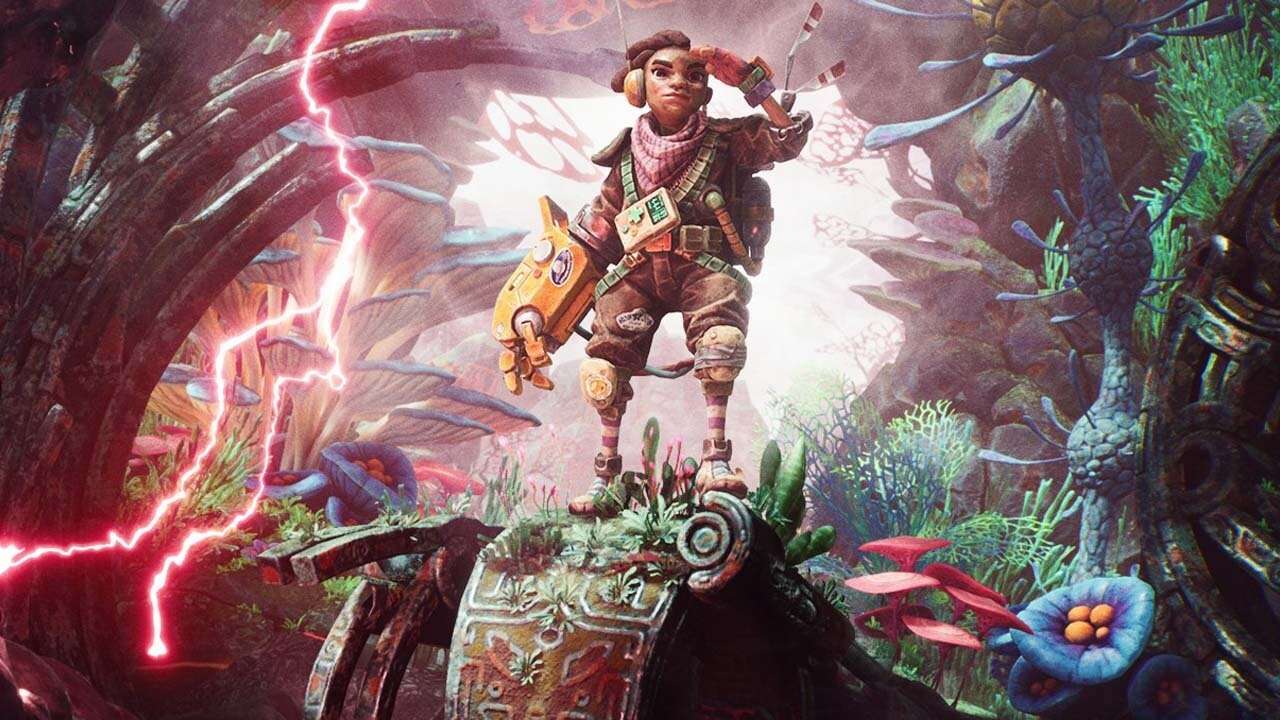 Home » The Gunk Review – All Gunked Up
Game Reviews

The Gunk Review – All Gunked Up

For some reason, the cleaning in video games is strangely satisfying. Cleaning up may be a tedious chore in everyday life, but games like Viscera Cleanup Detail, PowerWash Simulator, and Unpacking make cleaning a surprisingly engaging activity. Maybe gamifying heavy housework with rewards and goals is enough, or maybe the bottom line is that these games can even make you productive if you put things off. Anyway, The Gunk takes this formula and applies it to an alien planet in the far reaches of space. The first 3D title from developer Image and Form Games involves more than just cleaning up, but for all the other ideas it brings together, the most fun is clearing the planet of its titular mess.

Upon discovering that black evil gunk is sapping the planet of its life force, protagonist Rani sets out to remove the Gunk in order to restore the world to its former beauty. This is accomplished with an arm attachment she affectionately calls “Pumpkin,” which acts like a heavy-duty vacuum, allowing you to inhale the Gunk’s spherical masses until only a speck remains. Vacuuming the planet is the central tenet of The Gunk, while simple third-person platforming and puzzle solving encompasses the rest of your adventure. There are also rare battle moments, but cleaning the Gunk takes precedence. Every time you clear some of the debilitating sludge, the planet comes back to life as the flora and fauna emerge from their goopy prison. Watching a cold, gray, lifeless area suddenly radiating color and wildlife is reminiscent of similar mechanics in games like Okami and provides The Gunk with an inherently satisfying loop. If the game lasted longer than three hours, the rather labor-intensive act of cleaning the planet would eventually get old. Instead, it’s the rest of the game that suffers this fate.

Freeing the planet from the clutches of the Gunk isn’t the goal when you first land on this quirky alien world. As Rani, along with her partner Becks, you land on this unknown world to find a potential energy source that could be valuable enough to pay off your mountainous debt. Rani is the adventurous type, impulsive and eager to explore every nook and cranny of this unknown land, even if that means being reckless at times. Becks, on the other hand, is more practical and goal-oriented. She is overprotective of Rani and averse to taking risks, reluctantly taking on a mother role while staying with the ship and keeping in touch with Rani via radio. The couple’s relationship carries what is otherwise a pretty routine tale of uncovering the planet’s mysterious past. The inevitable conflict between Rani and Becks is predictable, but the combination of believable dialogue and successful voice acting makes for an interesting relationship, albeit one that feels too familiar.

And this familiarity seeps into the rest of The Gunk as well. Navigating the gloomy caverns and anomalous jungles of the planet is a routine experience, as The Gunk combines simple platforming with some rudimentary puzzles. Early on, for example, you discover a type of seed that grows into a huge plant when thrown into an energy pool, allowing you to jump on its branches and reach higher realms. This mechanism is repeated throughout the game and rarely deviates from the simple act of finding a nearby seed and throwing it into the correct pool. There are never variations on this simple process, and the only other type of seed you’ll find will function in exactly the same way. The only difference between the two types is that you have to lob the explosive version of the seeds at obstacles blocking your path, rather than throwing them into the planet’s glowing energy pools.

If the game lasted longer than three hours, the rather labor-intensive act of cleaning the planet would eventually become stale. Instead, it’s the rest of the game that suffers this fate

Neither The Gunk’s platforming nor its puzzles evolve beyond their humble beginnings. This laid-back design style can be relaxing at times, but the low stakes make it hard to get involved in Rani’s adventure. Combat is a distraction at times, and there’s coherence between the game’s action and its exploration thanks to the tools you use. Rani is a scavenger, not a fighter, so Pumpkin is used to defeat the planet’s aggressive critters in much the same way you would clear the Gunk. Smaller enemies can be sucked into the vacuum before being thrown together, while stationary projectile-spewing plants can be pulled from their roots, similar to how you pick up the planet’s seeds. This approach makes sense, but it also means the fight doesn’t stand out and acts more than anything as an intermittent distraction. The same goes for the game’s crafting system.

There are several resources scattered around the planet that can be collected and then spent on upgrades for Pumpkin, but this system gives the distinct impression that it’s included so you have to suck up more than just the Gunk. Other than an upgrade that speeds up vacuuming, none of the other items you can make are of any significance. The obstacles you face are already incredibly trivial, so improving your health doesn’t seem necessary, and the whole crafting system comes across as insignificant.

The Gunk’s calm approach would make it an ideal game for children, but the presence of a few inappropriate swear words negates that idea. Either way, clearing the Gunk and bringing the planet back to life still delivers a satisfying loop, and there’s something to be said for a game that doesn’t demand too much from the player. It’s fairly laid-back and relaxing at times, but even at three hours in length, The Gunk’s unambitious and routine design struggles to last an entire game. The endearing relationship between the two leads somewhat makes up for this, but you have the feeling that they deserve a little more than a harmless and rather forgettable game.

The Gunk Review – All Gunked Up

Rainbow Six Extraction Review – Get In, Get...