Bruce Straley co-created The Last of Us with Neil Druckmann, but you wouldn’t know it from the TV show credits. 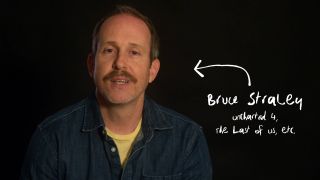 In the wake of its success as an HBO adaptation, The Last of Us has recently been hailed as one of gaming’s greatest stories, with Neil Druckmann widely created as its creator. But if you check the credits on Mobygames (opens in new tab), you’ll notice that the game director is actually a guy named Bruce Straley. And despite his deep connection to the game, and a long career at Naughty Dog, Straley said in an interview with the LA Times (opens in new tab) that he’s been completely excluded from the show.

Straley was an early hire at Naughty Dog—the 15th employee, he said on Twitter (opens in new tab) in 2014—and has credits on games including CTR: Crash Team Racing and the original Jak and Daxter trilogy. In 2007, he was one of two art directors on Uncharted: Drake’s Fortune, and then moved up to game director on Uncharted 2—on which Druckmann worked as a lead designer. The pair then teamed up for The Last of Us, with Straley as game director and Druckmann as creative director.

After The Last of Us, he went on to direct Uncharted 4, but he didn’t come back to work on The Last of Us 2; instead, he announced in 2017 that he was leaving the studio.

“After heading up three extremely demanding projects, and taking some extended time away from the office, I found my energy focusing in other directions, and I slowly realized this was the signal that it’s time to move on,” Straley wrote on the Naughty Dog blog (opens in new tab).

Since then, according to the Times, the relationship between Straley, who launched a new studio called Wildflower Interactive (opens in new tab) in 2022, and Naughty Dog has grown “strained.” And while Druckmann is visibly credited on the HBO show, Straley’s name is nowhere to be seen, and he’s apparently not making any money from it either.

“It’s an argument for unionization that someone who was part of the co-creation of that world and those characters isn’t getting a credit or a nickel for the work they put into it,” Straley said. “Maybe we need unions in the videogame industry to be able to protect creators.”

Unionization (opens in new tab) and crediting (opens in new tab) have become major issues for the game industry in recent years, and while this isn’t the most egregious example of game developers being frozen out by their former employers, it’s definitely not a good look. I’ve reached out to Sony and HBO for comment, and will update if I receive a reply.