Employees are struggling with virtual workplaces. 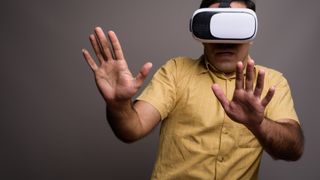 The daily meeting. Your company might have a fun name for it, like a stand-up or a team huddle. It’s a necessary evil most workplaces have to deal with. So if you ever find yourself thinking to yourself, “Wow, I hate these meetings.” Just imagine, if you will, doing those same meetings, but in the metaverse. Turns out, some companies have adopted this as their ‘virtual’ reality (hah), and to the surprise of no one, they seem like a mess.

A junior manager of a tech consulting firm, Accenture, shared her frustrating experience with Slate of simply hosting a meeting in a metaverse workspace. It required her to take off the headset and grab the two-factor code from her phone only to have the headset automatically go into sleep mode. Some of her coworkers flat-out missed meetings because of difficulty accessing the rooms.

During the rollout of the VR workplace at Accenture. An issue of accessibility came up with some employees. Some reported motion sickness when using the headset or were unable to use it all because of a disability. The company hasn’t given up though as it offers headsets to new hires.

The same employee told Slate that most of her colleagues don’t use the headsets much, mocking the whole thing as a “low-fidelity Minecraft virtual happy hour.”

Rahul Mehra, the co-founder of Roadcast, an India-based automation company, said that “low internet bandwidth speeds across South and Southeast Asia, lack of consistent and compatible software across different brands of hardware” has been a problem for his company.

He also said that more senior members of his company simply aren’t comfortable with the technology. Mehra still sees a use for the metaverse office for conducting job interviews and that incorporating this tech makes his company look “very forward-thinking” to the people he’s hiring.

The story goes into Slate’s own problems with the VR-at-work approach running into the same problems as everyone else, like co-workers forgetting to charge or update their headsets, and having issues like screen sharing from a desktop for meetings.

David Stern, the founder of the Slate Group Supporting Cast, sent headsets to a handful of his remote employees for meetings and the occasional VR hangout. He said that he’s “not sure it’s better for meetings, particularly if you’re doing a lot of screen sharing to look at someone’s desktop,” and these virtual meetings would likely be better for “having an open conversation or a brainstorm.” Stern admits that most of his employees’ headsets are used for “social gatherings” and says “the jury is still out on the productivity-centric use cases.”

I can see the appeal of a virtual workspace from a cost-cutting standpoint. On paper, buying a headset and having your employee work on three virtual monitors is cheaper than leasing an office space and buying actual monitors and various office equipment. But if employees are having issues just trying to attend meetings in the metaverse, it seems like it would be difficult to convince them to work an entire shift with a headset on. The VR office is still mostly in its infancy; I mean, Meta did just add legs to Horizon (opens in new tab) only a few short months ago.