Amidst protests, internet suppression, and government crackdowns, a gaming culture provides an escape 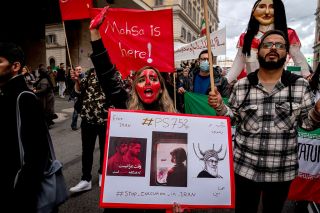 Tel and I have some things in common. We both work by day, and play games by night (Tel’s game of choice is usually DOTA 2). Both of our jobs involve using a computer, so we both end up spending most of our waking hours sat in front of a screen. Unlike me, however, Tel is living in a country in the midst of revolution.

It is October 2022. The nationwide protests in Iran, which still continue to this day, began about a month ago. Such is the depth and breadth of the government’s counterattack against the protests, the effects have by this stage trickled down to something as relatively benign and inconsequential as videogames. Due to the increasing severity of the regime’s response—which by this stage (January 2023) has escalated to executing protestors—our interviewee has been kept anonymous (Tel is a pseudonym).

“At first,” Tel says, “about a week into the protests, my friends said that Clash of Clans and Call of Duty Mobile are blocked because of the chat section. People were sharing information and pictures with mobile games. […] I think it was the second week of the protests that I tried to connect to DOTA, but none of the servers were giving me ping.” Other games affected include Call of Duty: Warzone and League of Legends.

This is just one symptom of a wider attack on online freedoms as a pushback against the protests. Connections have become unstable, and conventional access to the online world has been cut off. “We’ve always had censorship in Iran,” Tel explains. “Some games, websites, services, and apps were always censored. But since the protests began, they’ve restricted our use of the internet.” Such is the extent of this restriction, Iran is currently, in effect, only allowed access to one big intranet; a network consisting exclusively of Iranian websites and services.

This is relatively easy to bypass through the use of VPNs… which are illegal. “They don’t search for people who use VPNs. They just say it’s illegal. Some of the VPN providers in Iran are also working with the regime to capture info on people.”

Tel pushes through the restrictions to continue playing DOTA 2 (“I use one Iranian VPN to connect to the internet, and another on top of it to connect to censored websites or games”), albeit far less than they were able to before. With the use of VPNs, and waiting until after midnight when the ping becomes low enough to play, they manage perhaps two or three ‘turbo’ games of 20 minutes each. This escapism is important; they are not trying to ignore the turmoil of their country, just enjoy some brief respite from it.

At the time of the interview, Tel had taken part in three protests. “Two times I just helped some injured people,” said Tel. “One time I was trying to take photos, but [the police] took me and started to harrass me; but a group of protestors was near, and the police force just let go of me to deal with the protestors.”

“We have three types of forces in Iran; Police, Legion, and Army. Legion is directly part of the Supreme Leader’s office. They are the strongest in Iran, they have the most authority. Police forces are the main force to deal with civil problems […] when something big like these chain protests happen across the country, the Legion takes over. Police forces have to do something against the protesters, because it’s their job, but the majority of them don’t want to hurt people, they let people go if they can.”

Legion and police both respond to protests; it was the police who grabbed, and subsequently released, Tel.

“I am not saying the police forces are doing a good job,” said Tel. “If you are on the side of evil, you are the evil. They have as much guilt on their shoulders as the Legion has.” Indeed, the morality police – the force tasked with challenging women that are supposedly not covering their bodies sufficiently—is a unit within the regular police force. “Each city’s police force has to report a given amount of ‘bad hijab women’ to the Legion. They have to, because the Legion has the most power in Iran.”

Iran is a country poorly understood by much of the western world. In English-speaking media, if Iran or Iranians feature at all, it is often just as shallow caricatures of evil (Modern Warfare 2’s General Ghorbrani, and main antagonist Hassan Ztyani, being the most recent examples in the world of games). The government is tyrannical, and the country’s citizens suffer for it. This manifests itself partly through international trade sanctions; and partly, I learn, through Iranian citizens who enjoy videogames being denied access to much of what players in the rest of the world can enjoy. Tel has a plea for the industry on this note.

“Please don’t [deny] your games and tournaments and events [to] Iranians,” said Tel. “We have a lot of problems inside our country. We are fighting against censorship to be able to play. Some companies don’t allow Iranian IPs to connect to their servers. Some tournament organisers won’t let Iranian teams join their tournaments. We have a lot of great teams and players in Iran. We have a full Iranian DOTA 2 team, Winter Bear, which even played in DOTA 2 DPC division 2! I ask you to open your games and events to Iranians.”

This is just one symptom of ordinary people being punished for the sins of their government. While the imagery of the largely female-led protests tends to centre around the removal and/or burning of hijabs, the anger, determination, and bravery shown by those protesting is fuelled by so much more than a piece of clothing/. Indeed, one striking image I shall forever remember shows two women, one with a hijab and one without, walking down the street together (opens in new tab). I asked Tel to express what the Iranian people are protesting against.

“Against the lies and the cruelty of the regime. They spend our resources in war. They force people to follow rules that are against human rights. They deny that they are doing horrible things. They don’t work with great countries for our sakes because they are arrogant. All countries have restricted our access to their services, both on the internet and in the physical world, because our leaders are too arrogant to deal with other countries. We are fighting for all the dreams we had and the regime took from us.”

“This time, the people are not going to back down. They have more support from inside and outside of Iran. All the world is protesting for Iran. The first few years after the revolution, it’s going to be hard. Shortage of resources, chaos within the country. People not adjusting to the new rules. Defending against the foreign intruders. Let’s be honest, a few countries want to rule over Iran. It’s going to be hard, but we are ready for it and we accept it.”

It didn’t take long for Anonymous to join the fight against the Iranian government, launching what they call “Op Iran”. Ever since, the hashtag #OpIran has been used across social media to tag posts criticising the regime or providing updates on the protests, including by actor/comedian Omid Djalili (opens in new tab). On Twitter for example, hundreds of tweets using the hashtag are, at time of writing, posted every hour. People have also added the hashtag to their gaming and social media usernames.

Tel uses computers for both work and play. Now that their access has been severely restricted, they’ve used this as an opportunity to re-evaluate their life. “In my free time, or the time that I can’t join the protests, I’m going to enjoy nature instead. I’ve been using the internet and computers 16 hours a day for far too long. I think I need to disconnect a little. What better time than this?”

Protests spread across Iran as recently as 2019—and 2017, and 2009—but there is a sense within the country that, this time, it is different. This time, it is just the beginning. These protests began in September 2022 after a young woman named Mahsa Amini was arrested by Iran’s morality police, because they did not deem the way that she was wearing her hijab to be sufficient. Shortly afterwards she died in hospital, reportedly as a result of police brutality (something that Iranian authorities continue to deny). “This in fact is the beginning of a revolution,” said Tel, before telling me the people’s slogan. Three simple words; “Woman, Life, Freedom (opens in new tab).”