Your best chance yet to see what Hyenas actually is. 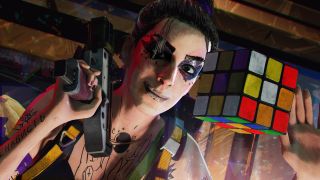 Creative Assembly, the folks that make all those Total War games and once upon a time also made our 2014 GOTY Alien: Isolation (opens in new tab), is releasing an extraction shooter sometime this year. It’s called Hyenas, and despite some members of the press and early playtesters getting a good look at it last year, publisher Sega has not publicly shown off the game since its reveal.

That’s why this weekend should be particularly interesting—Creative Assembly is ramping up its playtests between January and April, with the first of four alpha weekends beginning tomorrow, January 20. You can sign up for the playtests (opens in new tab) on the official Hyenas site. Be aware that you’re not guaranteed access (I’ve yet to be invited myself). Here’s the full alpha schedule:

PC Gamer features producer Mollie Taylor saw some potential in Hyenas when she sat in on a 20-minute preview (opens in new tab) at last year’s Gamescom, but noted that a lethal dose of “metacringe” got in the way of what seems like a pretty cool hero FPS: “Here’s what I do know: it’s a PvPvE looter shooter that’s a little too desperate for you to know how quirky and self-aware it is. It’s colourful and bombastic but also so deeply, deeply cringe.”

I’m tired of hearing about Hyenas. I want to play it, or at least see what it actually looks like in motion. Is combat all about momentum and movement mechanics like Apex Legends, or more of an Overwatch dealio with chunky health bars and cooldown management? We do know it’s an extraction shooter, so maybe it’ll be paced more like Hunt: Showdown or Escape From Tarkov, where you can establish your own goals and leave a match early if you’re satisfied.

The only official gameplay I can find of Hyenas is a single, comically short 13-second clip shared by the game’s official Twitter last month. It is, as advertised, a “first glimpse” at zero-g combat.

It’s time. This is your first glimpse into HYENAS Zero-G combat. #JoinThePack to see more! pic.twitter.com/teZxWCJDnqDecember 1, 2022

In any case, don’t expect a full gameplay reveal this weekend. Earlier playtesters all had to sign NDAs restricting them from sharing footage or talking about the game and I suspect this time is no different. That said, someone somewhere will almost certainly ignore these restrictions and upload a full match of Hyenas anyway, so keep an eye out.