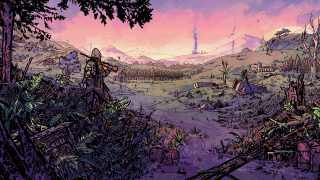 This is it. This is the run. You’ve stocked up on ammo and bandages, medkits and bottles of water. You’ve bought a headlamp and fancy attachments for your favourite gun. Having met ZERO Sievert—a top-down Stalker-like—on its own terms, you’ll finally last more than a minute before you—

Bang. A single gunshot, issued by a bandit with a sniper rifle. Or, perhaps, you stumble into a pack of wolves. It could be ghouls spitting acidic blood, or deadly anomalies guarding expensive relics. Actually, it’s all of them, ending countless runs in ZERO Sievert before they’ve even begun.

Somehow, it’s taken this long for a game to truly channel the Stalker series, but I thought of those classics often as I trudged through the wildernesses of Zakov: a hostile zone surrounding an exploded nuclear power plant (sound familiar?). It’s a top-down shooter, rather than an FPS, but otherwise feels like a close sibling.

It isn’t just the unflinching difficulty, the sudden deaths, and the odd nuclear anomaly strewn haphazardly about—more than anything, it’s the atmosphere. The driving rain or enveloping fog, the pregnant silence as you explore the wilds. It’s the crackle-clack of your Geiger counter as you stray too close to a roving electrical cloud, and the distant gunshots making your heart leap as you scramble for cover.

As in Stalker, you play a rookie venturing into the zone, accepting quests or simply scouring the place for supplies. There’s a home base, the Bunker, which is where you trade, accept quests from NPCs, and store your surplus so your beautifully grid-based inventory isn’t too bogged down. You have a workbench, a sheaf of crafting recipes, and a place to sleep so you can venture out at different times of day. The Bunker is your haven, as here you’re safe from attack, and your hunger and thirst meters are blessedly paused. And you’ll return here after every death—or, more rarely, after every successful mission.

There are currently five locations outside the Bunker, with a few spaces left on the map menu to be filled in during the Early Access period. They don’t form a contiguous world, but are instead separate areas you reach by train and a long loading screen. In each map—say, the Forest—it’s you alone against bandits, or boars, or whatever else the procedural generation has conjured up. You have to make it to one of the extraction points, while gathering as many supplies and quest items as you can carry.

Take it slow, is my advice, as you make your way across each randomly jumbled map. The only real time pressure is your need to occasionally eat or guzzle down a refreshing beverage, so you can afford to be careful. Combat, however, is swift and unforgiving, with more powerful guns capable of offing you immediately, and even grazes capable of inflicting seeping wounds. Take too long to apply a bandage—you remembered to bring bandages, didn’t you?—and you’re a goner. But be sure to cower behind a rock while the painfully slow—come on, get on with it—healing animation plays.

So, you inch across the map. You take potshots and heroically run away. You learn how to deal with recoil, which can make the reticule sway like a mechanical bull. ZERO Sievert compensates for its simple pixel art with high-definition sound effects, whether it’s the /chonk/ of a shotgun blast, thunder cracking the sky open, or a downpour hammering the forest floor. You might play from a top-down perspective, but this is as immersive as any first-person shooter.

As you can see all around the protagonist, you might expect to be able to, well, see all around the protagonist. However, important elements, including enemies will only show up in their immediate field of vision. I was surprised countless times as ghouls appeared behind a fence, or a bandit was suddenly waiting round a clutch of trees. And then I’d flee, panicking as I tried to remember which key I’d assigned to the flipping bandages.

The inverse is true, thankfully—your enemies need line-of-sight as well. You can lose them by hiding behind things, such as the faintly radioactive cars, or by simply running round a building to the other side. Creep back out, very slowly, watching the perimeter of your vision cone. Then click for dear life as the bandit emerges. Are they… are they dead?

You can tip the odds in your favour, sort of, by venturing into a location at night. You can’t see much—only the area around your headlamp, which you hopefully remembered to buy—but neither can your enemies, who have the disadvantage of being unaware of the hunter stalking towards their camp. Night is properly dark, making you easy prey for hidden wolves and boars, but if you can just save up for those night-vision goggles—and that sniper scope for your rifle, while you’re at it—you may decide to exclusively head out after sundown. Your reason to persist, after countless deaths, is the tantalising spread of character upgrades—be they guns, attachments, armour, gadgets, or perks you can earn by levelling up.

There’s a lot of content here already, including some of the most sophisticated gunsmithing I’ve encountered in a game. There are dozens of guns and multiple ammo types, and every constituent gun bit can be customised. You could spend an age comparing their stats in front of the workbench. I found it hard to remember which ammo was which, as I was browsing the shop menu, but it was thrilling to down a bandit and discover an expensive new rifle, which I would then be able to improve back at the base.

Brilliantly, looting containers or bodies is a risky process that can take some time, as every item is revealed one-by-one. Are you absolutely certain you took all of the bandits down? Remember that you still have to make it to an extraction point after you’ve found those quest items or that fancy new gun—die and you’re unceremoniously dumped back at the Bunker.

I made it through Stalker: Shadow of Chernobyl (opens in new tab) by rebinding quicksave to the right mouse button, incrementally saving and reloading through the tougher encounters. There’s no quicksaving or manual saving here, so you lose everything when you die in the wild. Or at least, everything you had found after the train deposited you. (Thankfully, the state of your inventory before the mission will have been preserved.)

Still, it’s frustrating enough, and I wasted hours as I tried to advance the game, by completing a quest for the train driver that would unlock the later areas of the world.

The sticking point was a propane tank. I had seen one before accepting the quest, and foolishly left it behind, so I knew them to be stashed in the Forest somewhere. Cue countless excursions, most ending in sudden death, and only a few in which I discovered the propane tank in a random container. Once I had finally found it, I then needed to reach an extraction point, and every time I would be mauled or murdered along the way.

I’m not saying it wasn’t a satisfying, punch-the-air moment when I eventually hauled that stupid tank back to the Bunker, and unlocked the last three maps, but I would also quite like those hours of my life back.

Still, I should be grateful ZERO Sievert hasn’t dipped both feet into the roguelike quicksand, by wiping the entire slate clean each time you die. Being thrown back to just before an outing—effectively undoing it—can be a blessing sometimes, if you had wasted bandages and medkits and piles of ammo before some ghoul put you out of your misery.

The procedural generation keeps the game from feeling repetitive, as you step out into the Industrial Area or the Mall or Swamp for the umpteenth time, and it also stops you getting too comfortable with the layouts. The thrill of exploration lies in not knowing what lurks around each corner, even as you come to learn broadly what you can expect from each environment.

This long after Stalker—and while we wait, beside the campfire, for its long-awaited sequel (opens in new tab) to arrive—it is thrilling to play a game that captures some of what made those games so special. More locations, and a faction system, are on the way during the Early Access period, but personally I’d like to see the world simulation enriched. Humans and creatures will fight, if they happen to come across each other in the wilderness, but this is otherwise not a world that feels especially dynamic, and I feel that’s the missing piece to the Sievert puzzle. If developer CABO Studio can nail that, it will be onto something special.