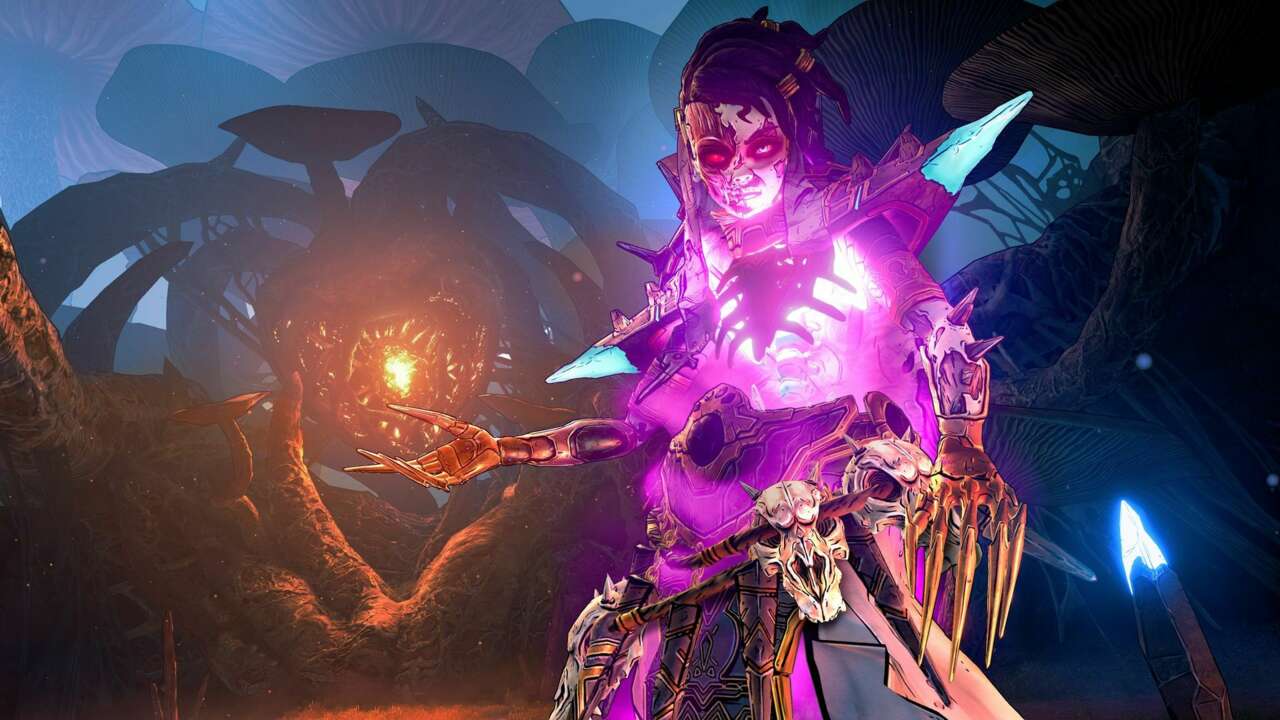 
As a direct sequel to the Dungeons & Dragons-inspired Tiny Tina’s Assault On Dragon Keep DLC for Borderlands 2, Tiny Tina’s Wonderlands leans even further into the structure of tabletop roleplaying games for its gameplay. Wonderlands incorporates a more robust character creator, the option to multiclass, and a whole lot of other mechanics and features that D&D fans will likely recognize.

The character creator in Wonderlands represents one of the biggest departures from the structure of the Borderlands games. Wonderlands doesn’t feature established characters. Instead, you customize your own hero, including their race, physical appearance, voice, and personality.

“Your voice, your appearance, all of that is independent,” Tiny Tina’s Wonderlands senior producer Kayla Belmore told GameSpot. “You get to choose your own voice and some other fun stuff that we can’t quite dive into yet, but it goes into even your character’s personality, not just aesthetics, and it’s all independent. You could look and sound however you want within those sets of choices. We don’t really tie the player into any one thing. Not even every feature is humanoid–you can have shark fins on your head or look like an orc.”

Tiny Tina’s Wonderlands creative director Matt Cox added that the character creator is completely separate from your abilities and skills. That means there are no character-specific items in Wonderlands, either. “We want you to be able to express your visuals and your play style, the way that you want,” Cox said.

This philosophy extends into the skill trees. Wonderlands will have six distinct classes to choose from, each with their own unique skill tree–developer Gearbox Software will share more specific details about each one at a later date.

“There’s two different aspects of our character creation,” Belmore said. “One is the aesthetic piece where you can choose what you look like, and then there’s the character classes. Each character class will have abilities that our fans are accustomed to seeing, and deeper into the game, you’ll be able to have the option to multiclass.”

The ability to multiclass will, supposedly, allow for players to put together some bizarre but powerful combinations. When I asked how that would work–using the hypothetical of a player combining Borderlands 2’s Gunzerker with Borderlands 3’s Siren as a possible example–Belmore confirmed I was on the right track. She did not yet want to confirm that either class (or anything like them) would be in Wonderlands, but in terms of what players will be able to expect, that’s the idea. You have the option of taking two completely different skill sets and putting them together, which is a very tabletop RPG concept.

“You’ll choose your primary class and then later in the main story, you will be able to slot a secondary class and mix and match those two classes and skill trees–that’s your character for the campaign,” Cox added. “But once you beat the plot, you will be able to go back and respec your secondary class. So you’ll still have to stick with your primary class, but you can try a different secondary.”

Your ability to shape your character doesn’t end there–there’s more to do beyond the skills you’ll unlock via your primary and secondary classes. “You also have hero points to spend as well in very classic [Dungeons & Dragons] attributes,” Cox said. “And those all speak to different things like a melee attribute or a spell attribute or a skill cool-down attribute–it’s like a character sheet.”

According to Cox, you’ll be able to put hero points into your strength, dexterity, intelligence, wisdom, constitution, and attunement. These hero points are separate from the skill points that you’ll also earn throughout the game. Skill points apply to the more traditional skill trees, where you can unlock new abilities and perks. Hero points build out your character so they can more easily specialize as a specific class.

“You do have one sort of unique attribute that lives outside that list of ‘hero stats’ and that’s luck,” Belmore added. “And that is something you can affect by completing an endgame challenge. And the luckier you are–the more of this challenge you do–the better your loot chances are at higher rarity.”

But before you reach the endgame, you’ll have to overcome the main campaign of Wonderlands, and that means dealing with Tiny Tina. Wonderlands takes place immediately after Dragon Keep, so Tina is back to her rambunctious 13-year-old self as opposed to the older, slightly more adjusted 20-year-old Tina seen in Borderlands 3. As the bunker master, Tina is in control of the campaign, and so much like Dragon Keep, she’ll step in to set the scene, crack jokes, or roleplay, akin to a D&D dungeon master.

“That’s one of the great things about Tina: that chaotic energy,” Belmore said. “It lends itself so well to the idea of a tabletop RPG where you have this unhinged bunker master. And she absolutely will shape the world in the way that she sees fit, which has huge effects on everything. The story itself is not reactive. It’s like [Tiny Tina’s Assault On Dragon Keep] where it’s just Tina playing out the plot line.”

Some of that plotline will now take on a third-person perspective, another departure from the Borderlands’ formula, which always plays out–in both gameplay and cutscenes–in first-person. When travelling from place to place, Wonderlands will pan out to a tabletop view, where you’ll see yourself (and your allies if playing co-op) as miniatures.

“We call it the Overworld,” Belmore said. “So one of the ways you can explore the greater world is through this pulled back, third-person view. We have a fairly linear main plot, with tons of side missions. In addition, with some exploration, you can find these five optional maps that–if you’re a tabletop RPG nerd–act like modules. So they are connected to the main story, but they are also their own standalone plots.”

“You can have dynamic encounters,” Cox added. “So you can have a little enemy pop up and then you’ll get transported seamlessly into first-person combat where you do a small fight, get your loot, and pop back out to further explore the entire Overworld. So Overworld really just acts like–compared to previous games we’ve done–as the big zone that connects all of the experiences.”

“And the customization you choose actually shows up in your bobble head character as well,” Belmore excitedly said.

In spite of these departures from the formula that Gearbox has established with the Borderlands franchise, both Cox and Belmore said that, fundamentally, Wonderlands plays like a Borderlands game. This is still a loot shooter, though Gearbox has taken steps to improve upon Borderlands’ formula.

“We wanted to make sure that we embraced the strength of what we do best, and that looter shooter loop is going to feel very, very familiar to fans of our games,” Cox said. “But instead of being preoccupied with how many guns are in the game, our focus is more on the diversity of types of fantasy weapons that you can have. So it’s really more about the breadth of fantasy gear, rather than ensuring a high tick mark on how many guns we have.”

He continued: “We still have our procedurally generated loot, so you’ll definitely see different parts on the melee weapons and different abilities for spell books. But it’s more about the new types of gear that you can combine into a meaningful experience so you can play how you want to play.”

“And even some things about the guns have changed,” Belmore added. “You’ll see different firing mechanics than you have in previous titles and the addition of crossbows and magic based-barrels, which are definitely a little bit different from what we’ve done before.”

“If you’re just out of melee range when you melee attack, you will glide into your enemy,” Cox said. “It’s like an auto glide. So you can sprint and slide like in Borderlands 3, and then if you melee at the end of your slide within the right distance of an enemy, you can continue gliding straight into the enemy and close the distance in a really fun way.”

“It’s as satisfying as it looks,” Belmore added.

During our conversation, I also pressed Belmore and Cox for additional details about Wonderlands’ story and narrative themes, as well as the game’s endgame content. Both promised that players will have more detailed looks at these aspects of Wonderlands ahead of its launch, which is fast approaching.

Tiny Tina’s Wonderlands is scheduled to release for Xbox Series X|S, Xbox One, PS5, PS4, and PC on March 25.