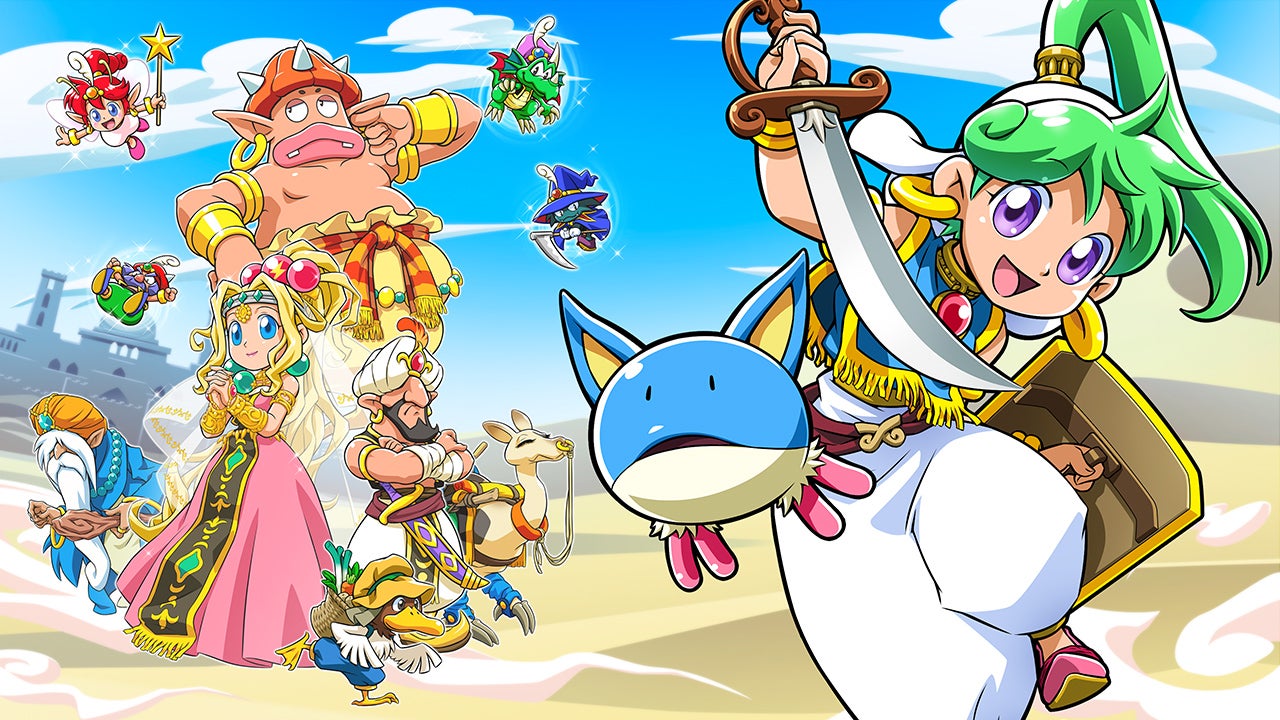 
There was a time not too long ago where some games never left Japan. It didn’t matter if they were the next entry in a beloved series or some genre-twisting mashup. Monster World IV was one such game on the Sega Mega Drive, the last in a well-known series that for whatever reason never made it to the American Genesis like its predecessors did. Remade and released now as Wonder Boy: Asha in Monster World, this formerly 16-bit classic retains everything that fans loved about the series back in 1994. Unfortunately, it is no longer 1994, and this dedication to old-school platforming fundamentals makes Asha’s adventure a museum piece rather than a triumphant resurgence.

Like the retro original, Asha in Monster World carries on mechanically from previous Monster World games but presents a brand-new journey with only a few ties to the ongoing story. Asha was born with a gift to sense spirits, and their cries for help serve as a call to adventure. Over the course of around five hours, Asha saves a quartet of helpful sprites that series fans may remember from Wonder Boy in Monster World and foils the shadowy plot to contain them. It’s a simple tale that works for a colorful platformer like this, providing good motivation without getting in the way of the action.

Improving a classic like this seems like a slam dunk, and general nostalgia for the 1990s has produced a bunch of remasters and remakes that breathe new life into old favorites. In the case of Wonder Boy: Asha in Monster World, a new coat of paint can’t hide simplistic gameplay and outdated mechanics.

Asha in Monster World is a straightforward action game featuring a hero whose moveset consists of a single sword swing, a rechargeable “magic hit” for extra damage, a shield for defense, and aerial attacks that go up and down. The only other interactions in each level come from Asha’s floating puffball of a pet, a fantastical creature known as a Pepelogoo that Asha can throw to retrieve items located off-screen, push buttons, or climb up plumes of lava. Grabbing onto its feet is also the only way to perform a double jump. It’s a wide variety of moves when compared to other Genesis action games, but it’s crushingly limited compared to most similar games we see nowadays.

Take the double jump in particular: Monster World’s four levels take full advantage of this extra height once Asha learns the move, laying out paths that need you to make several in a row to proceed. In most games, this means simply hitting the jump button twice, but in Asha’s adventure, there’s an extra button press and a time buffer whenever she needs the Pepelogoo to give her some added distance. The creature also evolves over time and gets too heavy for Asha, forcing her to stand still as she holds onto her pet instead of running around freely.

It’s only when playing each version side by side can you see how faithful the developers are to the original.

To modern eyes, all this fiddling with Pepelogoo to accomplish jumps that almost any other platforming hero could easily clear feels less like interesting design and more like a simple waste of time, and it’s not the only instance of this. The levels have plenty of examples of backtracking for simplistic puzzles, rote memorization, and times where a needed key spawns directly next to a locked door. These are the type of gameplay elements that games left behind for a reason, and they’re the biggest cause of why Wonder Boy: Asha in Monster World doesn’t stand up to modern scrutiny.

The physical edition of Wonder Boy: Asha in Monster World comes with an English edition of the 1994 game. It’s a great bonus, and it’s a shame that not everyone has access to it. It’s only when playing each version side by side can you see how faithful the developers are to the original. It’s a shot-for-shot remake in the vein of Zack Snyder’s Watchmen, only with a layer of cartoony cel-shading instead of pixels.

What We Said About Wonder Boy: The Dragon’s Trap

I had just as much fun during my six- or seven-hour playthrough of Wonder Boy: The Dragon’s Trap as I have with many of its contemporary counterparts. While its antiquated roots cause some minor frustration with unreliable hitboxes and unnecessary grinding, the foundational combat and exploration is still engaging and fun after 30 years. From long-time Wonder Boy fans to platformer enthusiasts who’ve never heard of it until now, you’ll likely be able to find whimsical fun and a neat bit of genre history in this charming adventure. – Jon Ryan, April 17, 2017

Different people will prefer different styles, but the original presentation put me more in the right mindset for what was to come. The new graphical treatment might set expectations for a game that’s evolved from its original era, and that makes simple things like the lack of mid-level checkpoints and limited healing items all the more frustrating.

If you do happen to prefer the newer look of the Wonder Boy: The Dragon’s Trap remake and the spiritual sequel Monster Boy and the Cursed Kingdom, it’s worth noting that Wonder Boy: Asha in Monster World’s modern graphics are a significant downgrade from both of those games. The bright colors and simple designs all mirror the classic well, but there’s no style to the translation. The simplicity makes Asha’s world look like a cheap Wonder Boy knockoff rather than a long-lost entry in the series.

Thankfully, it’s not all doom and gloom for the new version, which does include a few colorful cutscenes that expand on important moments in the story in fun ways. NPC dialogue scrolls at a much more reasonable pace when compared to the original, which makes the forward-thinking meta humor in the town square all the more enjoyable. The soundtrack is also improved with many renditions of a main theme, although it can get repetitive on some of the longer levels.

Cyberpunk 2077 Returns to the PlayStation Store, But...