I don’t mind rebuilding the continent, but no one should ask me to redecorate it. 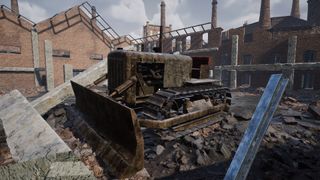 I am a one-man Marshall Plan (opens in new tab), a whirling dervish of hammers and girders, flitting from ruin to ruin like a hummingbird in a hard hat. England’s green and pleasant land is pockmarked and rubble-strewn in WW2 Rebuilder’s brief demo (opens in new tab), but I have the tools to repair it. Using whatever materials I can scrape together from within each of its levels, it’s my job to cut off the burnt ends, fill in the potholes, and otherwise restore—in a thousand tiny ways—a country still reeling from six years of war.

It’s… relaxing? A first-person amble around bucolic English countryside, quietly fixing things up. It’s a strange thing to say about a game that seems like it’s earnestly trying to capture the forlorn grit of a generation confronted by the wreckage of the most destructive war in human history, but I can’t think of a better way to describe WW2 Rebuilder than as a kind of sombre PowerWash Simulator.

The game features levelled levels across three countries: the UK, France, and Germany, and only two levels in the UK are available in its demo (though there is a free Germany Prologue (opens in new tab) if you fancy rebuilding Hamburg). The first is a short tutorial that shows you how to break down war-worn things in order to fix a well and repair a gutter, but the second takes you to Gimbert train station, a fictional recreation of the aftermath of the real-life Soham rail disaster of 1944 (opens in new tab).

WW2 Rebuilder takes you to France, Germany, and the UK, but only the latter is available in its demo version. (Image credit: Madnetic Games) (opens in new tab)

The station’s a mess. The railways, ruined by explosions, now arc toward the sky rather than toward London, so it’s on you to roll up your sleeves and sink into the pleasing rhythm of work. Hammer out, you march around knocking down walls that can’t bear their weight, pulling up weeds, and laying the foundation for a rebirth. I proceeded in passes, going over the level once to break down all the useless debris into usable raw materials—bricks, metal, wood, and the like—and then going over it again to rebuild or repair what remained.

It’s satisfying, in the way these kinds of games usually are. Like watching someone painstakingly repair damaged artwork, seeing Gimbert slowly transform from a grim wreck to a sparkling exemplar of post-war reconstruction is a rewarding procedure. Plus, earning ability points to spend on your capacity to hold materials, your walk speed, or what I can only describe as Builder Detective Vision (a radar ping that highlights usable and fixable objects in a certain radius) as you progress in a level makes for a rewarding if familiar loop. By the end of my time with the game, I was such a powerful builder that I was more of an event than a person: zipping round at a thousand miles per hour, my pockets weighed down by tonnes of metal and wood, leaving things good-as-knew at a rate unmatched by any other mortal on Earth.

It was at this point of laying the wall, brick by paintsaking brick, that I began to wonder if we even needed them as a species at all. (Image credit: Madnetic Games)

I think this is called rendering? Or maybe plastering. Look, I’m not cut out to be a builder, okay? (Image credit: Madnetic Games)

I have never been prouder than I am in this moment. (Image credit: Madnetic Games)

You even get to make some choices about what the new Gimbert will look like: A big yellow construction sign helpfully informs you that the previous platform canopy has been obliterated, leaving you to decide whether to prop up a simple gazebo or to go for something more elaborate. Naturally, I opted for the most grandiose thing on the menu, leaving me cursing my own hubris when that meant I had to spend even more time scouring the level’s nooks and crannies for the necessary bricks, wood, and metal.

When all else is done, you have to decorate the station to earn your final ability point. There’s all sorts of things you can build: clocks, street lamps, flags, all kinds of period-appropriate furnishing to really make Gimbert pop. How much you can build is limited by your supply of materials, or the special builder-currency you can use in their stead, but neither of those is in short supply. I’m not really one for design, though, so I just built three statues of Saint Mary and a phone box and put them on the train platform. Welcome to Gimbert: May the Lord bless you and keep you, but you can call him if you have any complaints.

Apart from one alarming moment where it fell to me to disarm an undetonated German bomb, entailing a lockpicking-style minigame where I had to twiddle a dial just right before snipping a wire, it’s all very House Flipper. Until the ghosts show up, anyway. As you make your rounds through Gimbert station, you’ll occasionally wander through an inky black humanoid mass, at which point you’ll be transported back to a voiced memory of the wartime event that brought Gimbert low in the first place.

These are fairly short, amateurishly but earnestly voiced, and do a really good job at making you feel bad about not taking this whole thing seriously enough with your idiotic Saint Mary stunt. These, combined with the collectibles—letters, wartime posters and the like—are the main things that set the game’s basic loop apart from its fellow to-do list games. That’s probably enough to pull in a history obsessive (like, uh, me), but I don’t know that WW2 Rebuilder felt like it had much to offer that a Hardspace Shipbreaker or House Flipper didn’t.

Still, it is nice to play a WW2 game that focuses on creative and life-affirming aspects of human ingenuity and endurance. And in our current trying times, it’s good to be reminded that we do have the collective capacity to build ourselves out of a hole every now and then. So if you’re on the hunt for a good podcast game—post-WW2 vibes to relax/study to—you could do much worse than giving WW2 Rebuilder a whirl over on Steam (opens in new tab).